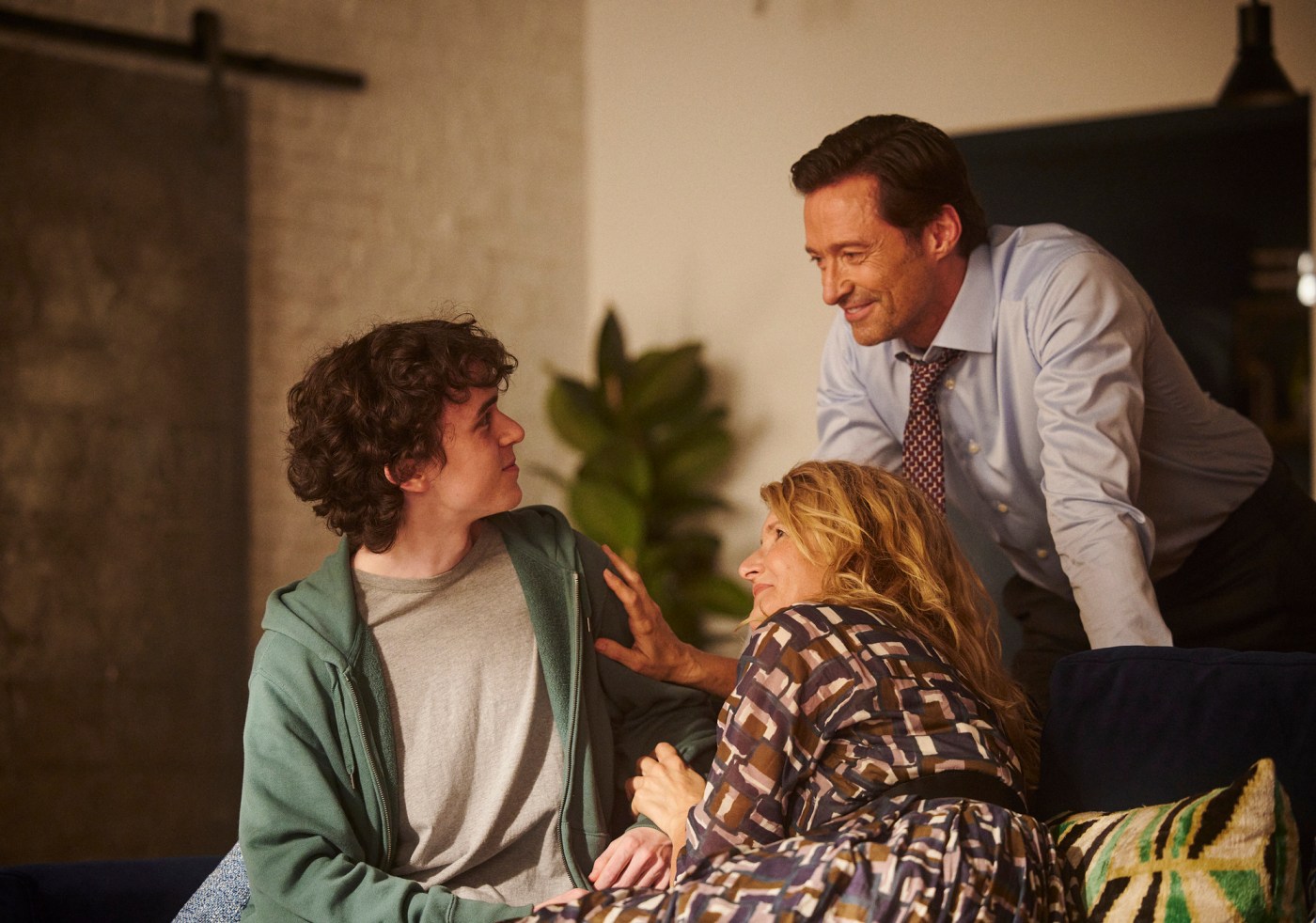 If you don’t have children, you will likely walk out of “The Son” shaken and deeply moved. If you do have kids, you may have to be eventually pulled to your feet after collapsing into a fetal ball for several hours.

Writer-director Florian Zeller’s second installment in his trilogy examining mental health is an emotional wrecking ball almost exquisite in its destructive power. If his previous film, “The Father,” needed a trigger warning about dementia, “The Son” needs one for depression and suicide.

Despite the title, “The Son” is really about the father in this story, Peter, a successful workaholic Manhattan lawyer on his second wife and second child, a newborn. Past and present collide when Nicholas, the 17-year-old son from his first marriage, reaches a crescendo of mental anguish.

“It’s life. It’s weighing me down. I want something to change, but I don’t know what,” he cries. “I feel like my head’s exploding.”

But neither dad — Hugh Jackman, in easily his finest work onscreen — nor mom, Laura Dern in another heart-led performance, can seem to help. Zen McGrath plays the son with stunning agony, his hooded eyes flickering as if he’s being hunted.

Zeller, adapting his play for the screen together again with translator and co-screenwriter Christopher Hampton, grounds everything in an unblinking realism, letting the words carry and avoiding any visual tricks, except for a shaky camera when it focuses on Nicholas.

One quiet symbol that recurs is of Peter shown often at an elevator bank, his vertical world going up and down. But at his home, the filmmakers show a constant churning washing machine — lines versus circles.

None of the parents in this high-class world — including stepmom Beth played by Vanessa Kirby — seem to know how to help this young man stuck in a domestic no man’s land or even how to speak to him.

Jackman’s Peter addresses his son as if he were in a sales meeting (“Soon everything will go back to normal”) and even offers him a fist-bump. He and his mom have a chopped shorthand, with fractured dialogue. (“Call me,” “Don’t…” and “Don’t cry, my little sunbeam.”)

Restless and in mental pain, the son goes from one parent’s home to another, skipping school and just wandering the city. “What’s going to become of you?” his dad demands, confusing the byproduct for the root issue.

In one heartbreaking scene, dad, stepmom and son dance in their living room to Tom Jones’ “It’s Not Unusual” and the camera soon closes in on the adults blissfully smiling as they let loose, unaware that the son long ago dropped out.

The son’s anger at his father for leaving his mother buries the film in guilt that eats away at the dad, who starts to drift off in meetings. He then has a wonderfully tense visit with his own father (Anthony Hopkins, though not playing his same role in “The Father.”) Peter tells him he may turn down a job to care for his son, which his father sees …read more

Leva Bonaparte from Bravo‘s Southern Hospitality said her husband Lamar would have fired Grace Lilly years ago, but she wants to give her one more chance … but Lilly’s endless list of excuses isn’t doing any favors. Bonaparte called Lilly out during the first episode for leaving her shift at Bourbon N’ Bubbles after Maddi […]

DANVILLE – Nicholas Moseby was two months into his first-ever teaching job at San Ramon Valley High School when two freshmen girls warned campus administrators about a troubling comment he made. “He whispered, ‘You are lucky you guys are hot,’” according to one girl’s written account in October 2021. More complaints followed, in February from […]