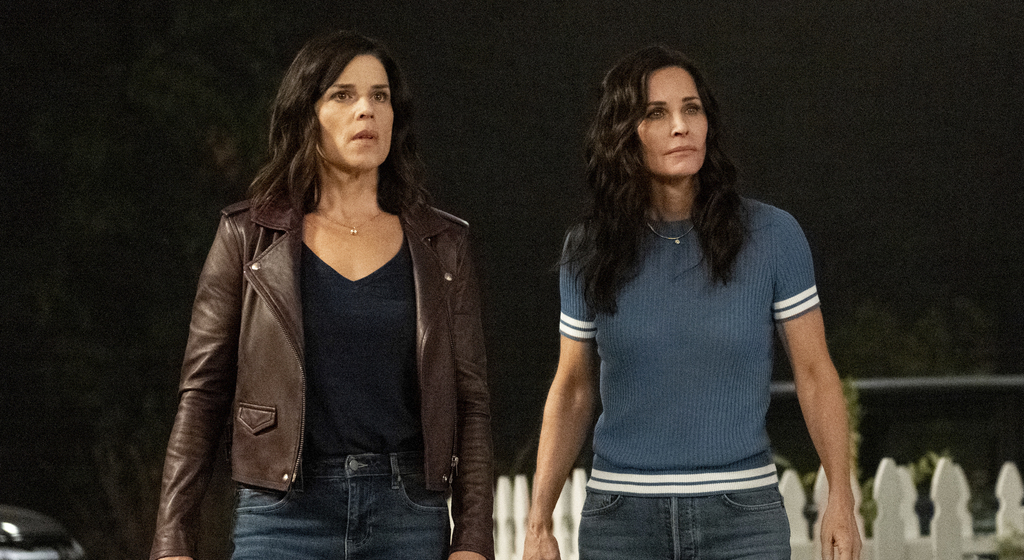 Twenty-six years after the original, “Scream” calls again. We’re now up to the fifth film in the franchise, but the first since 2011’s “Scream 4.” Enough time has passed that this one, titled simply “Scream,” bears no number, no caller ID. That’s presumably because this “Scream,” which features the original cast and introduces a new generation of callers and stabbers, is sequel and reboot in one. Or, as one character explicitly defines in “Scream,” a “requel.”

Part of the charm of the original “Scream,” a glossy, couldn’t-be-more-’90s slasher, was its knowingness. Wes Craven’s film, written by Kevin Williamson, made a plaything of genre conventions by having the characters openly discuss horror tropes while also being bludgeoned by them. The bright idea of the new “Scream” is to double down on the meta. Here, the long-running “Stab” movies — the fictional stand-in for the “Scream” franchise — is mocked as cheeseball shlock. In the movie’s opening phone call, one that mirrors the call Drew Barrymore received in the original, Tara (Jenna Ortega) — after initially ignoring a strange call on “the landline” — tells the strange voice on the other end (again Roger Jackson, franchise MVP) that she prefers “elevated horror” like “The Babadook,” “Hereditary” and “It Follows.”

It’s easy to chuckle (and agree) with such winking pronouncements. There’s a lot of such self-referential jokes in the new “Scream.” But that’s about all there is.

What really is the legacy of “Scream”? Most, I suspect, hardly recall the three sequels. The original got a big boost from the personalities of its performers, among them Neve Campbell, Courteney Cox, David Arquette and Matthew Lillard. (All but Lillard return here.) But, like Tara suggests, the “Scream” movies seem like quickly aged relics — particularly when you consider that they were the products of Harvey and Bob Weinstein. If anything, “Scream” persists mostly because Ghostface, its killer’s trademark Edvard Munch-like mask, remains a Halloween staple.

Filmmakers Matt Bettinelli-Olpin and Tyler Gillett (who helmed 2019’s “Ready or Not”), working from the script by James Vanderbilt and Guy Busick, don’t offer up much reason for a retread beside some kitschy killer nostalgia, more fun with phones and enough self-mocking irony to almost distract from how thin the movie is.

Working in their favor is a solid young cast, including Ortega, Melissa Barrera (“In the Heights”) and Jack Quaid (son of Dennis). Tara’s near-fatal encounter in the film’s first scene draws her estranged sister, Sam (Barrera), to her bedside. Sam arrives with her boyfriend, Richie (Quaid), who professes unfamiliarity with the “Stab” films but proves a quick study at their rules of survival. We are back in Woodsboro, California, the setting for all the “Scream” films and site of the murders said to inspire the “Stab” movies. When Ghostface begins slashing again, the kids appeal to an earlier Woodsboro generation (Arquette, Cox, Campbell) for help.

It’s a basic format that’s been trotted out for plenty of reboots before. But aside from its frequent stabs at self-referential comedy, …read more

‘Sister Wives’: Were Robyn and Kody Brown Intimate Before Marriage?

Pet of the Week: Big Boy

The Peninsula Humane Society & SPCA’s Pet of the Week is Big Boy. This Tabbylicious feline is an extra-large hunk of burning love. Big Boy is a four-year-old neutered male Brown Tabby with snow white paws and a matching white ascot. He’s suave and flirty for sure, but not in that Carly Simon “You’re so […]

Christmas came early for Disney+ subscribers. Fans learned that Tim Allen would return as Scott Calvin for a The Santa Clause limited series. However, Disney only shared the announcement on the Disney+ Instagram account for a few hours before the post was deleted.  Tim Allen will reprise his role as Scott Calvin from ‘The Santa […]