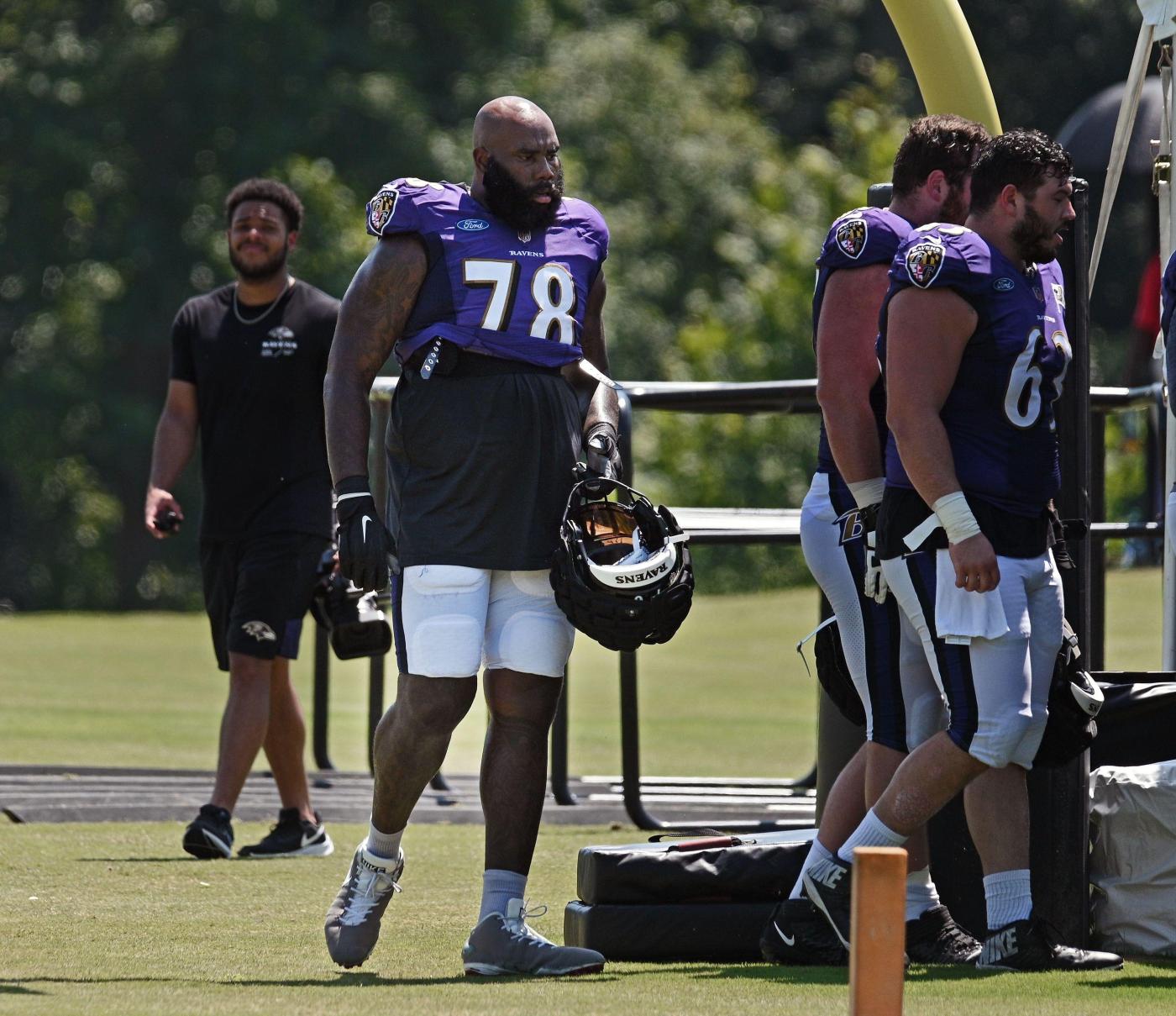 On Thursday afternoon, the Ravens once again faced another hot and gruesome practice. Even though the temperature sat at 93 degrees, the humidity made it feel as if the team’s practice facility was placed two inches from the sun.

To combat the dreadful heat, which appeared to get worse by the minute, the Ravens introduced a cooling period at the 90-minute mark of practice. After the horn sounded, the players marched inside the facility, where they received water and cold towels while coach John Harbaugh remained outside to answer questions from fans.

Harbaugh said the cooling period was introduced by chief medical officer Andrew Tucker as a way to simulate halftime while lowering the players’ body temperatures.

“The players weren’t so thrilled about that,” Harbaugh said. “They wanted to get going, but I think it was the smart thing to do.”

Harbaugh mentioned the Ravens won’t have cooling periods daily, only when the heat is unbearable.

Right tackle Morgan Moses, who is used to the heat training in Florida, said the cooling period was a good idea as it helps prepare the team to come out of halftime with a fast start.

“Obviously, when it’s hot like that during the games, we’ve got the cool benches out there and things like that, so why not work at it now — coming out of that halftime and starting fast?” Moses said. “And those are the things that we talk about, because there are four phases of the game. In the first quarter, you’ve got to start fast every time. If we start with a 5-yard run or a 5-yard pass, we’re getting the drive started, and those are the things that we’re working on.”

Even though quarterback Lamar Jackson had the play of the afternoon when he threw a 65-yard touchdown pass to receiver James Proche II, who got behind safety Chuck Clark, rookie tight end Isaiah Likely was the star Thursday afternoon.

The former Coastal Carolina standout had three touchdowns in the red zone during the 7-on-7 and 11-on-11 periods. Jackson lofted a pass to the back of the end zone, where Likely leaped up and corralled the ball over safety Geno Stone.

One play later, Likely made a juggling snag over rookie linebacker Diego Fagot while staying inbounds.

“He was really winded, but he still came up and made the play,” Harbaugh said. “That was impressive.”

Likely has turned heads during training camp, as Jackson called him a baby version of tight end Mark Andrews.

“Isaiah is like a receiver, but in a tight end’s body,” Jackson said last week. “I don’t want to give him too much credit, but he’s like that, for sure, right now.”

Andrews has even seen himself in Likely, who totaled 2,050 yards and 27 touchdowns in four seasons at Coastal Carolina. “He’s got a natural, kind of knack-feel for the game,” Andrews said. “I think that he sees the game really well. He’s really fluid. When he sees something open, he takes it.”

Outside linebacker Odafe Oweh was one …read more

By TIM REYNOLDS | AP Basketball Writer The NBA will be off on Election Day. The league’s schedule for the coming season will have all 30 teams playing on Nov. 7, the night before the midterm elections. The NBA is hoping teams use that night as an opportunity to encourage fans to get out and […]

Undrafted wide receiver Shemar Bridges generated some buzz Thursday night with his outstanding performance against the Tennessee Titans in the preseason opener, but it’s just part of his long journey to the NFL. The 6-foot-4, 207-pound rookie out of Division II Fort Valley State finished with four catches for 62 yards, including a leaping 38-yard […]

Garrett Wilson and the New York Jets top receivers have gotten used to receiving passes from Zach Wilson the last three weeks of training camp. With Zach Wilson out at least 2-4 weeks with a bone bruise and a meniscus tear in his right knee, Joe Flacco has been running the first-team offense in practice […]