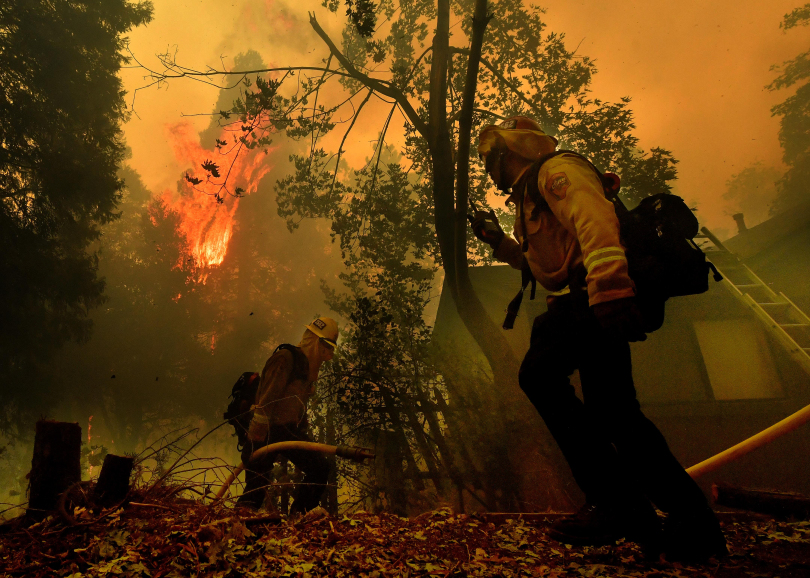 A new analysis concludes that fierce winds and power line failures are to blame for all of Southern California’s most deadly and destructive fires, a finding with implications for high-risk Northern California, as well.

Future fire losses can be reduced by better maintenance of utility lines and improved planning of where people build and live, according to the study, published in Wednesday’s issue of the journal Science Advances.

“We need to recognize that fire is a people problem,” said fire ecologist Jon E. Keeley of the U.S. Geological Survey’s Western Ecological Research Center, who led the study.

Much recent attention has been given to the role of hot weather and dense forests with dry twigs and logs. While important, those factors are only linked to California’s summer fires, typically ignited by lightning in remote areas where people don’t live, the study found.

For example, the fuel-driven 2013 Rim Fire on the Stanislaus Forest and adjacent Yosemite National Park, the 2012 Rush Fire in rural northeastern California and the 2015 Rough Fire in the Sierra Nevada Range – ignited in the months of July and August — were all started by lightning, yet caused no fatalities.

In contrast, autumn and winter fires are typically wind-driven and ignited by power lines near communities. The two biggest Southern California fires of the last decade — the Thomas Fire and the Woolsey Fire – were both started by power line failures.

These wind-driven fires have increased in frequency in recent decades, along with the expansion of the state’s power grid to serve a growing population in fire-prone areas.

“This is a welcome advance in our understanding of the conditions during Santa Ana wind events in areas of Southern California,” said Noah Diffenbaugh, professor at Stanford’s School of Earth, Energy & Environmental Sciences.

To understand the factors that determine land area burned, Keeley and colleagues from the Scripps Institution of Oceanography in San Diego and UC San Diego, among others, analyzed 71 years’ worth of daily windspeed data, from 1948 to 2018, as well as daily and monthly temperature and precipitation measurements covering the same time span.

The team focused on Santa Ana winds, the strong and very dry downslope winds that originate in the Great Basin and blow into coastal southern California.

Two of northern California’s most devastating fires — the 2017 Tubbs Fire in Napa, Sonoma and Lake counties and the 2018 Camp Fire in Paradise – were wind-driven. One ignited in October; the other, in November. Those two blazes, alone, killed 108 people. The October 1991 Oakland hills fire that killed 25 people and destroyed more than 3,200 homes was whipped into an inferno by Diablo winds.

“It’s the same thing,” he said. “If you look at the causes of those fires, all of them were started by people, and it’s largely because when you get …read more

DEAR JOAN: We have a white peahen in our neighborhood who walks down our streets. I don’t know if it was a pet or not. I don’t know if it’s a natural white color or an albino. Is it a good idea to leave out appropriate food for this bird? The peahen occasionally hangs out […]

Oakland laid out its terms for an A’s waterfront ballpark plan, so what happens now?

OAKLAND — Five days after the City Council voted to resume negotiating with the Oakland A’s over each party’s financial obligations in producing a $12 billion waterfront ballpark and village at Howard Terminal, team officials have not yet indicated whether they intend to participate. It’s a big decision, but not the only thing that needs […]

By HEATHER HOLLINGSWORTH and JOSH FUNK The COVID-19 curve in the U.S. is rising again after months of decline, with the number of new cases per day doubling over the past three weeks, driven by the fast-spreading delta variant, lagging vaccination rates and Fourth of July gatherings. Confirmed infections climbed to an average of about […]