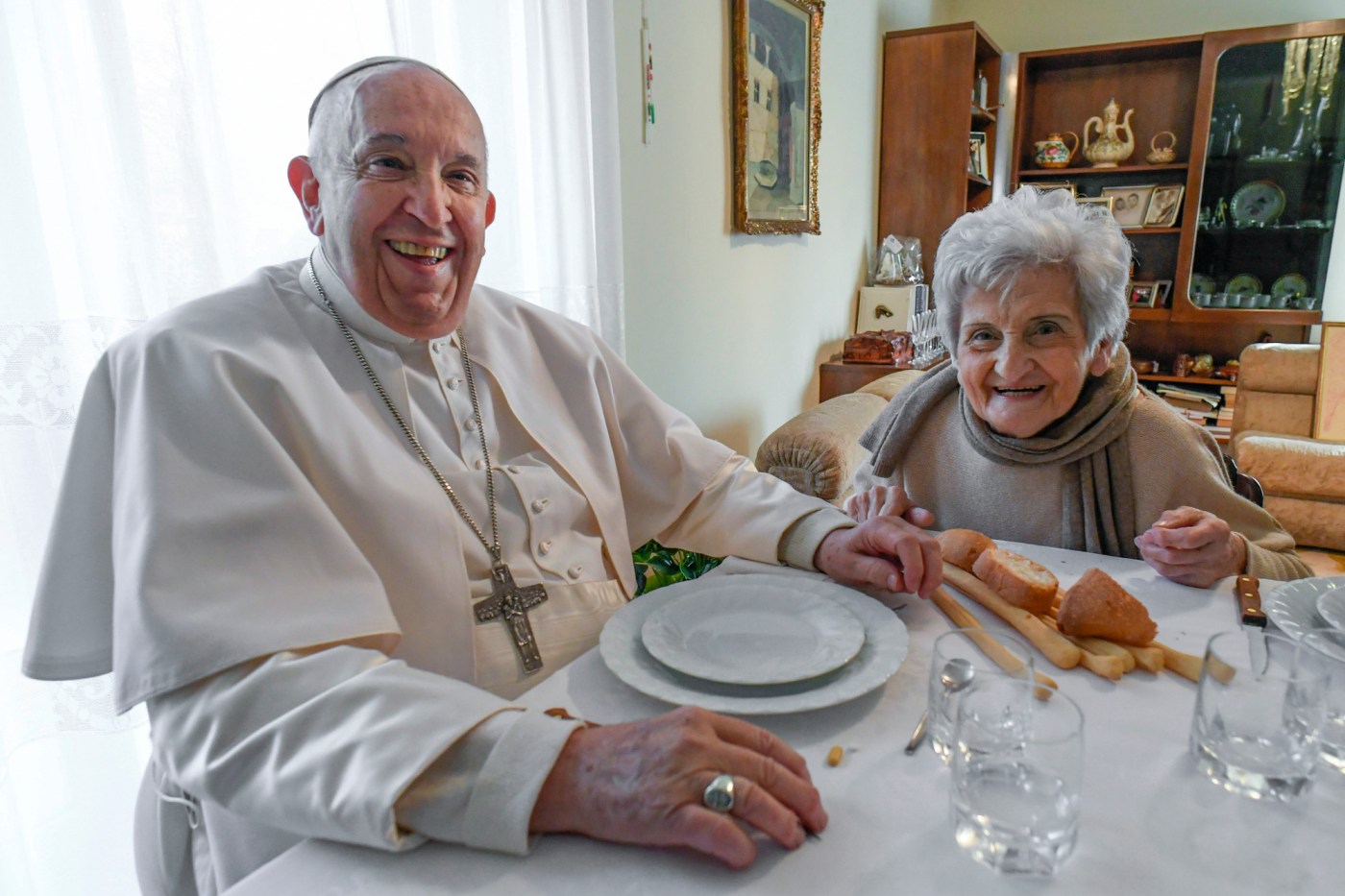 PORTACOMARO, Italy — Pope Francis made a rare personal getaway Saturday, returning to his father’s birthplace in northern Italy for the first time since ascending the papacy to celebrate the 90th birthday of a second cousin who long knew him as simply “Giorgio.”

Francis’ two-day visit to his ancestral homeland underscored some of the keystones of his papacy, including the importance of honoring the elderly and the human toll of migration. The private visit Saturday will be followed by public one Sunday to celebrate Mass for the local faithful, where Francis could well reflect on his family’s experience migrating to Argentina.

The pope’s father, Mario Jose Francisco Bergoglio, and his paternal grandparents arrived in Buenos Aires on Jan. 25, 1929 to reach other relatives who had joined the tail end of a mass decades-long emigration from Italy that the pope has honored with two recent saints: St. Giovanni Batista Scalabrini and St. Artedime Zatti.

The future pope, Jorge Mario Bergoglio, was born nearly eight years later in Buenos Aires, after the elder Bergoglio met and married Regina Maria Sivori, whose family was also of Italian immigrant stock. Francis grew up speaking the Piedmont dialect of his paternal grandmother Rosa, who cared for him most days.

The elder Bergoglio was born in the town of Portacomaro, 10 kilometers (6 miles) east of Asti, an agricultural town that lost population not only to emigration abroad but also to nearby Turin as it became an industrial center.

The pope’s family emigrated after the peak, which saw 14 million Italians leave from 1876 to 1915 — a movement that made Italy the biggest voluntary diaspora in the world, according to Lauren Braun-Strumfels, an associate professor of history at Cedar Crest College in Allentown, Pennsylvania.

Often citing his own family story, Francis, now 85, has made the welcoming and integration of migrants a hallmark of his papacy, often facing criticism as Europe in general, and Italy in particular, are consumed with the debate over how to manage 21st century mass migration.

The pope has recognized the historic significance of the emigrant experience with the recent canonizations of St. Giovanni Battista Scalabrini, an Italian bishop who founded an order to help Italian emigrants at the end of the 19th century, and Artemide Zatti, an Italian who emigrated to Argentina in the same period and dedicated his work to helping the sick.

He used the occasion to again denounce Europe’s indifference toward migrants risking their lives to cross the Mediterranean Sea and what they hope will be better futures.

Francis began his visit to Portacomaro on Saturday with lunch at the home of a cousin, Carla Rabezzana. Photographs released by the Vatican showed Francis clearly enjoying himself, hugging Rabezzana and sitting at the head of the table. He later visited another cousin nearby, stopping at a nursing home along the way to greet and bless …read more

If you’re looking to impress in the kitchen this holiday season, our favorite celebrity chefs are here to help. From preparing Ina Garten’s perfect Thanksgiving spread to whipping up a delicious casserole for Christmas morning thanks to Trisha Yearwood, there’s no shortage of tips to make the holidays a tasty affair.  If becoming the de […]