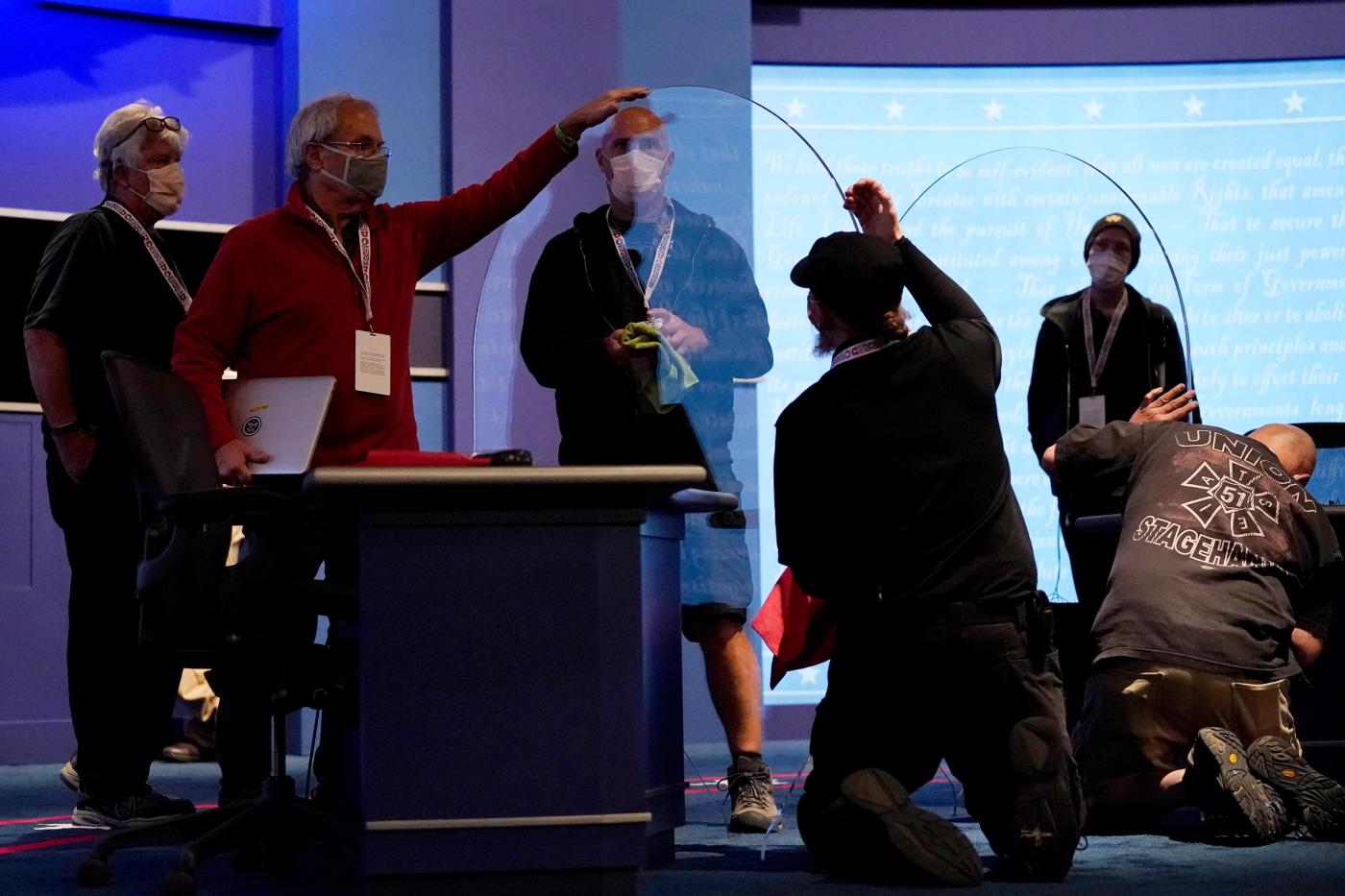 “The American people have witnessed what is the greatest failure of any presidential administration in the history of our country,” Harris charged as Pence, who leads the president’s coronavirus task force, shook his head.

Pence acknowledged that, “Our nation’s gone through a very challenging time this year.”

“I want the American people to know, from the very first day, President Trump has put the health of America first,” Pence said, promising millions of doses of a yet-to-be-announced treatment before the end of the year.

The candidates debated in an auditorium where any guest who refused to wear a face mask was to be asked to leave, an extraordinary backdrop for the only vice presidential debate of 2020.

Ultimately, the prime-time meeting was a chance for voters to decide whether Pence or Harris, a U.S. senator from California, is ready to assume the duties of the presidency before the end of the next term. It’s hardly a theoretical question: President Donald Trump, 74, is recovering from the coronavirus, and 77-year-old Joe Biden has not been infected but would be the oldest president ever.

For those reasons and more, the debate at the University of Utah in Salt Lake City shaped up as the most meaningful vice presidential debate in recent memory. It came at a precarious moment for the Republicans in particular, with growing concern that Trump’s position is weakening as more than a dozen senior officials across the White House, the Pentagon and inside his campaign are infected with the virus or in quarantine.

Trailing in polls, Trump and Pence have no time to lose; Election Day is less than four weeks away, and millions of Americans are already casting ballots.

Before Harris said a word, she made history by becoming the first Black woman to stand on a vice presidential debate stage. The night offered her a prime opportunity to energize would-be voters who have shown only modest excitement about Biden, a lifelong politician with a mixed record on race and criminal justice, particularly in his early years in the Senate.

Harris, 55, is the daughter of a Jamaican father and an Indian mother. She is also a former prosecutor whose pointed questioning of Trump’s appointees and court nominees helped make her a Democratic star.

Pence is a 61-year-old former Indiana governor and ex-radio host, an evangelical Christian known for his folksy charm and unwavering loyalty to Trump. And while he is Trump’s biggest public defender, the vice president does not share the president’s brash tone or undisciplined style.

Just eight days ago, Trump set the tone for the opening presidential debate, which was perhaps the ugliest in modern history. Wednesday’s affair was far more respectful.

While the debate covered a range of topics, the virus …read more

Sweeping panoramic views of San Francisco’s skyline encompass postcard-worthy snapshots of some of the city’s most iconic landmarks, from Coit Tower to the Transamerica Pyramid with the splendor of the Bay Bridge suspended over the azure waters of the bay. This is your next home: A sophisticated and rare gem that brilliantly shines in the […]

A deadly inferno drove thousands from their Santa Cruz Mountains homes — why would anyone move back?

Jenny Wu lost a lifetime of memories when her Boulder Creek house burned to the ground in the August inferno that torched a huge expanse of Santa Cruz and San Mateo counties. Jewelry and jade from her parents, family photos and other artifacts of her heritage were all consumed by fire. But she plans to […]

Los Gatos community briefs for the week of Oct. 23

Celebrating a centennial Celebrating a 100th birthday during the COVID-19 pandemic is a challenge, but friends and fans of Georgia Nelson did all they could to make it a special occasion. Twenty members of the Pi Beta Phi alum club gathered outside her Los Gatos home recently with balloons, a banner, flowers, cards and a […]