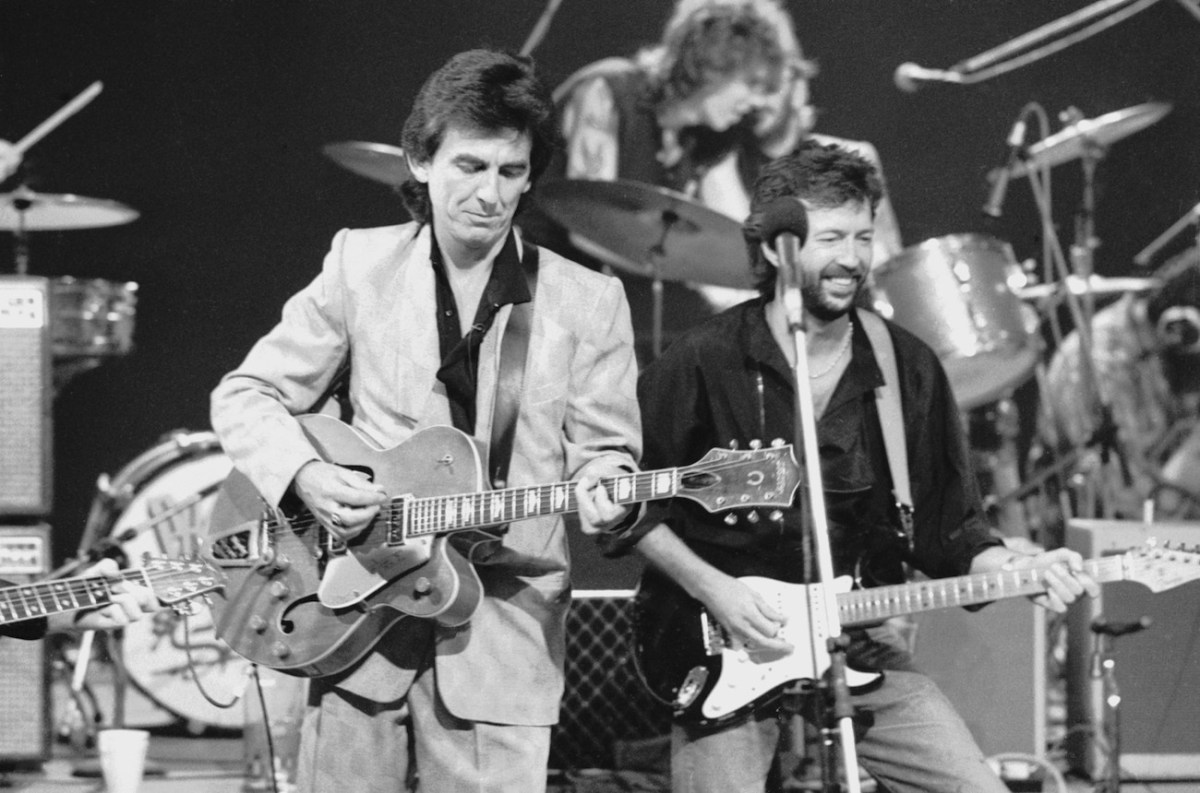 Pattie Boyd married two famous rock stars, George Harrison and Eric Clapton. They were both completely different people, of course. However, they were similar in how they showed Boyd their feelings. George and Clapton could only express themselves through song.

Pattie Boyd was married to George Harrison and Eric Clapton

Boyd met George on the set of The Beatles’ A Hard Day’s Night. From the start, George didn’t know how to express his feelings toward the beautiful actor and model.

In Here Comes The Sun: The Spiritual And Musical Journey Of George Harrison, Joshua M. Greene wrote, “She asked George for his autograph, and at a loss for any other way to communicate his feelings, he marked little hearts under his name.”

George asked Boyd to marry him the first day they met. She was dating someone, so she declined. However, she later broke up with her boyfriend and told George the next day. They went to dinner that night.

George wrote numerous songs for Boyd, including “If I Needed Someone” and one of his best love songs ever, “Something.” They married in 1966. However, once George became spiritual, he began to leave Boyd in the dust. She felt alone, and the couple’s marriage started to crumble for other reasons.

Around that time, Clapton fell in love with Boyd. He wrote “Layla” to express his love for her. Instead of talking things through, though, George and Clapton engaged in a guitar battle to win Boyd. Even during a critical time in their lives, they couldn’t express their feelings except through music. Clapton won.

George and Boyd officially divorced in 1977, and Boyd married Clapton in 1979.

RELATED: George Harrison’s ‘Here Comes The Sun’ Came About After He Played Hooky

In the late 1960s and early 1970s, Boyd found herself the muse of two of the most famous rock stars. In an interview for Harper’s Bazaar, Taylor Swift asked Boyd, “Does the concept of being called a muse feel like a correct fit?”

“I find the concept of being a muse understandable when you think of all the great painters, poets, and photographers who usually have had one or two,” George said. “The artist absorbs an element from their muse that has nothing to do with words, just the purity of their essence.”

“Swift asked, “What do you feel might be a factor that artists want to communicate with you through song?”

Boyd replied, “I think in my case both George and Eric had an inability to communicate their feelings through normal conversation. I became a reflection for them.”

How the musicians differed

Boyd said George and Clapton were similar in terms of expressing their feelings. However, it was also evident that they were completely different in a relationship.

As California ramps up pressure on local governments to increase housing production, two state laws are being employed by warring factions. Down in the trenches of California’s seemingly perpetual clashes over housing, warring factions are employing two decades-old state laws as weapons. One is the famous — or infamous — California Environmental Quality Act (CEQA), signed by […]

Chicago Cubs are set to play the St. Louis Cardinals in London next season

The Chicago Cubs are finally heading to London. They were initially scheduled to play the St. Louis Cardinals in London during the 2020 season before the pandemic canceled the series. Major League Baseball announced Thursday the Cubs and Cardinals will play in the London Series next season at London Stadium on June 24-25. “The MLB […]

HOUSTON — Lance McCullers Jr. pitched six shutout innings in his season debut to help the Houston Astros send the A’s to their seventh straight loss Saturday night. Alex Bregman homered and Trey Mancini had three hits to put Houston in position to sweep its three-game against the A’s — two weeks after Oakland swept […]