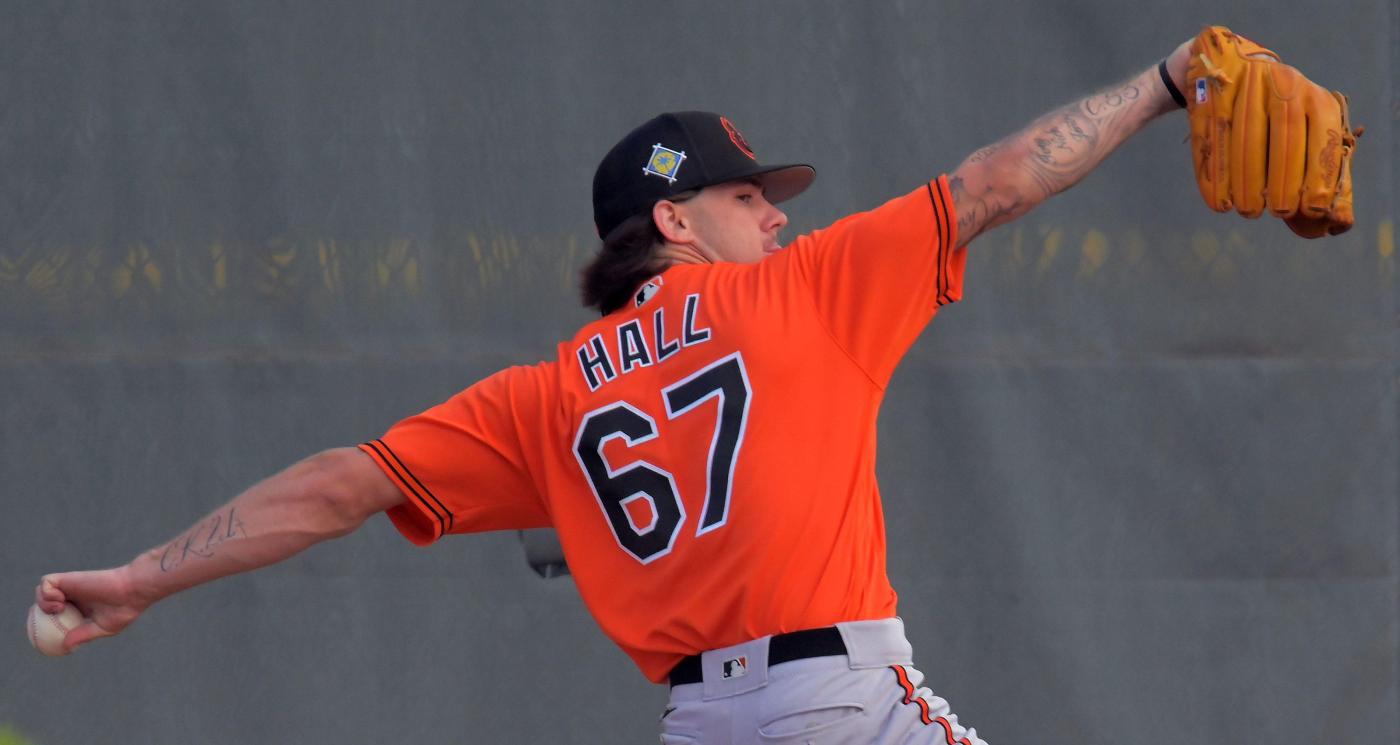 When DL Hall made his 2022 spring training debut, a one-inning cameo that marked his return from injury, it was the radar gun that attracted most of the attention. The left-hander took the mound for the first time in a game since his midseason shutdown the year prior and pumped triple digits with his fastball.

That’s always been the eye-catching portion of Hall’s repertoire on the mound, and perhaps it’s that high velocity that encourages some bystanders to ponder a future coming out of the bullpen at the major league level rather than as a starting pitcher.

But focusing on that high-speed fastball — while enticing — misses the full picture of Hall, the 23-year-old who ranks as the No. 3 prospect in the Orioles’ organization, according to Baseball America.

“I’m not just a 100-mph fastball guy,” Hall said. “I can also throw other stuff. That’s something I’m gonna continue to prove — and improve — and continue to try to command all four of them.”

It’s his changeup, the one he worked to master at the alternate training site in 2020. It’s his slider, the sweeping movement that draws ample whiffs. It’s his curveball, which he’s still tinkering with to perfect it as a differentiator with a 12 o’clock to 6 o’clock break.

Those pitches are why Hall believes he can break into the Orioles’ rotation, a four-pitch arsenal that can be placed for strikes, setting him apart from other hard-throwing pitchers with his variability.

“To get that true breaking ball and to have that changeup, I think both of those have made huge jumps for me,” Hall said, “and I think that’s a lot of the reason I’ve found some success.”

On Tuesday, Hall made his debut at the Triple-A level for the Norfolk Tides. His outing — one run allowed on 53 pitches in three innings — wasn’t what he hoped for. He had hoped to go deeper into the game, continuing a buildup since his return from the stress reaction in his left elbow that ended his 2021 season.

But the organization opted to play it safe with Hall. He had traveled extensively the day before, part of a rapid rise to Triple-A. He made his first start with High-A Aberdeen in late April. The next week, he started for Double-A Bowie. And then five days later — with a trip to Nashville in the mix to join the Tides — he took the mound Tuesday at Harbor Park in Norfolk.

His body didn’t feel great. He had flown back from Nashville to Washington, D.C., then picked up his car and drove four hours south. But he didn’t mind the whirlwind because it resulted in a step in the right direction.

“It’s been crazy, but it’s all been fun,” Hall said. “Any step you’re taking closer to Baltimore is a good thing.”

Hall spent much of the previous two seasons developing his changeup, beginning at the 2020 alternate site when the coronavirus pandemic canceled the minor league season. …read more

Theo James | Gregg DeGuire/WireImage Theo James did a lot of physical training for the ‘Divergent’ movies Fans of Divergent will recall that when we first meet Four he is a member of the Dauntless faction. As the Dauntless are authorized to protect the city, they are known for their strength and fearlessness. Since Four […]

After more than two years of planning, construction and anticipation, Eataly has announced an opening date for its Silicon Valley food and wine emporium. This Italian food extravaganza, with pasta, cheeses, sauces, gelato, wine, espresso all under one roof, will throw open the doors a month from today — 5 p.m. Thursday, June 16 — […]

‘Cobra Kai’: What Else Has Mary Mouser Been In?