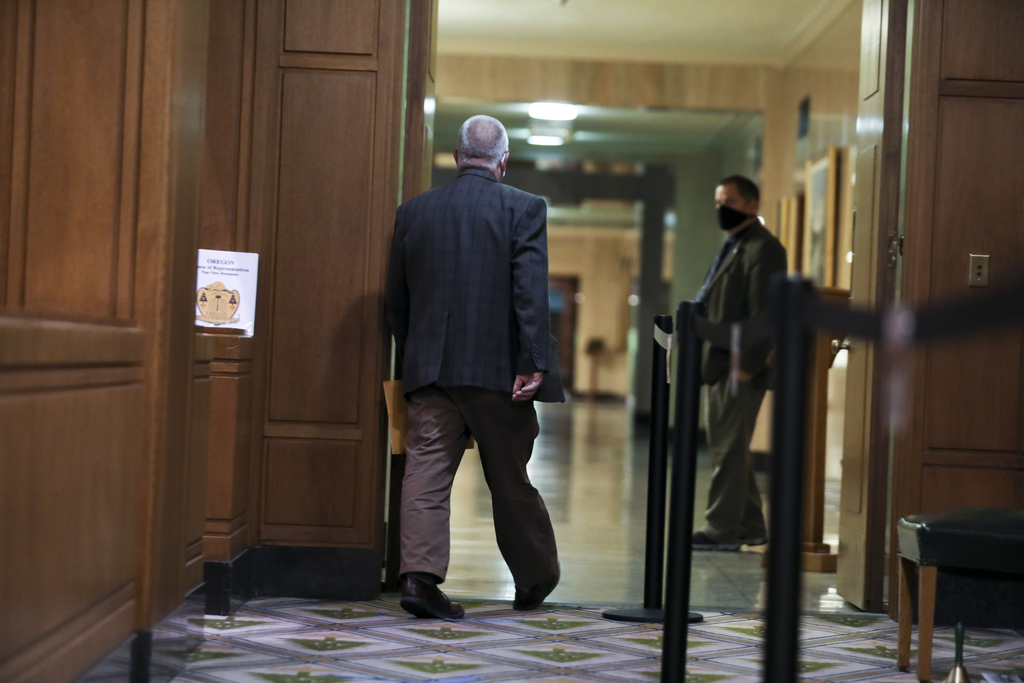 WASHINGTON – The Oregon House of Representatives on Thursday night voted to expel one of its own members accused of coordinating with protesters to allow them into the state Capitol.

Security footage cited by lawmakers showed Mike Nearman, a Republican, opening a locked side door to the Capitol while the House was in session on Dec. 21 and allowing in a group of protesters, some of whom were armed. The intruders damaged property and clashed with law enforcement while calling for the arrest of Oregon’s governor over her imposition of pandemic restrictions.

A video posted online five days before the breach showed Nearman advising protesters to text him when they were outside the Capitol in order to gain access to the building, according to the Oregon House resolution to remove Nearman. The lawmakers said Nearman had engaged in “disorderly behavior” by helping the protesters enter the building in defiance of COVID-19 safety protocols.

Nearman made a brief statement during the House debate on Thursday, saying the effort to expel him lacked due process and criticizing the legislature for an attitude he characterized as “might makes right,” according to local reports.

The riot was part of a wave of far-right protests against state COVID-19 restrictions that swept the United States last year, picking up steam after former President Donald Trump baselessly claimed voter fraud underlay his loss to President Joe Biden in November.

Oregon House Speaker Tina Kotek, a Democrat who sponsored the resolution to remove Nearman, said in a statement posted on Twitter on Thursday that the House vote to remove one of its own members was “unprecedented” but “the only reasonable path forward.”

Chicago PD officer charged in Jan. 6 attack on the Capitol

Nearman’s actions were “blatant and deliberate, and he has shown no remorse for jeopardizing the safety of every person in the Capitol that day,” she said in the statement.

The only Oregon lawmaker to vote against Kotek’s resolution was Nearman himself, who is also being prosecuted on misdemeanor charges for allowing the rioters into the Capitol in December.

By Sarah N. Lynch | Reuters WASHINGTON – The Justice Department on Monday said it recovered some $2.3 million worth of cryptocurrency ransomware paid by Colonial Pipeline Co, in a crackdown on hackers who launched the most disruptive U.S. cyberattack on record. Deputy Attorney General Lisa Monaco said investigators had seized 63.7 Bitcoins, now valued […]

A federal judge on Tuesday dismissed with prejudice a lawsuit filed by California Republicans that echoed false allegations made by former President Donald Trump about the validity of the 2020 election. The lawsuit, filed in January by a conservative election watchdog group and 10 failed GOP congressional candidates against a slew of state and county […]

Submit your letter to the editor via this form. Read more Letters to the Editor. Expand reward for fireworks informants A June 9 article in your paper said, “Officials in Richmond are getting so tired of illegal fireworks use that they’re ready to pay to put a stop to it: $2,500 for every report that […]