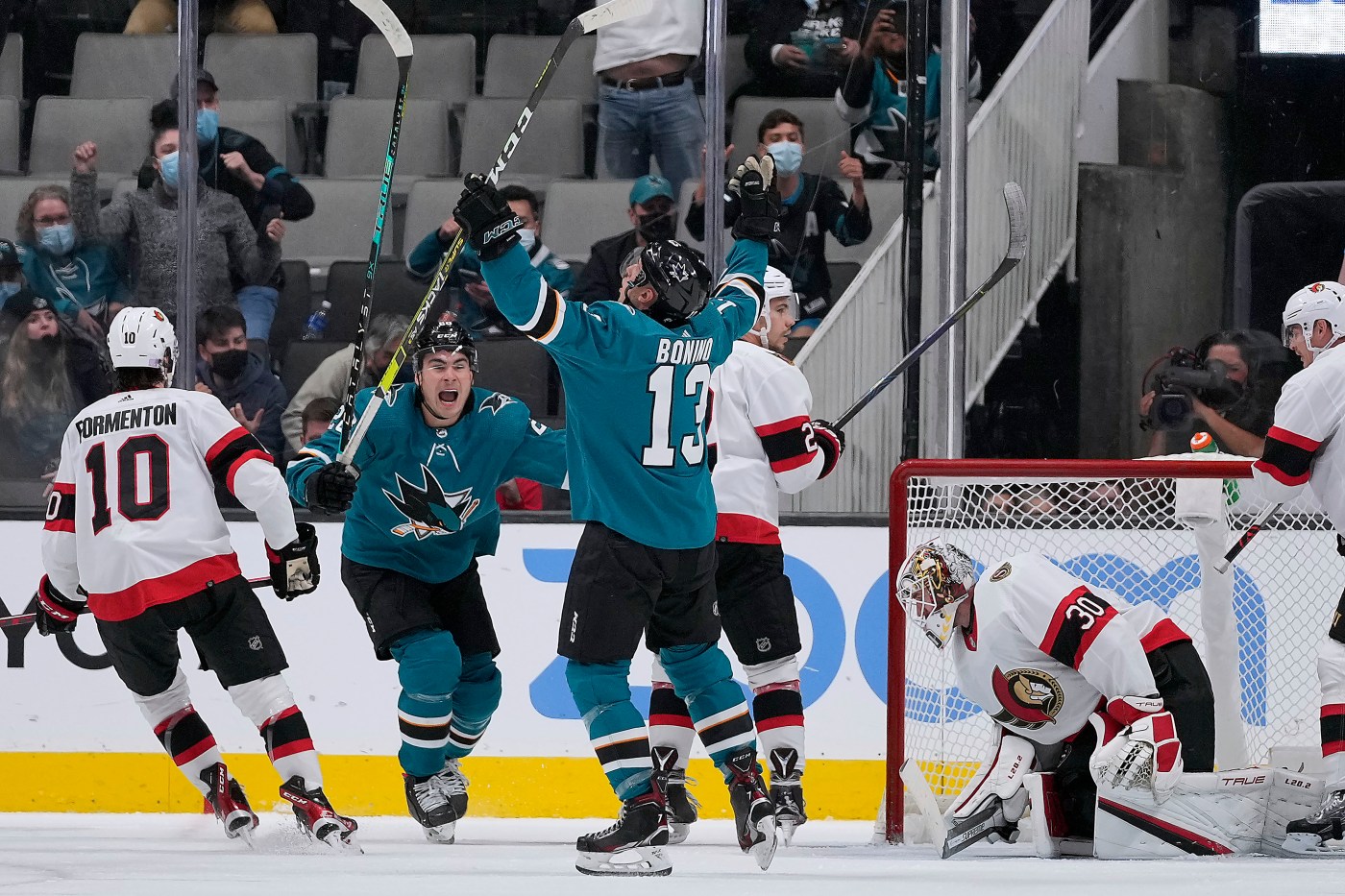 SAN JOSE – Judging by the reaction he saw on the Sharks’ bench, coach Bob Boughner said he thought Nick Bonino had scored a goal in the Stanley Cup Final.

With 31 seconds left in the second period of Wednesday’s game with Ottawa and the Sharks on the power play, Bonino, stationed in the slot, took a centering pass from Timo Meier and one-timed it on the Senators’ net. Ottawa goalie Matt Murray caught a piece of the puck, but the shot had enough velocity on it to tumble across the goal line.

Bonino raised his arms in the air and looked up at the rafters for a moment before he was immediately mobbed by his teammates. Finally, in his 19th game of the season, Bonino had his first point as a member of the Sharks.

“Guys were so excited for him,” Boughner said of Bonino. “You could see the relief on his face.”

The goal was the first of four straight by the Sharks, who beat the Senators 6-3 to improve to 2-1-0 on a four-game homestand that concludes Friday against the Toronto Maple Leafs.

“It was one of the happiest goal piles I’ve been in,” said Bonino, who was playing in his 700th career NHL game Wednesday. “The guys were pretty happy for me. I felt like I could exhale finally.”

Bonino experienced moments of frustration, almost to the point of exasperation, throughout the first six weeks of the season before Wednesday.

He had spent most of the season on one of the two power-play units and was on the top line with Logan Couture for a brief spell. He seemed to be putting himself in the right spots on the ice to hit the scoresheet a handful of times and had 27 shots on goal in his first 18 games.

None of the pucks he was shooting, or passing to other players, were finding the back of the net, and his points drought was the second-longest of his career after he went scoreless in 26 games with Anaheim in 2010-2011.

His teammates, though, knew Bonino was contributing in other ways. He’s one of the Sharks’ leading forwards on the penalty kill and in the faceoff circle. and he plays a responsible two-way game – all hallmarks of his 13-year NHL career so far that includes (actual) Stanley Cups with the Pittsburgh Penguins in 2016 and 2017.

When Bonino was struggling offensively, Boughner and others stressed to him the positive ways he was making an impact.

“That holds a lot of weight when someone with those credentials walks in your room.”

“He’s done so many good things for us,” Boughner said. “It was getting painful to watch because you could feel how frustrated he was, and he was still getting chances.

“But he was getting those chances. It …read more

Last month, U.S. Customs and Border Protection seized hundreds of Lagori 7 Stones toys, a popular game in which kids toss a ball at seven stacked, square stones to knock them down. A lab analysis found the toys were coated in lead, cadmium and barium — heavy metals that can impair the brain and nervous […]