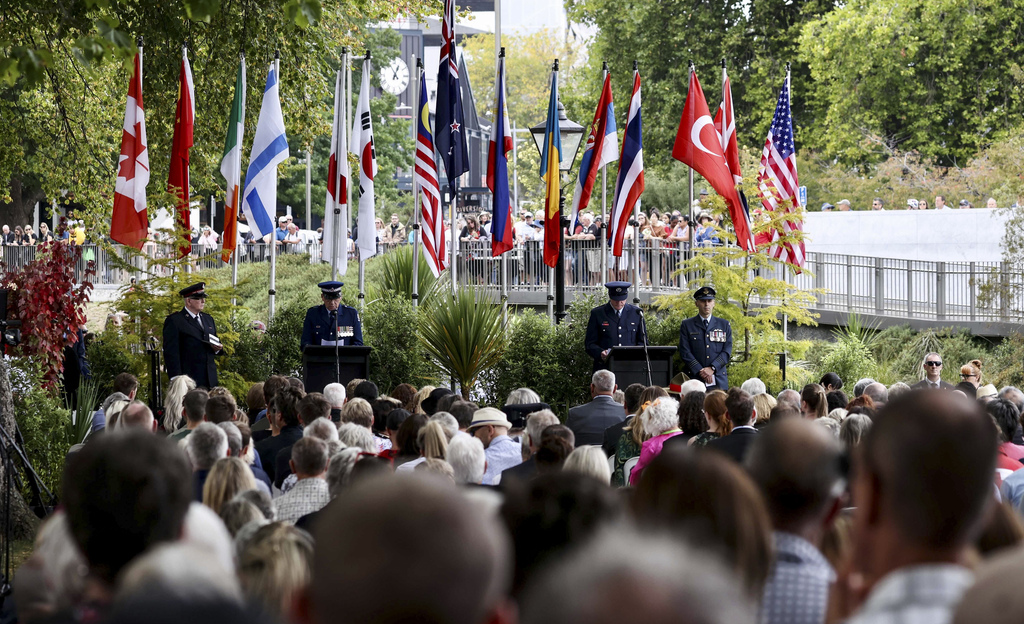 WELLINGTON, New Zealand — New Zealand lowered its flags on Monday and made special note of those who couldn’t travel as it marked the 10th anniversary of the Christchurch earthquake that killed 185 people.

Hundreds of people attended an outdoor service in Christchurch, which continues to rebuild from the magnitude 6.3 quake that destroyed much of its downtown. A separate service was also held in the northern Japanese city of Toyama, home to 12 students who died in the quake.

Speaking at the Christchurch ceremony, New Zealand Prime Minister Jacinda Ardern said it was important to remember that 87 of the victims were foreigners and many of their families couldn’t be there because of coronavirus travel restrictions.

“Our flags fly at half-mast for them today too,” she said.

Christchurch Mayor Lianne Dalziel talked about the 28 Japanese citizens who died, the largest number of victims from any country outside of New Zealand.

“I especially wanted to mention all the Japanese family members who I last year met in Japan and who so wanted to be here,” she said. “We are forever connected by this tragedy and we do not forget you even when we are apart. You are with us in spirit.”

Another person who spoke at the Christchurch service was Maan Alkaisi, a university professor who has spent years trying to get authorities to press criminal charges against those who designed the CTV building which collapsed during the quake, killing 115 people including his wife, Maysoon Abbas.

A review after the quake found the building’s design was flawed and it should never have been approved.

“Today commemorates 10 years of injustice and mistreatment,” Alkaisi said. “Today reminds us of our responsibility to make sure we learn from this tragic experience and honor those lovely people we lost by ensuring their dreams are kept alive, by ensuring this will not happen again.”

The memorial service was held on the banks of the Avon River, and people observed a moment’s silence at 12:51 p.m., the moment the quake struck in 2011. Emergency service workers and others took turns reading out the names of each of the victims.

In a touching moment, Dalziel read out a message from Bob Parker, who was the mayor at the time of the quake and became an internationally known face of the tragedy. Parker recently suffered a stroke and attended the service in a wheelchair.

Ardern said the quake had affected people in many ways, and daily reminders including aftershocks and the fractured landscape had made the recovery harder.

“Ten years on there will be people still living their daily lives with the long shadow of that day,” she said.

“But as we look ahead to the coming decade, I see hope and energy and optimism,” she said. “And I see Christchurch taking its rightful place amongst New Zealand’s best and brightest cities.”

In Toyama, more than 100 family members, friends and school officials observed a moment of silence for the student victims and offered flowers during a ceremony at the Toyama College of Foreign …read more

Miss Manners: Is it legal for a man to use his wife’s name?

By David Rising | Associated Press BERLIN — Germany’s domestic intelligence agency has put the Alternative for Germany party under observation due to suspicions of extreme-right sympathies, German media reported Wednesday, a move against the biggest opposition party in parliament that comes only six months before a national election. Alternative for Germany, or AfD, has […]

Written by Rebecca Jepsen for the BANG News Group To say that 2020 was an unprecedented year seems like such an understatement! When I wrote my last update in July 2020 I was hopeful we were going to round the COVID-19 corner quickly and get back to some semblance of normalcy — but that certainly […]