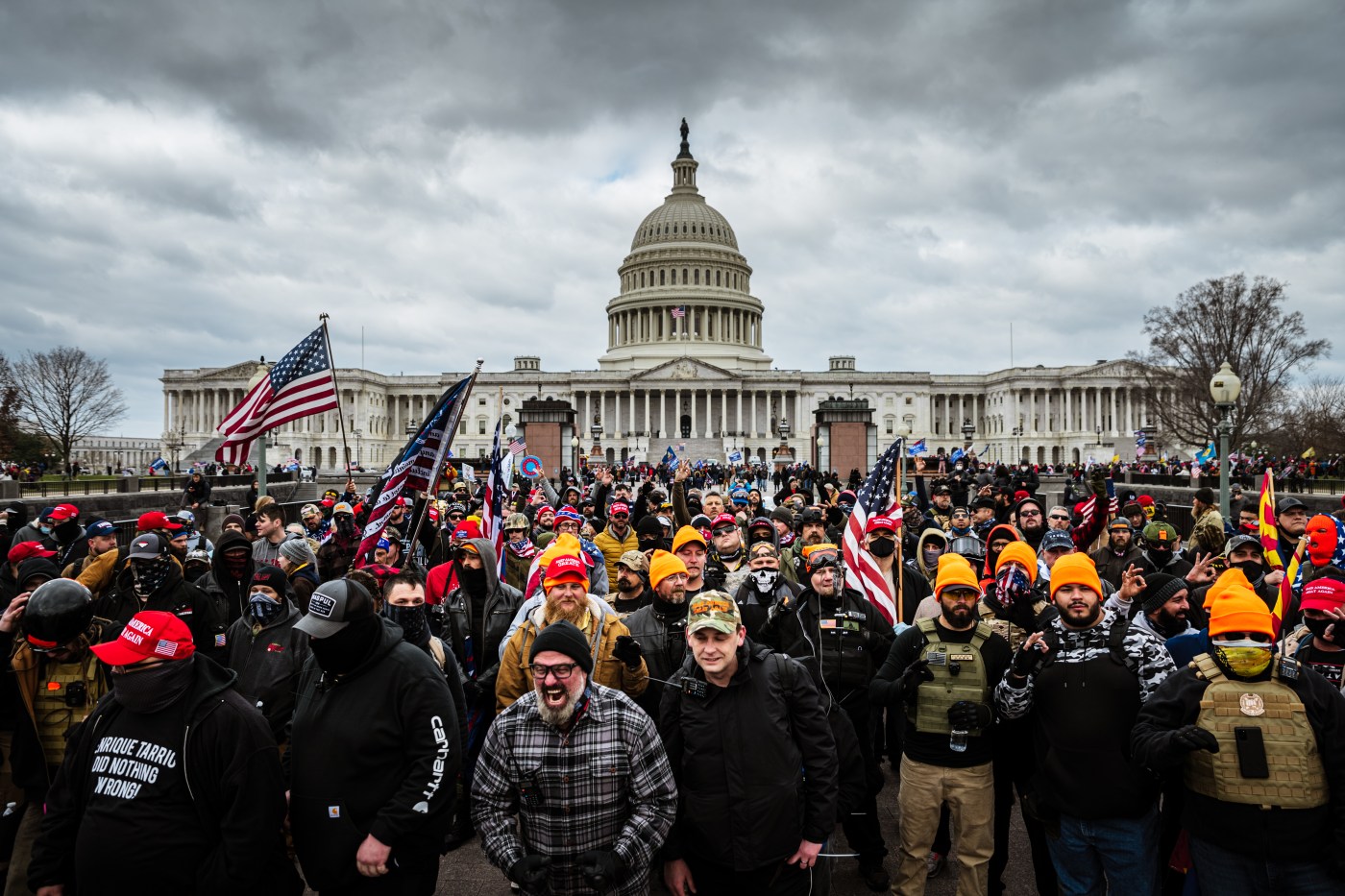 MENLO PARK — A candy store in Menlo Park is tanking in online ratings this week after a photo started circulating online of the store’s owner attending Wednesday’s pro-Trump rally in Washington D.C., which escalated into a violent mob storming the U.S. Capitol building.

Suzi Tinsley, the owner of Sugar Shack in Menlo Park, is seen posing in the photo outdoors in a crowd of people at the rally wearing what appears to be a Trump flag around her back like a cape, a red Trump hat, and a t-shirt that says “Make America Great Again.”

Tinsley is not wearing a mask in the photo.

A former customer and local activist, Henry Shane, 18, of Menlo Park, said Friday in an interview that people should boycott Tinsley’s store because she participated “in an anti-democracy protest to overturn a legal, fair election.”

Shane said he grew up going to Tinsley’s store, and tolerates all political views. But he said the rally on Wednesday was not about a political viewpoint, it was about facsim and rejecting election results that had been upheld against legal challenges around the country.

Tinsley did not immediately return requests for comment from this news organization Friday.

In written statements issued to ABC 7 News and NBC Bay Area, Tinsley said she did not participate in the violence, and claims she only attended the rally because it was going to be Trump’s last public appearance as president, and didn’t post to social media about it.

“I was there for a peaceful march and shared photos via text with a few friends. I left the rally when the crowd became unruly and I was pushed to the ground. I returned to my hotel at that point, long before the agitators stormed the building,” Tinsley said.

“Just like every other American, I watched in horror as the chaos unfolded on television. I couldn’t believe my eyes and remain appalled at what I saw,” she said.

“I love my community, I love my country, and I hope those responsible for storming our Capitol building are held fully accountable,” Tinsley said.

“It is actually not patriotic what she was doing,” he said.

“Anyone who took part in marching to the Capitol, even if you didn’t partake in the violence, you were participating in an anti-democracy action,” Shane said.

After photos of Tinsley leaked, and posts about her business made the rounds online, many people started leaving bad reviews about Sugar Shack on Yelp, calling the owner a “racist,” a “thug,”, and a “terrorist,” among other labels, and also encouraging others to boycott the business.

The posts caught the attention of Yelp, which has temporarily suspended commenting on the page for Sugar Shack, while it investigates whether the posts reflect “actual consumer experiences rather than the recent events,” the site said.

Others online and on the Peninsula are concerned about Tinsley not wearing a mask in the photo.

“I think a lot of people are more upset that she was in D.C. without a mask with thousands of different people, and then coming back to her …read more

SANTA CRUZ — A 28-year-old San Jose woman was killed Sunday night in a single-car crash not far from Highway 17 and the Glen Canyon area. The woman was riding as a passenger with a 30-year-old San Jose man in a 2013 Volkswagon Golf around 9:45 p.m. Sunday. The car, traveling southbound on El Rancho Drive […]

The Latest: Israeli PM gets second dose of COVID-19 shot

By The Associated Press JERUSALEM — Israeli Prime Minister Benjamin Netanyahu on Saturday received the second dose of the coronavirus vaccine after becoming the first Israeli to be inoculated last month. Israel is in the midst of a third nationwide lockdown after seeing a surge in cases despite unleashing one of the world’s fastest vaccination […]

Officer Chauvin will be tried separately from his colleagues

By Amy Forliti | Associated Press MINNEAPOLIS — A former Minneapolis police officer who held his knee to George Floyd’s neck for minutes will be tried separately from the three other former officers accused in his death, according to an order filed Tuesday that cites limited courtroom space due to COVID-19 restrictions. Derek Chauvin will […]