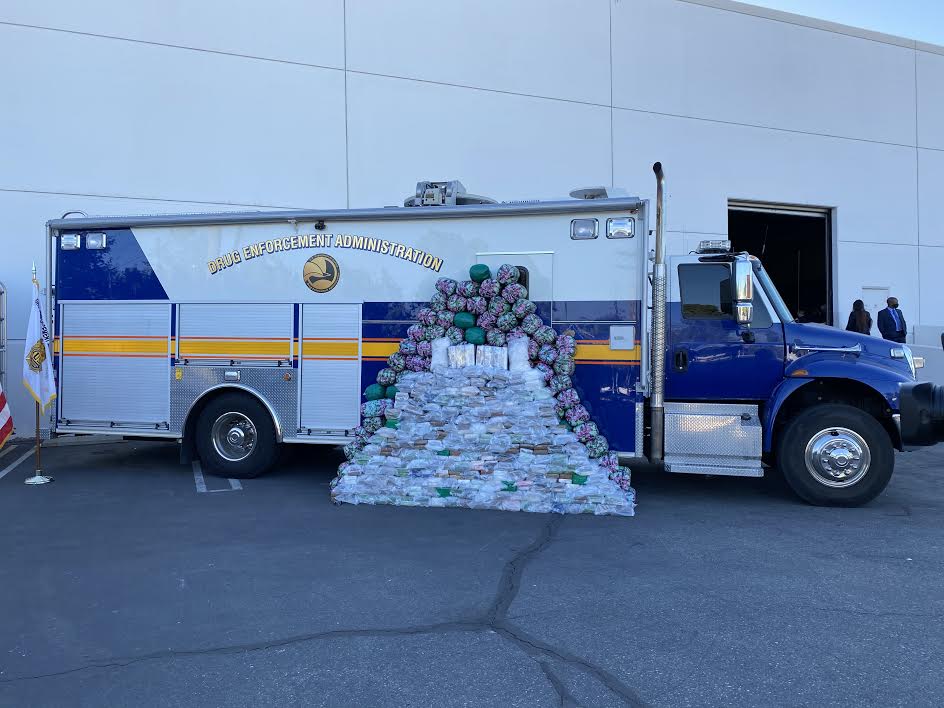 Piled 10 feet high and resting against a large truck, hundreds of packages containing methamphetamine, heroin and cocaine were put on display Wednesday, Oct. 14, as Drug Enforcement Administration officials announced a pair of their biggest busts ever.

Over two recent weeks, a pair of investigations led to the seizure of more than 5,200 pounds of methamphetamine, believed to be tied to the Sinaloa Cartel in Mexico, Timothy Shea, special agent in charge of the DEA’s Los Angeles office, said at a press conference in Montebello, home to an agency facility.

The first bust netted more than 2,200 pounds of methamphetamine, 893 pounds of cocaine and 13 pounds of heroin – found, authorities said, in a stash house in Perris and another in Moreno Valley on Oct. 2.

The drugs were on the floor of the two homes, in 25 duffel bags in all, ready for distribution, Shea said.

It was the DEA’s largest methamphetamine haul inside the United States.

The second bust occurred at the border, where officials confiscated more than 3,000 pounds of methamphetamine, 29 kilograms of heroin, 13 kilograms of fentanyl powder and 16 kilograms of counterfeit pills laced with fentanyl at the Otay Mesa port of entry south of downtown San Diego, Oct. 9, Shea said.

Officials said that was DEA’s second-largest find at the border.

Shea called the investigations a success in the DEA’s international effort to fight the growing problem of methamphetamine in the United States.

“These two seizures are more than enough to provide a dose of meth for every man, woman and child in the United States and Mexico,” the special agent said. “It’s a massive amount.

“These seizures are significant, not just because of the shear volume, but because it’s a sign of a deeply concerning trend,” Shea continued. “Meth is pouring into the United States through our southern border and is destroying too many communities and, more importantly, too many lives.”

California allows theme parks to reopen, but Disney and Universal won’t return for weeks or months

California has cleared theme parks to reopen after more than seven months of coronavirus closures provided they follow newly issued COVID-19 health and safety guidelines, but Disney, Universal and other large parks won’t be able to return for weeks or months. California Health and Human Services secretary Mark Ghaly announced during a news conference on […]

Ramón Laureano and Matt Olson were named Gold Glove Award finalists in Rawlings’ reveal over Twitter Thursday afternoon. While the two Oakland A’s could celebrate the acknowledgement, they couldn’t ignore a glaring omission; third baseman Matt Chapman was not named a finalist. “That is pretty weird,” Olson said. “I think we all know if he […]