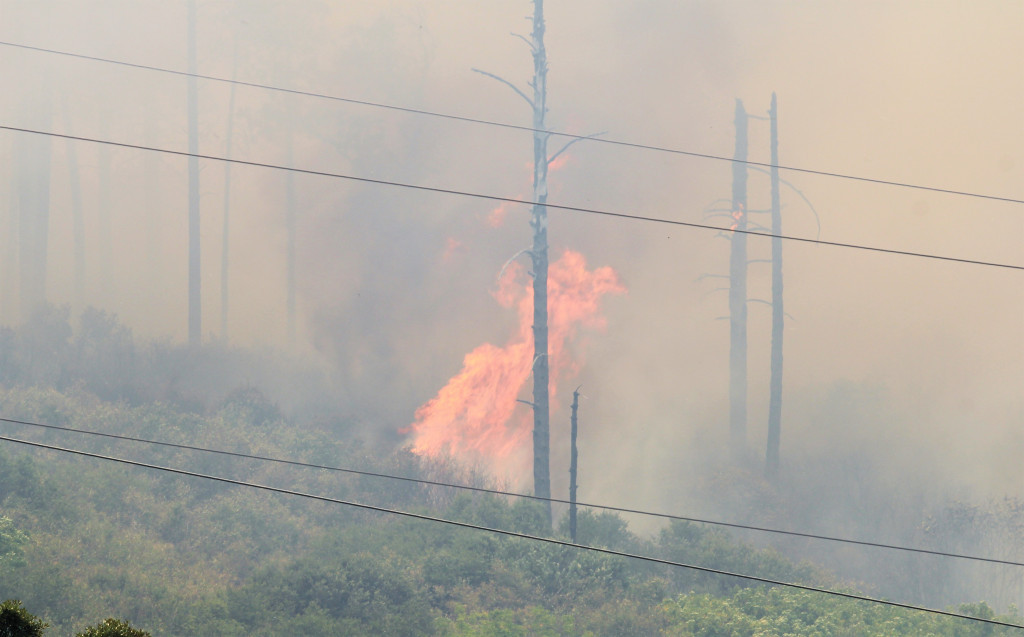 Marin firefighters are battling wildfires raging to the north, including the Dixie fire that ballooned to nearly 60,000 acres Tuesday.

“It looks extremely active,” Colman said of the Dixie fire. “The plumes of smoke, it’s impressive. It’s showing no signs of slowing down.”

Marin County fire Chief Jason Weber said 54 firefighters from Marin agencies were part of two additional strike teams on the line, one at the Dixie fire and another at the Beckwourth Complex fire that has scorched about 105,00 acres as of Tuesday.

Marin’s crews joined more than 5,400 firefighters fighting five wildfires that have consumed more than 233,000 acres across the state.

“With (the National Oceanic and Atmospheric Administration) predicting a La Nina this fall, we are concerned that fire season will again be extended beyond our traditional end,” Weber said.

“This is especially concerning as the fall is when we typically see east-wind events,” he said. “Winds coupled with historically dry fuels is a very concerning combination.”

On Monday, the unusual weather conditions caused the Dixie fire to generate its own overhead thunderstorm, with wild winds and “extreme, extreme” conditions accelerating its rate of spread, the National Weather Service said.

The “pyro cumulonimbus” cloud system formed as the effects of a southwestern monsoonal surge reached the fire area in Butte County. Fast-rising hot air from the fire’s tallest columns combined with monsoonal moisture to create ideal conditions for violent weather.

“It’s very crazy,” said Cory Mueller, a National Weather Service meteorologist with the Sacramento region. “You don’t want to see lightning strikes coming off of a fire — it’s obviously dangerous for anyone fighting the fire, but when you see it, it means you’re likely having very intense fire growth.”

The Dixie fire remained relatively stable for several days — burning northeast and away from the footprint of the 2018 Camp fire — before exploding over the weekend.

The blaze had grown Tuesday by nearly 20,000 acres overnight and was about 15% contained. Two structures have been destroyed, with more than 800 more threatened.

In a briefing, Cal Fire’s incident meteorologist Julia Ruthford said that the fire’s columns peaked at about 30,000 feet at the start of the week and climbed even higher Monday afternoon as the mid-level moisture gathered overhead.

“That led to some lightning out ahead of it and some really gusty, erratic winds due to that extreme, extreme conditions due to …read more

The Dixie Fire burning in Butte and Plumas counties is now California’s largest wildfire of the season, authorities said, and the fight to contain it is only expected to get more difficult in the coming days. As of 7 p.m. Thursday, the fire had scorched 113,006 acres and was 18 percent contained, according to the […]

By Melanie Zanona and Annie Grayer | CNN House Minority Leader Kevin McCarthy has made his selection of five Republicans to join the select committee investigating January 6, ensuring that Republicans will have input in the investigation run by Democrats. Republican Reps. Jim Banks of Indiana, Jim Jordan of Ohio, Rodney Davis of Illinois, Kelly […]

A Napa naturopathic doctor is the first person to be federally charged with a fake COVID-19 vaccination card and natural treatment scheme, accused of lying about the safety of the shots to peddle phony treatments for the disease with falsified inoculation cards, prosecutors said. Federal prosecutors said Juli A. Mazi, 41, a California-licensed naturopathic doctor, […]