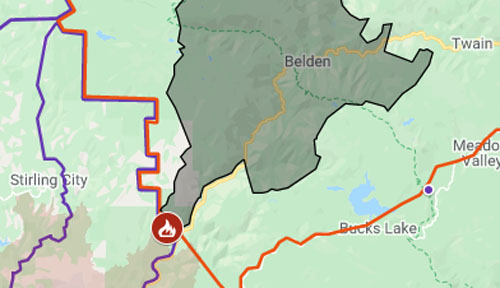 The Dixie Fire is poised to become California’s biggest wildfire of the season, having surpassed 100,000 acres and prompting evacuations along Lake Almanor’s west shore.

Thursday morning’s report from the California Department of Forestry and Fire Protection put the area burned at 103,910 acres (162 square miles), with 17% containment. That was about 18,000 acres more than 24 hours previous.

The black line on the map above shows the latest released perimeter, at about 97,000 acres.

The largest fire of the California wildfire season so far is the Beckwourth Complex, which burned 105,670 acres in Plumas and Lassen counties and is 96% contained.

The Dixie Fire’s growth to the north on Wednesday prompted evacuation orders on the western shore of Lake Almanor as well as the closure of Highway 89 along the lake’s edge.

About 500 square miles of Butte and Plumas counties are under evacuation orders. The mandatory evacuation zone is marked by orange lines on the map above and is shown in more detail on the map below. It includes Prattville, Big Meadows, Lake Almanor West, Canyon Dam, Jonesville, Philbrook, High Lakes, Seneca, Bucks Lake, Snake Lake, Meadow Valley, Tollgate and the Highway 70 communities of Rock Creek, Storrie, Tobin, Belden and Twain.

Highway 70 is closed between Jarbo Gap and Highway 89, the California Department of Transportation said on Monday. Those closures are indicated by orange dots.

The Pacific Crest Trail is also closed, between Bucks Summit and the north edge of the mandatory evacuation zone (purple dots). Hikers are urged to stay off the trail between Quincy-Laporte Road and Highway 36 near Chester.

The fire was reported around 5 p.m. July 13, along Highway 70 just north of the scar of the 2018 Camp Fire. That fire’s perimeter is indicated by the pale red tone.

CELEBRITIES BORN ON THIS DAY: Julianne Hough, 33; Judy Greer, 46; Josh Holloway, 52; Carlos Santana, 74. Julianne Hough (Photo by Jordan Strauss/Invision/AP)  Happy Birthday: Be yourself, make decisions based on what you want, and refuse to let anyone push you around. Speak on your behalf and make the adjustments that add to your comfort […]

By Forrest Brown and Megan Marples | CNN Editor’s note: Because almost all US states have eliminated Covid-19 travel restrictions, CNN will be updating this story less frequently. The 50-state listing was lasted updated in its entirety on July 6. CNN will resume more frequent updates if needed. Total cases of Covid-19 reached around the […]

By Krutika Pathi and Yirmiyan Arthur | Associated Press NEW DELHI — As coronavirus cases ravaged India this spring, Anil Sharma visited his 24-year-old son Saurav at a private hospital in northwest New Delhi every day for more than two months. In May, as India’s new COVID-19 cases broke global records to reach 400,000 a […]