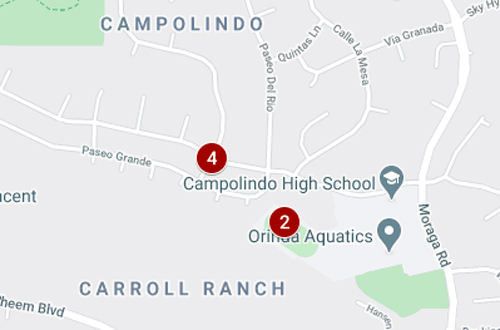 Traps have been set for a coyote in the East Bay after saliva tests attributed four recent attacks on humans to the one animal.

Four people were bitten along a four-mile stretch of Moraga Road since July:

Dec. 4, 2020: A man was bitten on the leg as he prepared to do pushups during a workout after dark on the football field of Campolindo High School.

Dec. 15, 2020: An employee was bitten while taking a break at night behind Diablo Foods in Lafayette.

Feb. 16, 2021: A 3-year-old girl was bitten while walking with her mother two blocks west of Campolindo High.

Wildlife officials say coyotes are generally easy to scare off, and attacks on humans are rare. In areas where coyote attacks have occurred, avoid walking during twilight or in the dark and keep dogs on a leash. (Coyotes in urban areas tend to be more nocturnal than those in rural and wild areas.)

If you do encounter a coyote:

Stand tall, look the coyote in the eyes and shout at it. You can also throw things to scare it off.
Don’t run or turn your back. Those behaviors might encourage the coyote to see you as prey.
Hold your leashed dog close to you or, if it’s small, pick it up.
From February to July, a coyote that won’t be run off may be protecting a den of pups. In that case, maintain eye contact and assertive stance and walk calmly away without turning your back completely.

Woman using outhouse attacked by bear, from below

Will anything stop birds from pooping in San Jose yard?

Harriette Cole: I’m a highly paid Instagram influencer, and they denigrate my work

DEAR HARRIETTE: I have recently gained a lot of attention through social media (Instagram, specifically) as a brand influencer. I get paid a substantial amount of money to simply take a few pictures and promote brands from all over the world. Harriette Cole  My friends don’t seem to be supportive of my career at all. […]

By ZEKE MILLER, LINDA A. JOHNSON and JONATHAN LEMIRE WASHINGTON (AP) — President Joe Biden said Tuesday that the U.S. expects to take delivery of enough coronavirus vaccines for all adult Americans by the end of May, two months earlier than anticipated, as his administration announced that drugmaker Merck & Co. will help produce rival […]

Opinion: How can we condemn Proud Boys, yet tolerate similar behavior by liberals?

Do we give liberal protesters a pass? James Harris (Kristopher Skinner/Bay Area News Group) During the year prior to the global shutdown and pandemic, the Oakland School Board was repeatedly unable to meet publicly due to protests designed to disrupt and derail the democratic process. Not only did these acts disenfranchise Oakland citizens, at times the […]