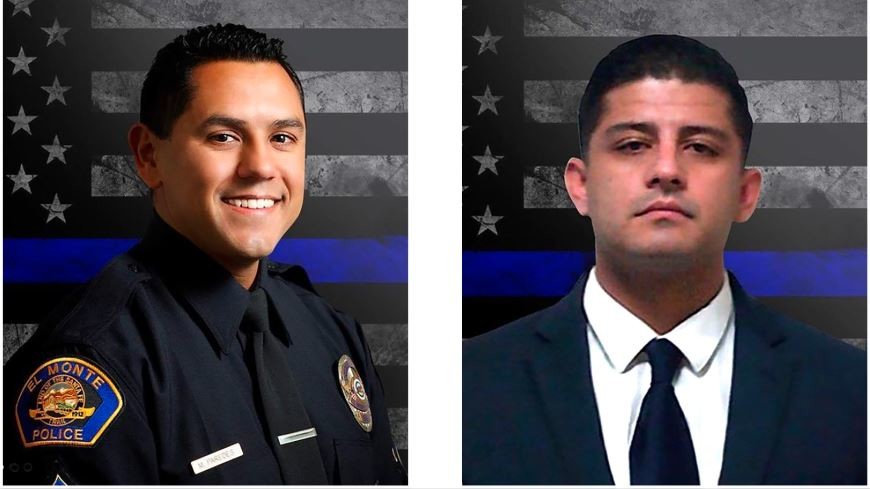 A man accused of ambushing and killing two police officers at a motel in El Monte died of a self-inflicted gunshot wound to the head, according to the Los Angeles County Coroner’s report.

Justin Flores was pronounced dead on a sidewalk outside the Siesta Inn shortly after he shot and killed Cpl. Michael Paredes and Officer Joseph Santana when they responded to the motel on a report of a possible stabbing Tuesday, June 14, the report states.

After shooting both officers in the head, Flores ran out into the parking lot and exchanged a second volley of gunfire with other officers who arrived, authorities said. It wasn’t known how long Flores exchanged gunfire with police before turning the gun on himself.

Whether he also was struck by the officers was not disclosed.

El Monte police Cpl. Michael Paredes, 42, and Officer Joseph Santana, 31, were both fatally shot in the head on Tuesday, June 14, 2022, according to the coroner’s office. The officers died in a shootout with a suspect, Justin Flores, at the Siesta Inn at 10327 Garvey Ave. in El Monte. Flores was also fatally shot. (Photo courtesy of the El Monte Police Department)

The memorial in front of El Monte City Hall for Cpl. Michael Paredes and Officer Joseph Santana who were shot and killed during a confrontation with a suspect at the Siesta Inn on Tuesday, June 14, 2022. The public and law enforcement continued to leave flowers for the officers on Thursday, June 16, 2022. (Photo by Ruby Gonzales, San Gabriel Valley Tribune/ SCNG)

Olga Garcia, mother of slain officer Joseph Santana speaks about her son and a recall of DA Gascon during a press conference about the recall of Los Angeles district Attorney George Gascon and fallen officers including the two police officers that were shot and killed earlier in the week at the El Monte Police Dept. in El Monte on Friday, June 17, 2022. (Photo by Keith Birmingham, Pasadena Star-News/ SCNG)

A makeshift memorial with a sign that reads “Long Live Justin Flores, We Love You” in front of the Siesta Inn where two El Monte police officers were killed along with the suspect in El Monte on Thursday, June 16, 2022. (Photo by Keith Birmingham, Pasadena Star-News/ SCNG)

“Bubble Watch” digs into trends that may indicate economic and/or housing market troubles ahead. Buzz: The stock market is officially in a bear market downturn, and that’s rarely good news for California’s economy. Source: Using the definition of a bear market as a 20% drop in the S&P 500 stock index, my trusty spreadsheet looked […]

Orioles win fourth straight, 6-2 over White Sox, to continue best stretch since 2017: ‘It’s just been so much fun’

Despite the long strings of losses the Orioles have endured during his four-year managerial tenure, Brandon Hyde has often praised his team’s ability to metaphorically get hit, then hit back. In the span of three pitches Saturday, the Orioles did so to clinch a series victory on the road over the Chicago White Sox, downing […]

Rina Sawayama is taking the British country scene by storm — not that there’s much competition as a Brit in the “big Wild West.” Here’s what the “This Hell” artist said about her exploration into country-pop music and her interest in this music genre.  Rina Sawayama released her single ‘This Hell’ in 2022 Japanese-British singer-songwriter […]