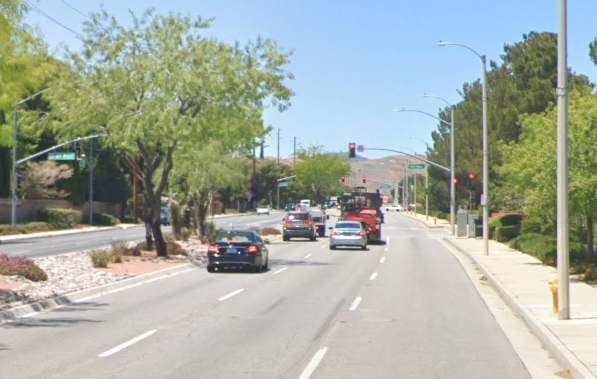 A ride-hailing driver and his customer were killed in a fiery crash Wednesday in Palmdale, and street racing is suspected, Los Angeles County sheriff’s officials say.

The other driver abandoned his car and fled.

The victims were Lyft driver Lesther Deleon, 37, and Spechelle Pope, 28, whom he was taking to a grocery store around 12:30 a.m.. Deleon’s Toyota Corolla was hit from behind by a Dodge Challenger that was allegedly speeding on city streets near the Antelope Valley Mall, sheriff’s officals said.

Sheriff’s Detective Liz Sherman said the impact pushed the Toyota into a light pole and the car caught fire, KABC reported. The Toyota was not involved in the suspected race, she said; no description of a third car was released.

An employee from a nearby Denny’s who saw the aftermath of the crash told TV station KCAL that the driver of the Challenger abandoned it and was picked up by another car.

KCAL reported that the Challenger was registered to a car rental agency.

A dozen years after opening its first upscale Silicon Valley steakhouse, the Left Bank/Vine Hospitality restaurant group has expanded to the East Bay. LB Steak is now open at City Center Bishop Ranch in San Ramon, with outdoor seating and limited indoor dining and bar seating. The steakhouse is an offshoot of noted chef Roland […]

Contra Costa man died of overdose in isolation cell after hospital visit, coroner says. But no one can explain how he got the fentanyl

MARTINEZ — A 30-year-old man died over a fentanyl overdose while he was inside an isolation cell at the Martinez Detention Facility, where he’d been for the past 16 hours after a visit from the hospital, a forensic pathologist testified at an inquest hearing last week. But while the cause El Sobrante resident Ezekiel McCoy’s […]