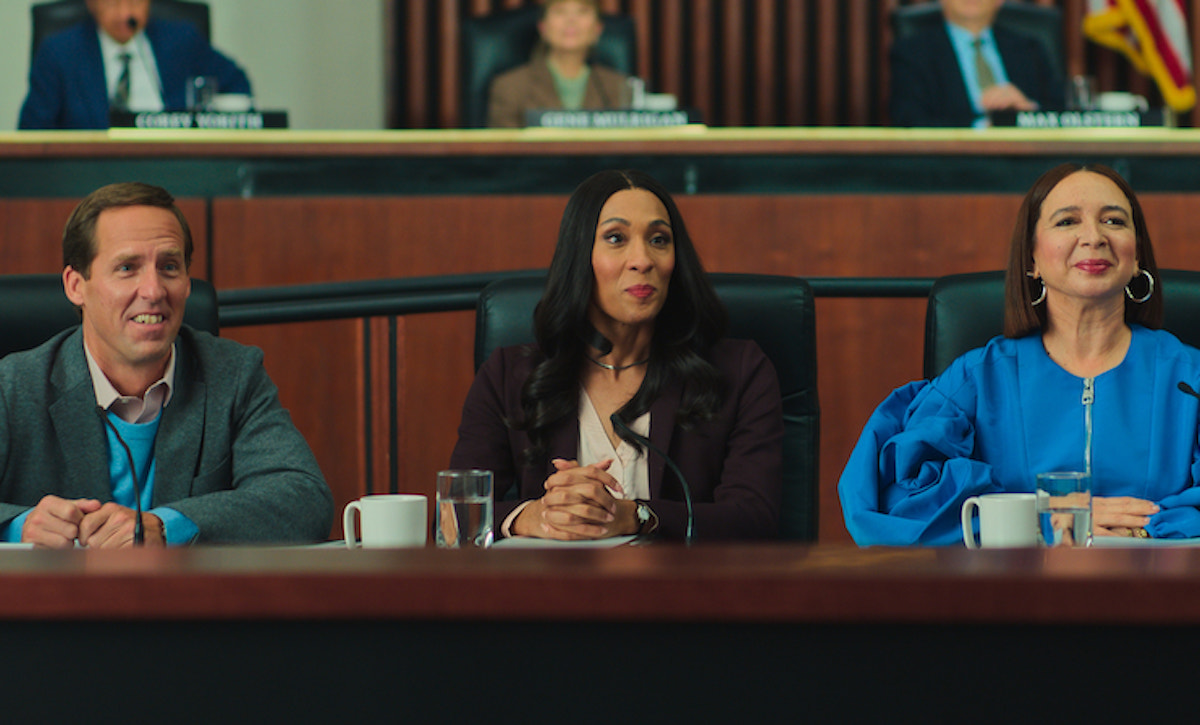 It’s a big day for Molly (Maya Rudolph) and everyone at the Wells Foundation in Loot Season 1 Episode 9: “Cahoga Lake.” There are not one but two surprises at the office in the Aug. 5 episode of the Apple TV+ workplace comedy. Plus, Nicholas (Joel Kim Booster) lands a new role.

‘Loot’ recap: Molly and Sofia make announcements at the office

In Loot Season 1 Episode 9: “Cahoga Lake,” which began streaming on Aug. 5, 2022, according to Apple TV, Sofia, played by Pose’s MJ Rodriguez, shares an update on the zoning proposal. The board of supervisors is greenlighting the foundation’s housing project, and everyone’s invited to watch the vote.

Then comes the second surprise. Molly brings in Jean-Pierre (Olivier Martinez) to announce they’re all going to the Silver Moon Summit. Not only that but while there she and Jean-Pierre will give a “super special” presentation on a water filtration machine.

Soon after, Nicholas gets a surprise of his own. Remember when he auditioned for a play in the July 1 episode of Loot? Well, the small role he landed is suddenly a big one. He’s now playing the lead in “Cahoga Lake.”

Nicholas tells Howard (Ron Funches) about the new development, and they spend the rest of the day preparing. Along the way, Howard breaks up with his longtime girlfriend.

Molly gets a pie in the face after the zoning meeting

The zoning meeting doesn’t exactly go as planned. There’s a slight hiccup during the vote. One after another, local residents slam Molly (“You are disgusting!”) and the housing project. However, despite the negative comments, the project is approved.

Molly’s in for a surprise on her way out of the meeting. And it’s not a good one. “Eat s**t, billionaire,” someone yells at her as they throw a pie in her face. Arthur steps forward to protect Molly, but he too gets a pie thrown at him. There to witness all of it — and get pie on her clothes — is Sofia.

At the police station, Molly and Arthur have a moment. For a few seconds, their witty banter is back. Then, on a more serious note, Molly thanks him for being her “bodyguard.” Arthur replies, saying he had the sudden urge to protect her.

The moment is over just as fast as it began when Jean-Pierre shows up to take Molly home via helicopter.

Loot Season 1 Episode 9 wraps up with Nicholas taking the stage. Howard, his newly reinstated friend, gives him a pep talk backstage. It must work because Nicholas proceeds to give a moving performance. Howard even tears up and gets to his feet when …read more

Jason Scott Lee (the live-action Mulan remake, Disney+’s Doogie Kameāloha, M.D.) has appeared in numerous roles. But he’s perhaps best known for portraying the legendary Bruce Lee in the 1993 biopic Dragon: The Bruce Lee Story. In preparation for the role, Jason Scott Lee trained with a student of the late martial artist. ‘Dragon: The […]

Exactly 40,065 showed up for an Oakland home game, a sentence that seemingly hasn’t been written since the 1980s, the long-gone decade the team celebrates with iconography around every crevice of the green and grey fortress. In a season where sub-10,000 attendance days have been the norm, seeing the Coliseum teem with fans from both […]

Dear Abby: I’m trying not to flip out about the sisters’ over-the-top texts

DEAR ABBY: I have two friends who are sisters. They text me every day throughout the day, sharing every thought and every little thing that happens to them. Also, they constantly invite me over to their homes and try to manipulate me into coming over. One does it by telling me her daughter loves me […]