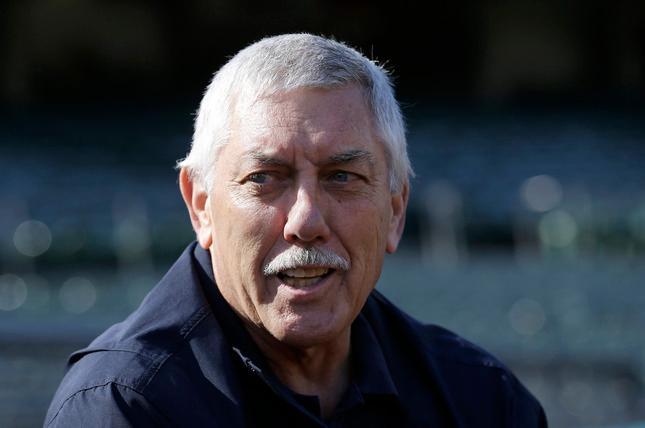 Longtime Oakland A’s broadcaster and catcher Ray Fosse died on Wednesday after a 16-year battle with cancer. He was 74.

“It is with a heavy heart that Carol Fosse, Ray Fosse’s wife of 51 years, shares the sad news that Ray Fosse lost his battle to cancer on October 13, 2021 after silently fighting it for the past 16 years,” read a statement on the website. “Carol and daughters, Nikki and Lindsey, send their love out to family, friends and fans that mourn his loss with them.”

Of Fosse’s 12 seasons in the major leagues, he spent three with the A’s and won two World Series titles with Oakland’s Swingin’ A’s in 1973 and 1974. In that time, the tough catcher made an imprint on the A’s franchise that lasted more than five decades.

“He got traded to the A’s in ’73, but that’s a long time to be so associated with a franchise,” A’s radio play-by-play announcer Ken Korach said. “He took that responsibility very seriously.

“He cared deeply about the franchise. he loved this organization and he cared so much. I think the fans know that. For all the right reasons he was a beloved figure.”

Korach and Fosse worked together in A’s booths for 26 years, and Korach saw how Fosse’s strong work ethic shaped work behind the microphone as a color commentator that transcended baseball eras. His storied career lent itself to a natural rapport with players. Fosse spent time with the A’s, Seattle Mariners, Milwaukee Brewers and Cleveland Indians, caught no-hitters from Paul Lindblad and Rollie Fingers in 1975 and Dennis Eckersley in 1977. He was twice named an All-Star, famously part of a home-plate collision in which Reds’ Pete Rose bowled over him in the 1970 game.

Fosse joined the A’s broadcast team under Hall of Fame voice Bill King and, like him, became a fountain of baseball knowledge. While some former players may take the broadcasting opportunity for granted, Fosse transformed himself into a walking baseball encyclopedia. He carried a briefcase of notes he’d taken over his 35 seasons broadcasting, chronicling every moment with impressive recall of any pitch or play.

Like King, who died abruptly in 2005, Fosse kept his health battles private. Most of his colleagues didn’t know of his cancer battle until this year.

“Ray is a private person,” Korach said. “I respect the fact this is the way he wanted it to be in the end and I have total respect for that.”

Fans hung banners over the Coliseum bleacher fences rooting for Fosse’s recovery, lending their support. After learning of his death, fans all over social media expressed their sorrow and gratitude for Fosse. Broadcasters can become close friends to the fans they talk to, Korach says.

“He was in peoples’ homes for 36 years,” he said. “He was part of the family, and I don’t think that’s overstating it, that people felt that way about him.”

A close friend to the entire A’s fan base, Fosse was especially close to those in the A’s organization, too. Radio color …read more

California’s fleet of offshore oil and gas rigs, and the miles of pipelines that connect those rigs to on-shore refining operations, feature some of the most advanced technology the industry has to offer. Out at sea, computerized systems on the manned platforms can detect even tiny leaks in the pipelines, monitoring the pressure and flow […]

‘The Bold and the Beautiful’ Speculation: Eric Demands Quinn Choose Between Him and Carter

(CNN) — A federal judge ruled Monday that the University of North Carolina did not discriminate against applicants who were White and Asian American during the university’s undergraduate admissions process, according to court documents. The ruling comes following a lawsuit filed in 2014 by the group Students for Fair Admissions, which argued UNC used race […]