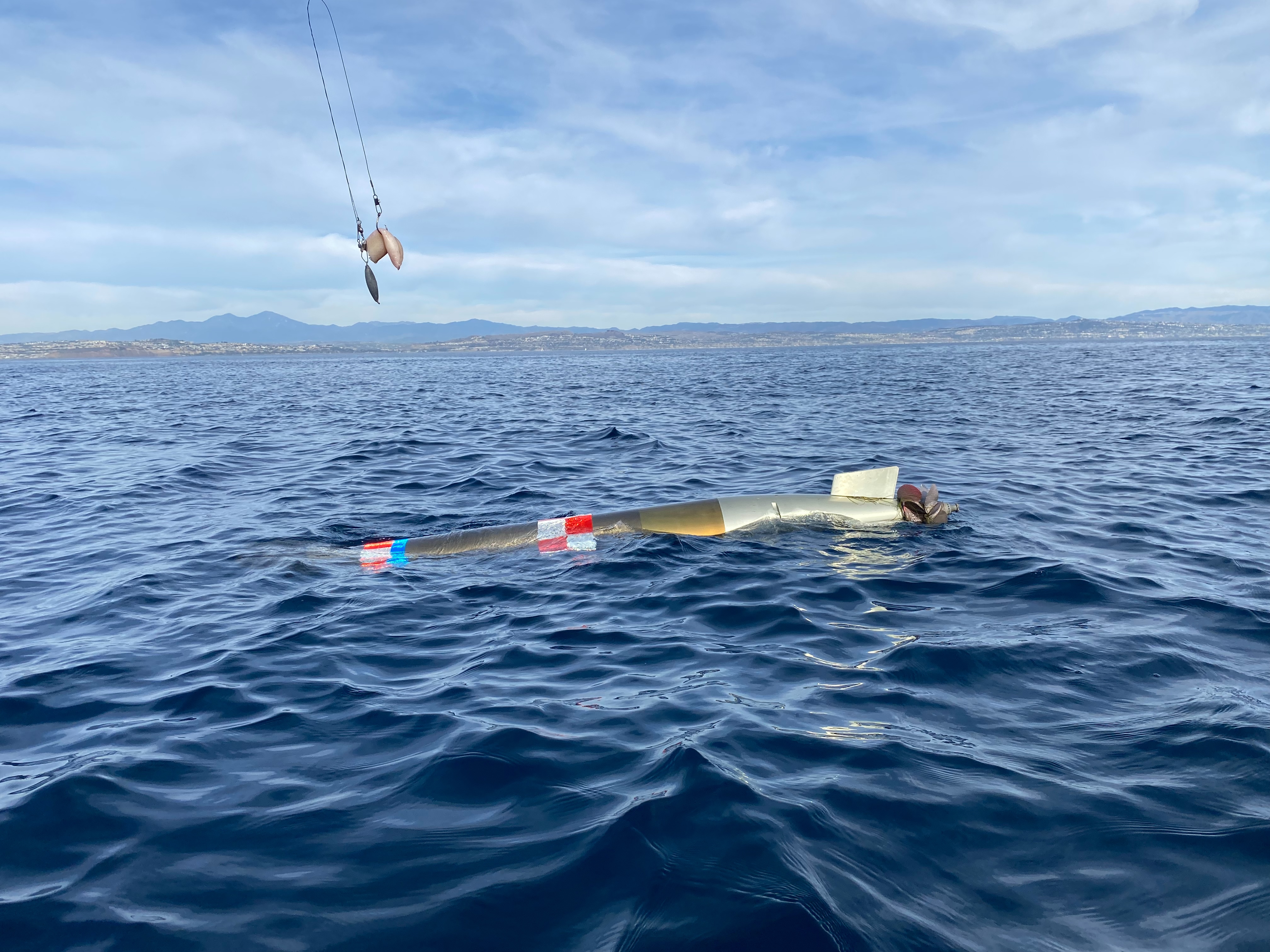 A team of sailors from the Navy Explosive Ordnance Disposal Detachment Southwest out of Coronado responded this afternoon after the object found floating in the water Monday, Nov. 21, was identified.

A lightweight Navy torpedo was found in the ocean off Dana Point.
(Courtesy of Sgt. Scott Steinle)

A Harbor Patrol boat and Navy inflatable arrive at the scene of the floating torpedo. The torpedo was later identified by the Navy as a “recoverable exercise torpedo.” (Photo courtesy of Sean Sheehan)

Looking at photos, the object was confirmed to be a recoverable exercise torpedo, said Cmdr. Sean Robertson, spokesman for the Navy’s 3rd Fleet, and the team was sent to pick it up. “It has no propulsion system or explosives.”

Robertson said the torpedoes are dropped from aircraft or ships in training. Most are retrieved by a recovery vehicle, but sometimes they are missed, he said.

Sgt. Scott Steinle, a spokesperson for OCSD, said the department’s Harbor Patrol heard a broadcast around 1:30 p.m. from the Los Angeles County Sheriff about the torpedo being spotted.

The torpedo was first discovered by Sean Sheehan, a Dana Point boater, who was out on the water looking for dolphins and whales. Sheehan said he was in the midst of a dolphin stampede around 1 p.m. when he sighted the torpedo at about 30 feet away.

“I crept up on it and thought, ‘Oh my God, it’s a torpedo,’” he said, adding that he took pictures of it from a distance and then called the Harbor Patrol, which confirmed it would come out to investigate.

Sheehan said he stayed in the area to alert other boaters and waited for law enforcement to respond. When time passed and no one came out, he said he called the Coast Guard, asking if they had been made aware of the situation. They told him they had coordinated with the Navy on the planned recovery, he said.

Shortly thereafter, Sheehan said Harbor Patrol showed up and not much later, he saw a Navy inflatable with six to eight guys in it.

“They were all dressed in black,” he said. “We hung out a bit longer and then left it in their hands.”

Sheehan, who was in a 16-foot ski boat known as the Q2O, said he was mildly concerned for his safety.

“We figured it wasn’t live with all the training out here,” he said. “We figured it if was live, they’d have an eye on it, and not just leave live ammunition in the ocean.”

Serra turns back Mitty in CCS D-I final, cements itself as one of section’s greatest teams

SAN JOSE — The journey began a couple of hours from home, at the foot of the Sierras. A victory over Folsom that late August night was followed by another on the road over De La Salle and then a dominant sweep through the West Catholic Athletic League and two playoff rounds. Friday night, the […]

‘My Unorthodox Life’: Batsheva Haart Offers Insight Into Her Divorce From Ben Weinstein in Season 2 Opener

Season 2 of My Unorthodox Life is full of drama for Netflix viewers. The Haart family is dealing with two different divorces and their fallout. One divorce, Julia Haart’s divorce from Silvio Scaglia, has been bitter and dramatic. The other, the end of Batsheva Haart and Ben Weinstein’s marriage, has been decidedly more muted. Still, Batsheva is […]