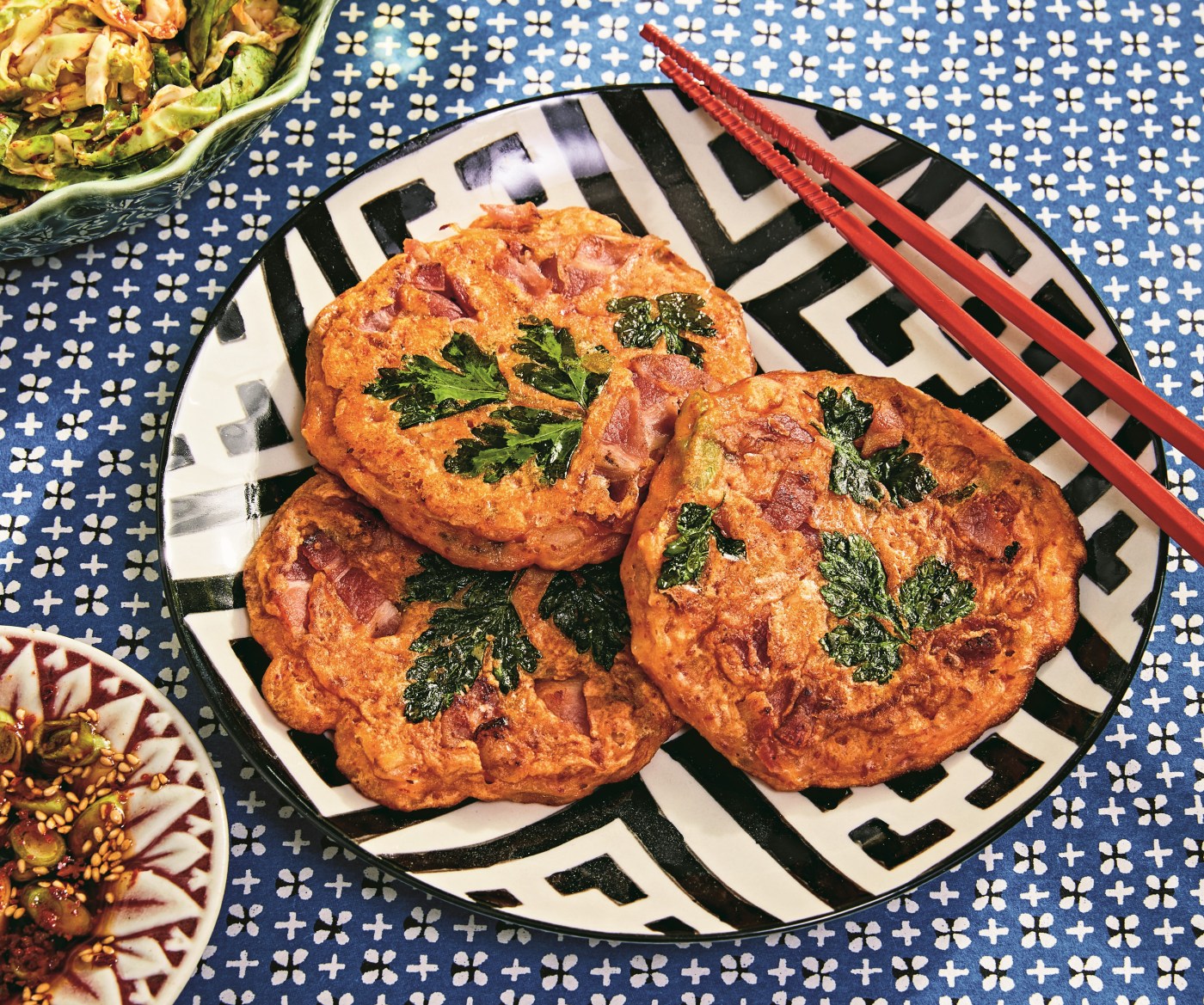 Kimchi jeon are pancakes made primarily from chopped kimchi, kimchi juice and a little flour. In his 2021 cookbook, “Korean American: Food That Tastes Like Home,” author and New York Times food writer Eric Kim says jeon is often considered a party food, but has always been an everyday staple for his family.

This version, featured in the cookbook, has pressed-in parsley and uses bacon fat, but you can use any herb and oil. Whether you make them for Korean Lunar New Year or as a quick weekday lunch, be sure to serve them with white rice and a little soy sauce and rice vinegar for dipping.

Make the dipping sauce: In a small dish, stir together the soy sauce, vinegar, sesame seeds, gochugaru and scallion. Set aside.

Make the jeon: Add the bacon and olive oil to a cold large nonstick skillet. Set the pan over medium-high heat and fry the bacon, stirring occasionally, until crispy on all sides, 3 to 4 minutes. Remove the bacon with a slotted spoon to a plate lined with paper towels. Transfer the bacon fat to a small dish, leaving 1 tablespoon in the pan to fry the first batch of jeon.

Heat the pan with the bacon fat over high heat. Ladle about ¼ cup of the batter into the hot fat. You should be able to fit 2 to 3 jeon in the pan at a time. As they fry on the first side, neatly lay the parsley on top and press down slightly so the leaves stick. Sprinkle some of the reserved cooked bacon on top. Fry until lightly browned and crispy, about 2 minutes per side, then transfer the jeon to a large platter while you cook the rest of the batter, adding more bacon fat to the pan between batches.

These are best eaten as soon as they come off the heat. Serve with the dipping sauce.

For more food and drink coverage
follow us on Flipboard.
…read more

‘Married at First Sight’: Domynique and Mackinley of Nashville Reportedly Don’t Move in Together After Honeymoon

Season 16 of Married at First Sight is in Nashville for the first time and the five couples matched are keeping viewers entertained. While it’s too soon to determine who will stay together, each teaser for the next episode promises that there are many explosive moments to come. Rumors have swirled that one couple don’t […]

Richmond: One dead in fatal I-80 collision