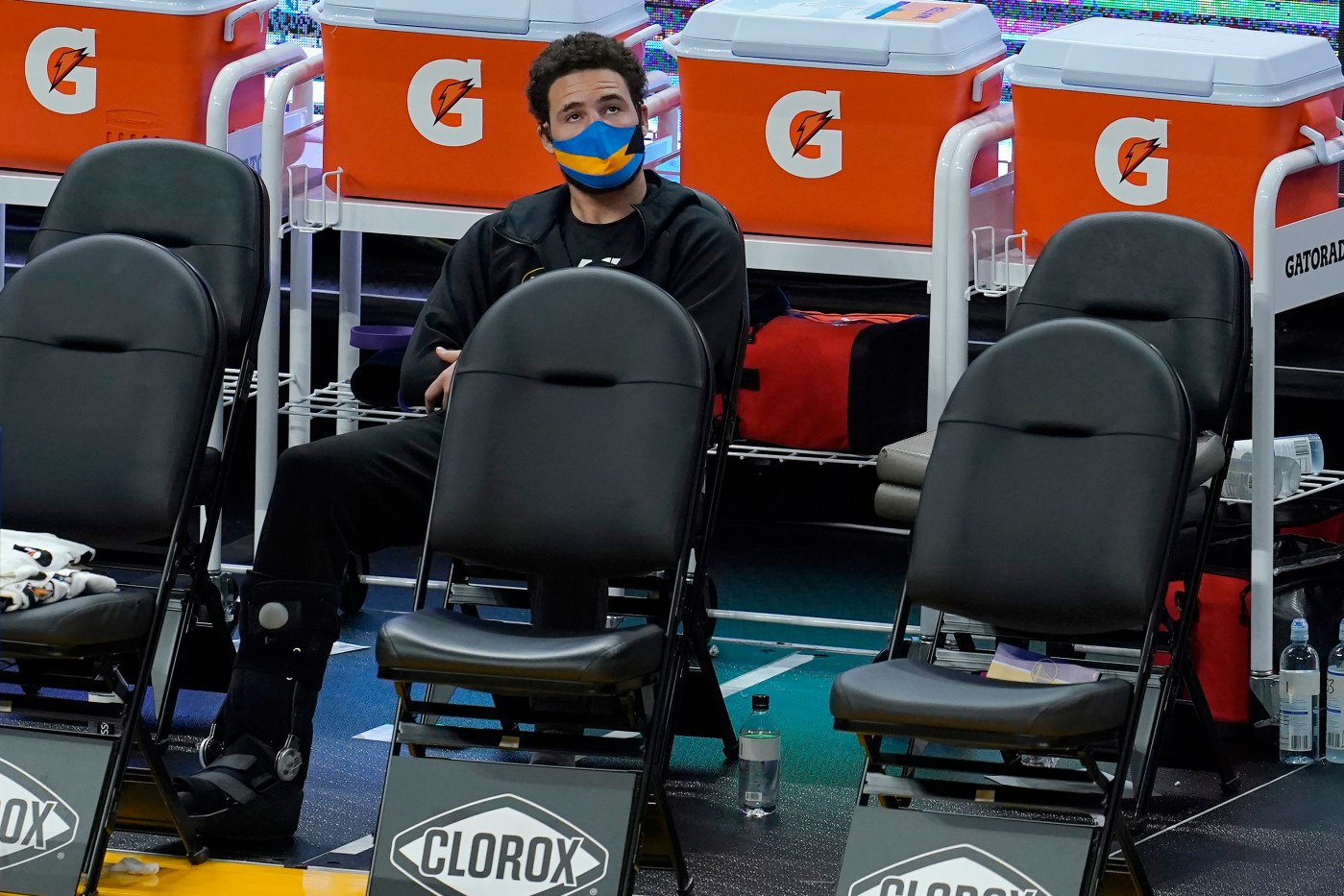 As much as the Warriors and their fans loved seeing Klay Thompson at Chase Center Tuesday night, they’ll enjoy what he told coach Steve Kerr even more.

Thompson, making his first trip to see the team play this season, gave Kerr an optimistic update on his recovery from an off-season, season-ending Achilles tendon injury.

“I talked to Klay before the game,” Kerr told reporters following a 104-95 loss to Indiana. “It was great to see him. He’s in really good spirits. He’s happy to be up here with his teammates.

“In his words, the worst is behind him.”

Great sign seeing #klaythompson walking at this point in his rehab. The walking boot helps to control plantar-flexion of his ankle; which prevents stress on the repair. Looks like he is on track so far in his recovery. Nice looking splint on Marquese Chriss as well! @warriors https://t.co/B1F8R1o1Ki

Kerr also revealed Thompson, who is in a walking boot these days, is about to take another important step in his recovery process.

“He’s going to be able to get into the pool next week and start running in the pool. He was very upbeat about everything. It was great to see him,” Kerr said.

KLAY IS IN THE BUILDING pic.twitter.com/9YVdY9eYgg

That kind of positive update takes a bit of the sting out of not having Thompson playing for a second straight season.

And, even though Thompson can’t get on the court, Kerr and the Warriors believe just having him courtside and in the locker room as much as possible is therapeutic for all involved.

Photos: Spying on Klay Thompson at first Warriors game of the season

With the Warriors embarking on a three-game road trip beginning Thursday night in Denver, perhaps Thompson makes another appearance when the team returns to Chase Center next Wednesday against the Spurs?

That would be welcome news for all, especially Kevon Looney, the Warriors’ sixth-year post player who was overjoyed to have Thompson around Tuesday.

Photos: Spying on Klay Thompson at first Warriors game of the season

Takeaways from the Warriors’ 104-95 loss to the Pacers

Kurtenbach: James Wiseman is discovering his super powers at a rapid rate

Frontline health care workers are about as skeptical of COVID-19 vaccination as the population at large, surveys have found, but the reluctance of some to roll up their sleeves has surprised nonetheless. From Orange County’s COVID-19 Vaccine Hesitancy Survey  About half of hospital workers in Riverside County are passing on the vaccine for now, county […]

It took 25 seasons and a whole lot of critical outcry, but “The Bachelor” finally has its first Black leading man. Tonight, Matt James welcomes 32 love-starved women as another run for the roses begins (8 p.m., ABC). Bri  Among the women vying for James’ heart are a couple of San Francisco residents — Bri, […]

By Kaitlan Collins and Kevin Liptak | CNN On the day he will be impeached for a history-making second time, President Donald Trump lacks a comprehensive legal strategy, has nothing on his public schedule and is without his preferred social media methods of responding — in part because his son-in-law put a stop to efforts […]