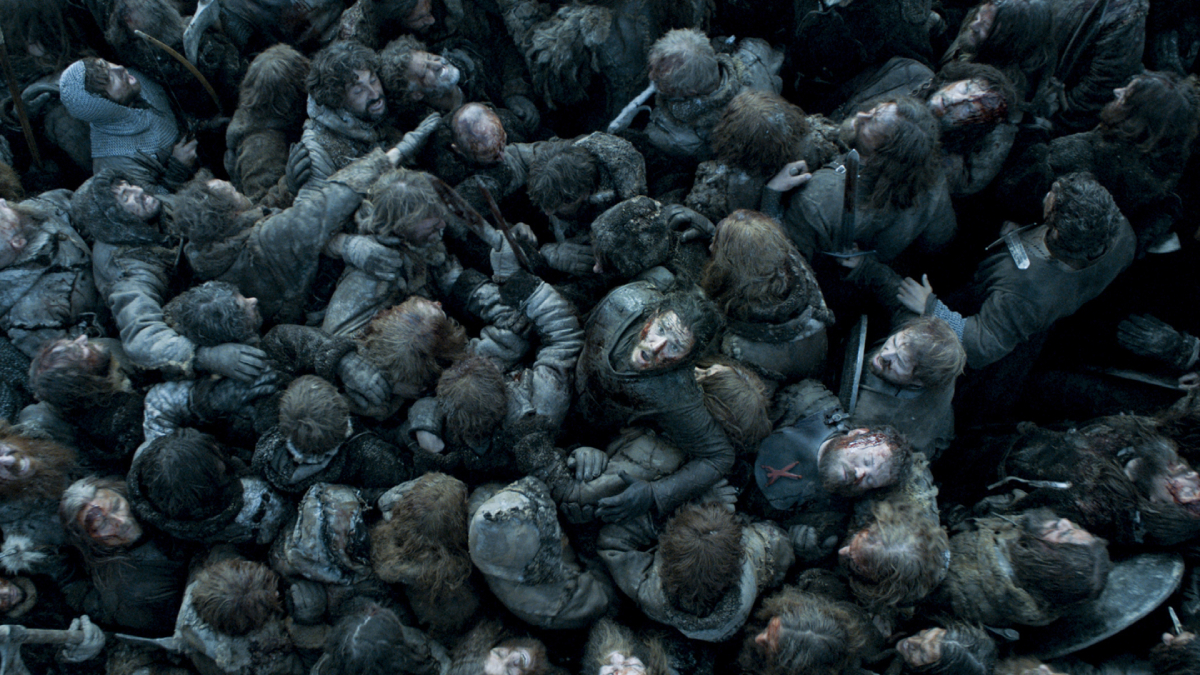 Kit Harington played Jon Snow on Game of Thrones for eight seasons over the span of a decade. Fans will recall that one of the biggest moments for his character was in the season 6 episode “Battle of the Bastards.” According to Harington, he actually hit his co-star Iwan Rheon (Ramsay Bolton) when filming the episode. But he thinks fans were probably okay with it.

The Battle of the Bastards was a spectacle of an episode that featured Jon Snow and Ramsay Bolton facing off in a battle for control of Winterfell. The episode required 500 extras and stuntmen, 600 crew members, and 25 days to shoot.

They did use some visual effects to duplicate the extras and show arrows flying. But, their use of CGI was extremely limited. Instead, the majority of the action on-screen in that episode of Game of Thrones was done in real life.

During the battle, Jon brandished Longclaw and was prepared to fight to the death. And that’s almost what happened. He was trampled by his own forces and nearly suffocated under a group of his own men who were crawling on top of him.

Jon managed to survive and bust out of the crowd, with Sansa and Littlefinger arriving just in time with the Knights of the Vale. Later in the episode, Ramsay retreats to Winterfell and accepts Jon’s offer of single combat. That’s when Jon overpowers Ramsay and starts beating him to death.

The Battle of the Bastards was the showdown that fans had been waiting for, and that face off wasn’t easy to film. Per Vanity Fair, Harington admitted he accidentally punched Rheon in the face not once, but twice, when filming that brutal single combat scene. Apparently, pretending to beat someone’s face into a bloody pulp isn’t as easy as you might think.

“I actually did punch Iwan in the face twice by accident,” Harington said. “Which he took really well. He was really nice about it. So I had to buy him a pint after that one.”

Considering that Rheon played one of the most loathsome villains in all of Game of Thrones, fans were probably okay with Harington’s accidental punches — and so was Rheon.

“That was good,” Rheon said. “Jaw hurt a bit the next day. But you know, it’s understandable.”

The director of the episode, Miguel Sapochnik, says they spent an entire day “beating Ramsay.” He described shooting that scene as “a little surreal but mostly fun.”

“I mean you have to make it fun to take the nastiness out of it on set,” Saochnik told Entertainment Weekly.

“Poor Iwan took it on the chin a few times but he did an amazing job. They both did. There’s this weird moment that made the final cut when Iwan stops …read more

‘The Umbrella Academy’ Will ‘Dig More Into’ Ben’s Lethal Accident

Justin H. Min in ‘The Umbrella Academy’ Season 3 | Christos Kalohoridis/Netflix So why didn’t the show start with more information about Ben’s past? The show’s co-creator gave a good reason to The Umbrella Academy has kept one aspect of the main characters a mystery. Ben Hargreeves (Justin H. Min) died long ago, and fans […]

Bob Odenkirk | Greg Lewis/AMC/Sony Pictures Television Odenkirk was a guest on The Treatment on June 11. While discussing the ending of Better Call Saul with host Elvis Mitchell, Odenkirk shared the Newman song that reminds him of Jimmy. Better Call Saul Better Call Saul is ending. Fans are eagerly anticipating the conclusion and Better […]