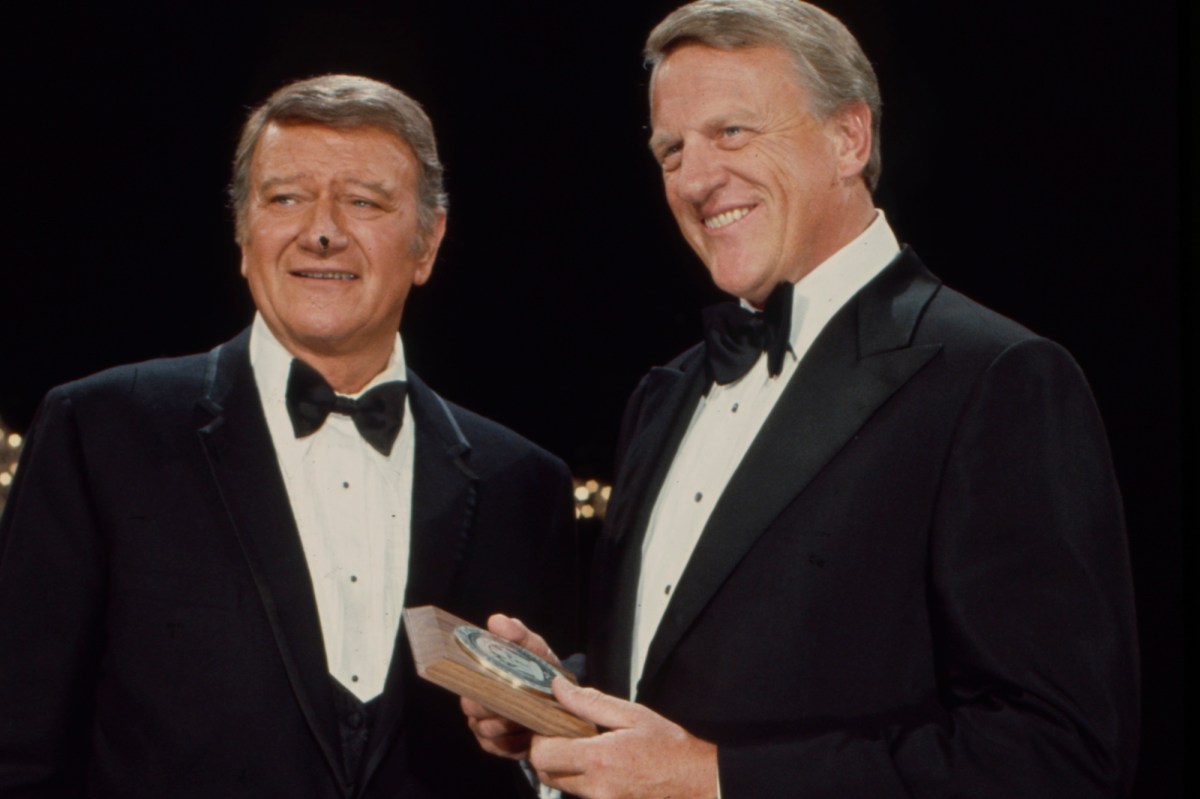 Legendary Western movie star legend John Wayne helped make James Arness the notable actor that he became. However, it all came down to one fateful interview that decided their fate to go into business together. Wayne asked Arness one “main” question that he thought was important, but it instantly made the Gunsmoke actor uncomfortable. Nevertheless, he gave the correct answer, as they developed a wonderful working and personal relationship.

James Arness got his start in theater

Long before Arness met Wayne, he started his career in the entertainment industry on accident. He tagged along with a friend to a local theater, where he quickly attracted attention. As a result, Arness gave acting a shot for fun, which he was able to turn into a very successful career for himself.

However, Arness had a difficult time when it came to getting roles in Hollywood. He stood at a tall 6’7″, which intimidated many of the leading men. Therefore, they refused to work with him because they thought it made them look bad. Arness picked up roles in pictures such as The Thing from Another World, but one interview with Wayne would change his life forever.

James Arness and John Wayne were friends in real life and share a birthday. It’s only right that we celebrate with the Dillon & The Duke Birthday Bash, May 26th at 10AM ET. pic.twitter.com/ATjTBT69Zq

According to Deseret News, Arness once met with Wayne in a meeting that had him more than a little bit uncomfortable. After all, he didn’t know the type of person that existed behind the tough cowboy aesthetic that the world couldn’t get enough of. Arness met Wayne at his Republic Studio office for the fateful meeting.

“He asked me a couple of questions about my acting,” Arness said. “Then he said, ‘The main thing I have to know, is — do you drink?’ I didn’t want to say, because I didn’t know him at the time; maybe he was a teetotaler. I said, ‘Well, I have been known to take one occasionally.’ We got a laugh out of that, and he put me on the picture, Big Jim McLain.”

Big Jim McLain follows the title character played by Wayne and his partner, Mal Baxter (Arness). They work as investigators for the House Un-American Activvities Committee with the goal of finding the leaders of a local Community Party in Hawaii. However, Jim and Mal are in way over their heads, as they become targets of a Communist boss named Sturak (Alan Napier).

John Wayne convinced him to do ‘Gunsmoke’

James Arness would have been 96 years old today. Who watched him as Marshall Matt Dillion in Gunsmoke? #DoYouRemember #Nostalgia #JamesArness pic.twitter.com/n4KUqNf5zm

December will be a busy month for K-drama fans as many anticipated dramas are set to premiere. As fans gear up for second-season installments of K-dramas like Alchemy of Souls, Netflix has also announced the official premiere of The Fabulous. With so many dramas to keep track of from different networks, here is a list […]