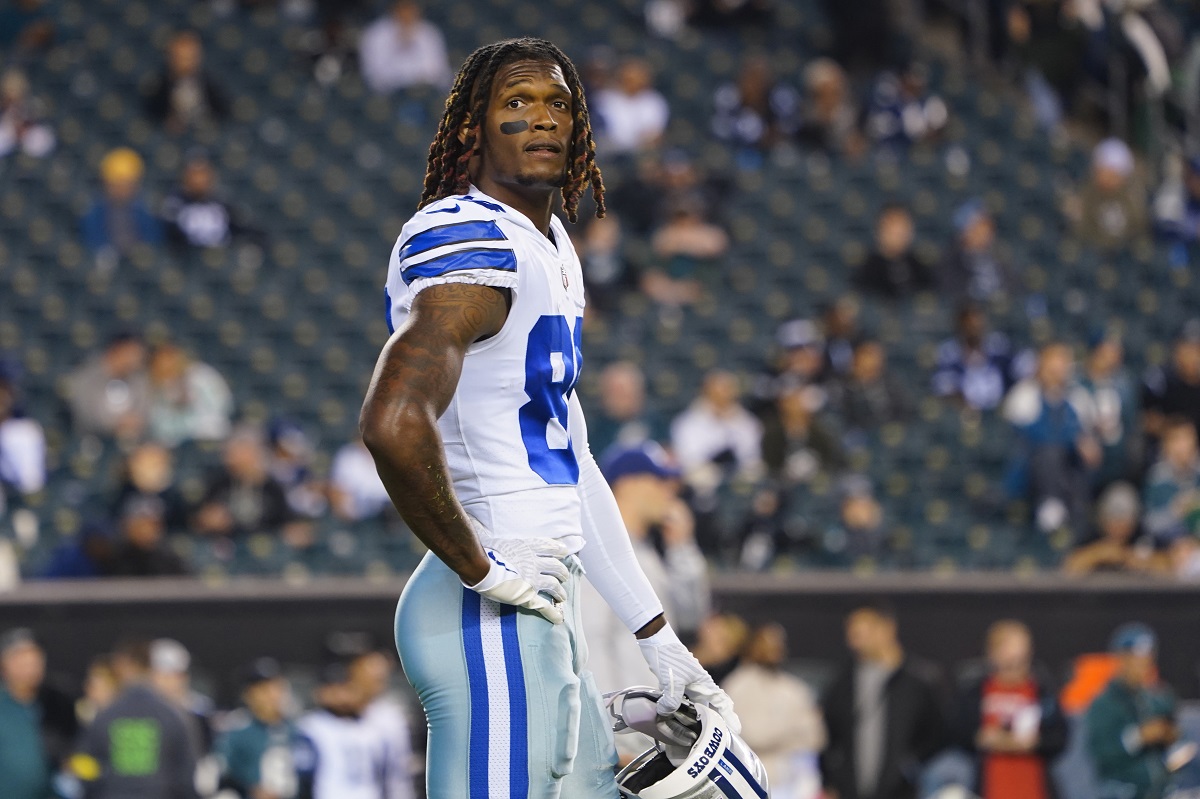 When the Dallas Cowboys selected CeeDee Lamb in the first round of the 2020 NFL Draft, a viral moment was born. Millions watched as Lamb, who was surrounded by family and friends, immediately took his phone from his girlfriend Crymson Rose after she tried to look at it.

Jokes and Twitter memes lit up social media and now years later, some have questioned if Lamb and Rose are still together. Here’s more on that, plus the other professional athlete Rose dated before the wide receiver.

On April 23, 2020, cameras cut to Lamb after he was drafted by the Cowboys. The clip, which quickly circulated on the internet, shows Rose sitting on the couch next to Lamb and taking his cell phone before he grabbed it back out of her hand. Social media dubbed it the “phone snatch” and thousands of people commented.

But after the clip went viral, Lamb took to Twitter himself to explain what happened saying: “Y’all really gotta chill wasn’t even like dat” with a thumbs-down emoji.

Rose also chimed in and responded to what some had posted tweeting: “His agent was FACETIMING him while he was on the phone with the Cowboys, I was doing the GF thing gonna answer it for him … Sheesh.”

The way CeeDee Lamb snatched that phone back ? (via @mixeduppasha) pic.twitter.com/zi33F4Lp8L

Are Lamb and Rose still together?

Rose was born on March 30, 1999, to parents Lori Love and Michael Rose. She has one sibling, a brother named Damon. Rose’s father, who was a former running back for the Oklahoma Sooners, died in a motorcycle accident on Nov. 17, 2005, when Rose was just 6 years old. She attended Norman North High School in Norman, Oklahoma, where she played basketball before enrolling in her late father’s alma mater.

Rose and the wideout began dating in 2019 when they were both students at the University of Oklahoma. Since their public draft night moment, they tried to keep their relationship private and many thought they were still together until recently when Rose put up pictures on Instagram of a new man in her life.

In October 2022, she posted several intimate photos with a mystery man and captioned them: “Happy birthday to my sweetest love. It’s easy to find gratitude in this life with you. With God’s will I’ll be celebrating this day forevaaa.”

Rose dated another athlete before Lamb

Before she dated Lamb, Rose was in a relationship …read more

The Chicago Bulls suffered a 132-113 loss to the Phoenix Suns on Wednesday night as Devin Booker scored 51 points in only three quarters. The loss dropped the Bulls to 9-12 and into the No. 12 spot in the Eastern Conference. Here are six takeaways from the loss. 1. The Bulls had no answer for […]

‘The Young and the Restless’ Spoilers: Adam’s Surprise Proposal

John Wayne Once Lit Ward Bond’s Chest on Fire, Got Banned From Drinking While Filming ‘The Fighting Seabees’

Even Hollywood’s biggest stars need to find solace in friendships of their own. Movie star John Wayne found exactly that in another actor named Ward Bond. They had a longtime friendship that ran deep, as they spent many times drinking and getting up to various dangerous antics together. However, it would occasionally go a bit […]