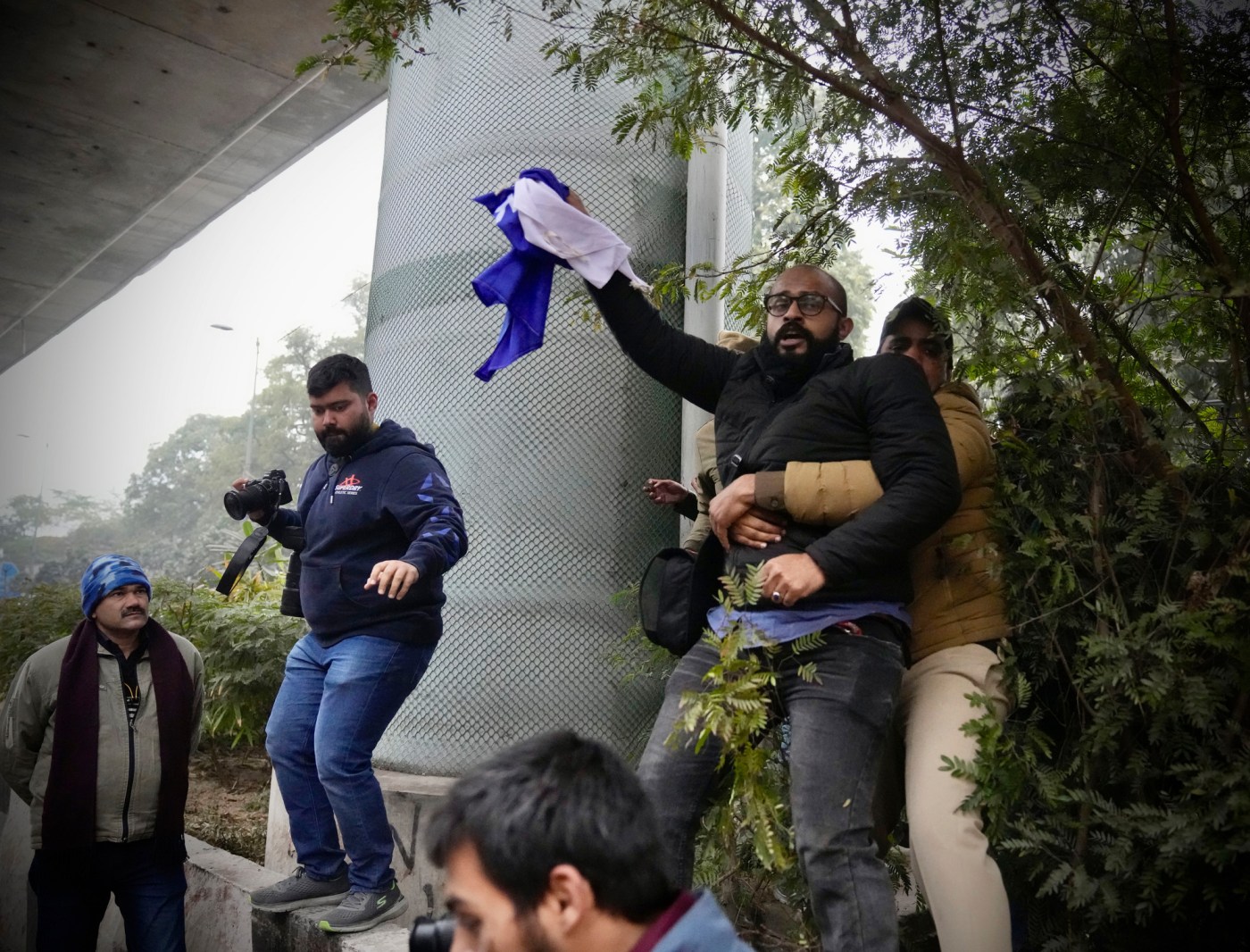 NEW DELHI — Days after India blocked a BBC documentary that examines Prime Minister Narendra Modi’s role during 2002 anti-Muslim riots and banned people from sharing it online, authorities are scrambling to halt screenings of the program at colleges and universities and restrict clips of it on social media, a move that has been decried by critics as an assault on press freedom.

Tensions escalated in the capital, New Delhi, on Wednesday at Jamia Millia University, where a student group said it planned to screen the banned documentary, prompting dozens of police equipped with tear gas and riot gear to gather outside campus gates.

Police, some in plain clothes, scuffled with protesting students and detained at least half a dozen, who were taken away in a van.

“This is the time for Indian youth to put up the truth which everybody knows. We know what the prime minister is doing to the society,” said Liya Shareef, 20, a geography student and member of the student group Fraternity Movement.

Jawaharlal Nehru University in the capital cut off power and the internet on its campus on Tuesday before the documentary was scheduled to be screened by a students’ union. Authorities said it would disturb peace on campus, but students nonetheless watched the documentary on their laptops and mobile phones after sharing it on messaging services such as Telegram and WhatsApp.

The documentary has caused a storm at other Indian universities too.

Authorities at the University of Hyderabad, in India’s south, began a probe after a student group showed the banned documentary earlier this week. In the southern state of Kerala, workers from Modi’s Bharatiya Janata Party held demonstrations on Tuesday after some student groups affiliated with rival political parties defied the ban and screened the program.

The two-part documentary “India: The Modi Question” has not been broadcast in India by the BBC, but India’s federal government blocked it over the weekend and banned people from sharing clips on social media, citing emergency powers under its information technology laws. Twitter and YouTube complied with the request and removed many links to the documentary.

The first part of the program, released last week by the BBC for its U.K. audiences, revives the most controversial episode of Modi’s political career when he was the chief minister of western Gujarat state in 2002. It focuses on anti-Muslim riots in which more than 1,000 people were killed.

The riots have long hounded Modi because of allegations that authorities under his watch allowed and even encouraged the bloodshed. Modi has denied the accusations, and the Supreme Court has said it found no evidence to prosecute him. Last year, the country’s top court dismissed a petition filed by a Muslim victim questioning Modi’s exoneration.

The first part of the BBC documentary relies on interviews with victims of the riots, journalists and rights activists, who say Modi looked the other way during the riots. It cites, for the first time, a secret British diplomatic investigation that concluded Modi was “directly responsible” for …read more

Plane isn’t just another action thriller. The movie –- which stars Gerard Butler and Mike Colter –- centers on an emergency landing that leaves a pilot (Butler) and his passengers stranded on an island and on a mission of survival. But in a recent interview, Colter confirmed he believes his fandom of a certain controversial […]

The saga of California’s inflation refund is coming to a close even as qualified taxpayers wait for their payments. Gov. Gavin Newsom’s office said last fall that the state would distribute the one-time Middle-Class Tax Refund payments between late October and mid-January. The payments, which range from $200 to $1,050, are aimed at taxpayers who […]