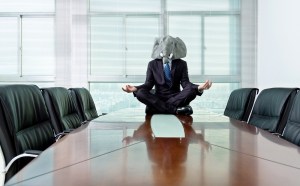 There were no boozy late-night cocktail parties at this weekend’s California Republican Party convention.

Missing too were the bullhorn and placard-toting protest marches, the cameo appearance of rightwing Internet celebrities, the raucus parliamentary brawls between college Republicans. There were no rooms to work, parties to crash, or crowds to whip up. There was no hotel this time — and therefore no hotel lobby in which to peruse that distinct mix of kitsch and politics on display at the vendor kiosks.

Instead – like so much of the color of life since March of last year — the party’s biannual meetup was replaced by a cascade of Zoom meetings. And in cyberspace, it’s much harder to be a rabble rouser — especially if you can’t figure out how to unmute yourself.

Through it all, the party deliberately avoided censuring anyone for voting to impeach President Trump, or revoking the party membership of extremists. It sidestepped the chance to make an early endorsement amid a bid to recall and replace Gov. Gavin Newsom.

“I don’t know what the alternative is under COVID conditions, but we give up a lot by doing it this way,” said Ed Langan, chair of the Calaveras County GOP.

The format was not without its upsides, but all in all, it made for pretty bland stuff — and that’s probably just how the party leadership wanted it.

The goal of the weekend was to put “a management team in place…so that the party is well prepared” for the 2022 election season and a possible recall election later this year, said former party chair Ron Nehring. “The most important stuff is not the sexy stuff.”

No surprise: Jessica Patterson, who has served as chair since 2019, was easily reelected to the job. She ran on the party’s successful retaking of four congressional seats last November, her fundraising prowess and on a series of recent legal victories for the GOP.

She also ran on GOP unity. That meant emphasizing support for the recall of Newsom, whom Patterson called “by far the worst governor in California history,” without any specific endorsement of who ought to take his place. It also included a dislike of “cancel culture” and California’s progressive policies — all while tamping down the intraparty drama.

Nationwide, the GOP is filled with examples of the party starting to rip itself apart. President Trump was just impeached for the second time for his incitement of a violent mob that stormed the national Capitol. Since then Republicans have been riven by censure resolutions and competing accusations of disloyalty and conspiratorial lunacy. In California and elsewhere, many voters have bolted out of the GOP.

But very little of that division or rancor was on display this weekend. Procedure, and Zoom’s moderation and mute function, have their perks.

On Saturday a measure to censure Rep. David Valadao — who just barely reclaimed his San Joaquin Valley Congressional seat and then became the only Californian among 10 House Republicans voting to impeach the president — …read more

By The Associated Press ROME — On the eve of what was supposed to finally be the much-delayed opening of Italy’s ski slopes, the government yanked permission because high circulation of a coronavirus variant. Health Minister Roberto Speranza’s ordinance on Sunday forbidding amateur skiing at least until March 5 effectively kills hopes of ski lift […]

Harry and Meghan responded immediately to an announcement Friday that Queen Elizabeth was taking back patronages and honorary titles “that come with a life of public service,” a year after they stepped away from working for their royal family. In fact, the Duke and Duchess responded within four minutes from their home in California, saying […]

The play by today’s declarer reminds me of an old dictionary that had pages torn out in both the front and back: It went from bad to worse. South’s leap to four spades was bold. He ruffed the second heart, drew trumps and took the ace, king and queen of clubs. If the jack had […]