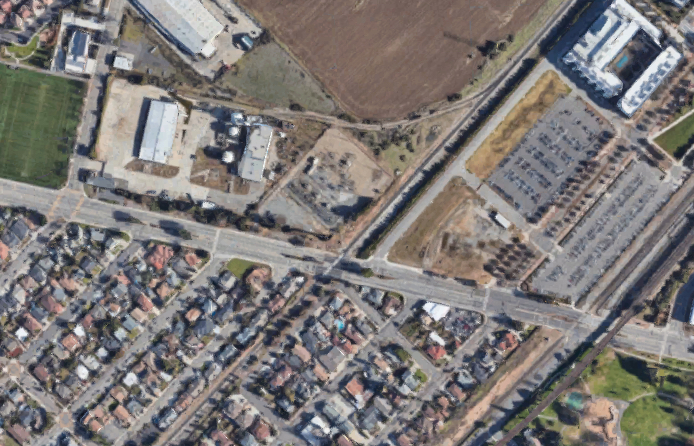 UNION CITY — Almost 1,000 apartments and condominiums will be built near BART’s Union City Station after the the City Council this week approved the big development.

The project by Newport Beach-based developer Integral Communities also will feature nearly 31,000 square feet of ground floor commercial space that could include a grocery store.

The project will be built on 26.5 acres bounded by Decoto Road to the north, 7th Street to the east, Bradford Way to the south and Union Pacific Railroad lines to the west. It will also include three community parks, a tot lot, urban plazas and an outdoor amphitheater, according to a city staff report.

The mostly industrial site lies just northeast of BART in a section of town known as the Station District, where the city has been doing toxic cleanups to make way for high-density housing and commercial development.

“I want to commend everyone whose hand has touched this project in one way or another,” Mayor Carol Dutra-Vernaci said at Tuesday’s meeting, adding that it’ll help the city meet its regional housing goals for market-rate and affordable units while also adding some open space to the area.

“It’s helping us build up around the station district, which has been in the works for well over 20 years,” she said.

Integral plans to build 376 apartments, 146 of them below-market rate.

During earlier phases of its review, the council pushed the developer to incorporate affordable units instead of just paying the city in-lieu affordable housing fees.

“From what I’ve seen so far, I’m really pleased with the effort they’ve made to accommodate our questions and our issues and I think this will be a great addition to the Union City community,” Councilwoman Emily Duncan said.

In addition to the apartments, the development will include 490 condominiums and 108 townhouse-style condos, according to the staff report. In all, there’ll be almost three dozen residential buildings ranging between three and five stories high.

To allow the project, the council approved several policy changes such as amending the general plan to slightly lower the minimum residential density limit in the area while slightly raising the average density overall.

City staff has previously said the adjustments were needed to give the developer enough flexibility to build a mix of housing types.

Rebecca Davis, an attorney for the law firm Lozeau Drury, representing Laborers International Union of North America and its local union 304 based in Hayward, opposed the project. She said the environmental impact report the city commissioned was inadequate in a few key areas, such as its assessment of impacts on wildlife and cancer risks to people in nearby buildings.

The city has pushed back at multiple meetings, stating that the project’s impacts have been thoroughly vetted and the report complies with all current state and regional laws.

Leslie Carmichael, a planner assigned to the project, told the council the developer could start demolishing the industrial buildings as soon as later this year or in early 2022. The new development would be phased in over about four and a half years, and when complete …read more

OAKLAND – Oakland A’s starter Sean Manaea was about to throw his 100th pitch of Wednesday’s game with the Arizona Diamondbacks when he faced Eduardo Escobar with two runners on no outs in the top of the sixth inning. After a mound visit from A’s pitching coach Scott Emerson, Manaea then threw four straight sinkers […]