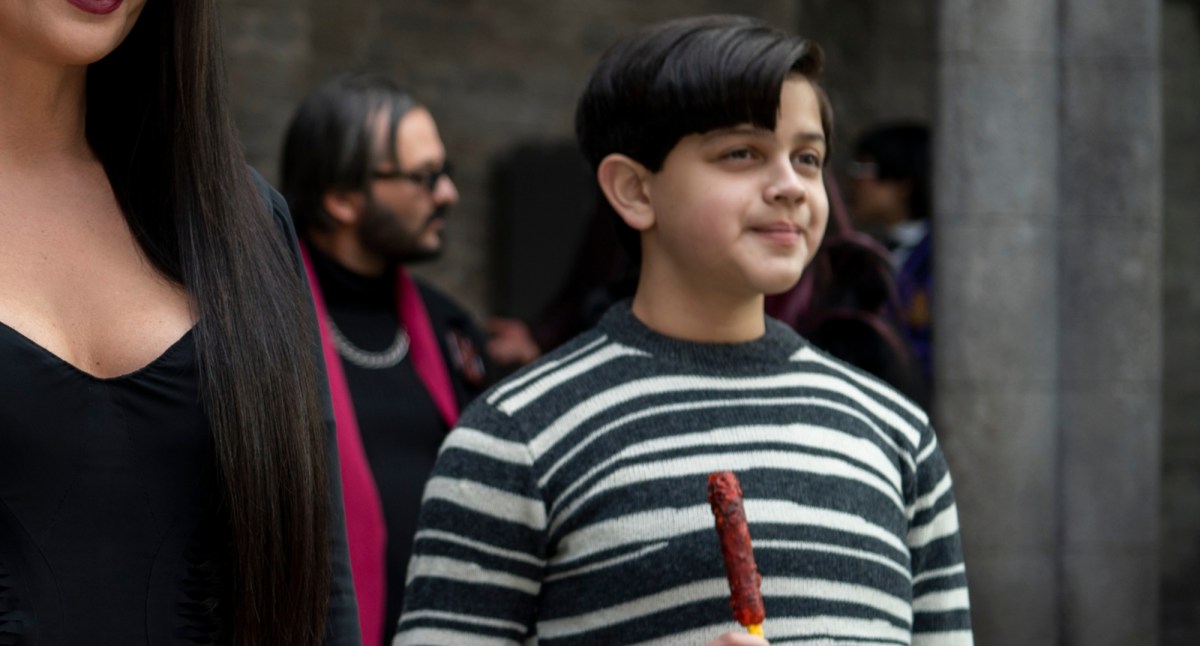 Not only is Tim Burton’s Netflix series Wednesday introducing a version of the goth teen fans have never seen before, but a Latin version. Leading actor Jenna Ortega explained her version of Wednesday is “technically Latina.” Fans will find Wednesday has many subtle references to Latin culture, from Mexica ancestry, classic music, and Pugsley (Isaac Ordonez) enjoying a well-known sweet and spicy treat.

Actor Isaac Ordonez as Pugsley in ‘Wednesday’ | via Netflix

Wednesday takes on a more cartoon-accurate version of the macabre family. Ortega was right when explaining the Netflix series adds a more Latin spin to the character and her family. But the series does not make obvious examples, but smooth, subtle ones that fans have to keep an eye on. In the first episode, Morticia (Catherine Zeta-Jones) warns her daughter not to escape from nevermore. But she gives her a parting gift, a necklace. The necklace is a “W” that can be turned into an “M.”

The necklace is tied to Latin culture, as Morticia explains, ” It’s made of obsidian, which Aztec priest used to conjure visions.” According to World History, obsidian was extensively used by Mesoamericans and Aztecs to make tools, weapons, and mirrors and has some connections to gods.

Fans will get various examples of Latin culture with the music Wednesday likes to listen to. Not privy to modern technology, she uses an old-fashioned megaphone player. In the first episode, she listens to a sad version of “La Llorona.” It is a common Mexican folk song derived from a legend.

Audiences might have missed the one small nod to Latin culture in Wednesday Episode 4. While at the Rave’N dance, Wednesday lets loose and has fun dancing. But by man means, Wednesday’s dance style is unique and incorporated different styles. But in a tiny instant, Wednesday dances a bit of flamenco. The popular dance has origins in gypsies of Southern Spain.

The Latin influences in the Netflix series do not end there. In the fifth episode, Wednesday dives deeper into the mystery that plagued her parents 25 years ago. After her father is arrested, she seeks her mother for the truth. In the Nightshades lair, Morticia reveals that the club used to be much more. It was initially started by Gomez’s (Luis Guzman) ancestor from Mexico. The ancestor is Goody Addams, one of the first settlers in America.

RELATED: ‘Wednesday’ Review: A Supernaturally Haunting yet Welcome Change to the Wednesday Addams Fans Grew up With

But fans may notice another Latin example at the beginning of the episode. When the Addams family arrives at Nevermore for parents’ weekend, Pugsley is munching on a …read more

In-N-Out Burger has a new ugly sweater in its merchandise shop that wishes people an Animal Style Christmas. The garment is black with green trim. Its front depicts cartoon french fries trimming a Christmas tree in In-N-Out ornaments on a snowy night. The tree’s bows are dripping with In-N-Out spread, the condiment it puts on […]

An expert analyzed Prince Harry and Meghan Markle’s body language in a new video, pointing out how “cute” they appear as a couple. Harry and Meghan delivered a message to Elton John, with the Duchess of Sussex putting her head on Harry’s shoulder, blowing a kiss, and waving at the end of the clip. Meghan […]