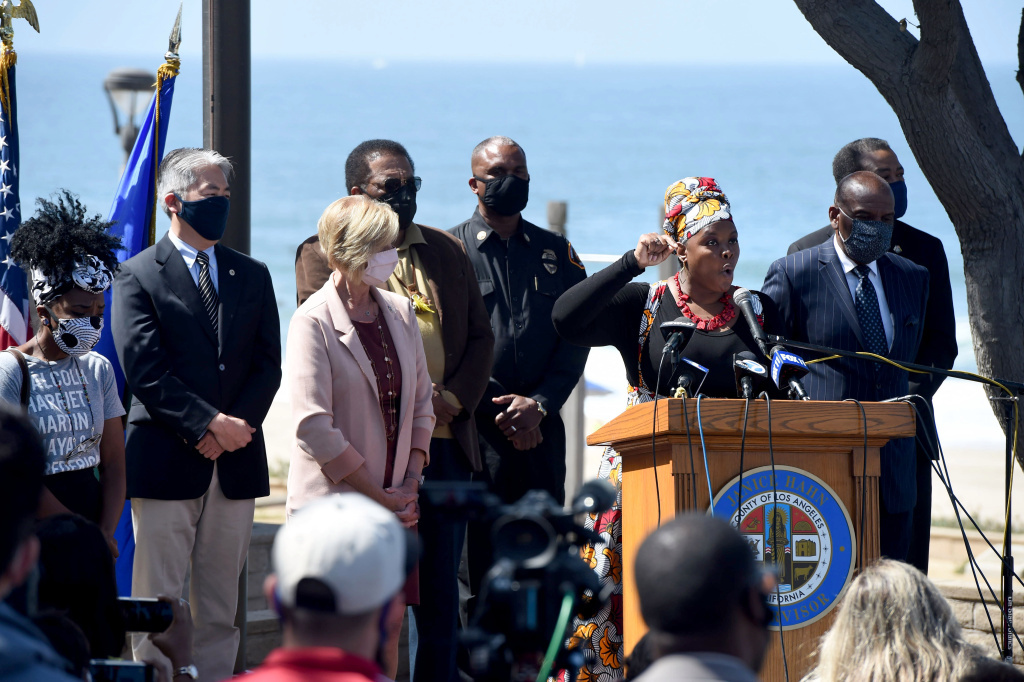 Kavon Ward, a Manhattan Beach activist, was getting her 4-year-old ready for a bath when she heard the news:

A state bill that would pave the way for Los Angeles County to return two parcels of oceanfront land in Manhattan Beach to the descendants of the original Black owners was on its way to Gov. Gavin Newsom for his signature.

“I stared crying and crying like a baby,” Ward said in an interview on Friday, Sept. 10, a day after the state Senate OK’d the bill. “I was reeling.”

Ward was one of the key figures in an ongoing movement to get justice for Willa and Charles Bruce, who owned and operated a seaside lodge for African Americans during the early part of the 20th century, a time when Black people had limited access to the coast. But then Manhattan Beach leaders at the time used eminent domain to take their property.

The city eventually gave those two parcels to the state, which decades later transferred it to the county. The latter transfer agreement prohibited the county from giving or selling the land to anyone else — which is why the state bill was needed.

Manhattan Beach, meanwhile, still owns a much larger chunk of land it also took over via eminent domain. That land eventually became a park. The area is now named Bruce’s Beach Park.

Ward, Bruce family representative Duane Shepard, county Supervisor Janice Hahn and state Sen. Steven Bradford were among the most influential people in the effort to return the land, which officials say is a first-in-the-nation initiative.

But how did Bruce’s Beach Lodge — the former seaside resort — and its owners go from a footnote in Manhattan Beach history to the subjects of national headlines and, ultimately, a joint state-and-county effort to make amends?

The genesis of the Bruce’s Beach movement began amid a national reckoning on police brutality and systemic racism.

Ward, like thousands of others across the country, became incensed she saw the video last year of George Floyd, a Black man, being killed by a white police officer in Minneapolis who kneeled on his neck.

A wave of protests took over the country, including in LA County. Even areas with relatively small Black populations saw protesters gather — such as Manhattan Beach.

Ward, who is Black, formed a since-disbanded group composed of moms advocating anti-racism. It was during that period that she learned, through blog posts, about the history of Bruce’s Beach for the first time.

“This happened in the community that I lived in?” Ward asked herself. “How is this OK? I wonder how many other people don’t know about this.”

The answer, it turned out, was a lot.

“I am embarrassed to admit that I did not know the story of Bruce’s Beach until very recently,” Hahn said on Friday. “It was not until the Black Lives Matter movement last summer and the Justice for Bruce’s Beach demonstrations that I began to understand the history and the injustice of what happened.”

‘I Love Lucy’: Lucille Ball Didn’t Credit George Reeves as Superman Because of Her Children

Lucille Ball found herself face-to-face with Superman in a crossover episode of I Love Lucy. But George Reeves, the actor who played the man of steel, wasn’t credited for his part. Why? Because Ball didn’t want her children to realize the superhero wasn’t real.   Lucy Ricardo wanted Superman at her son’s birthday party in ‘I […]