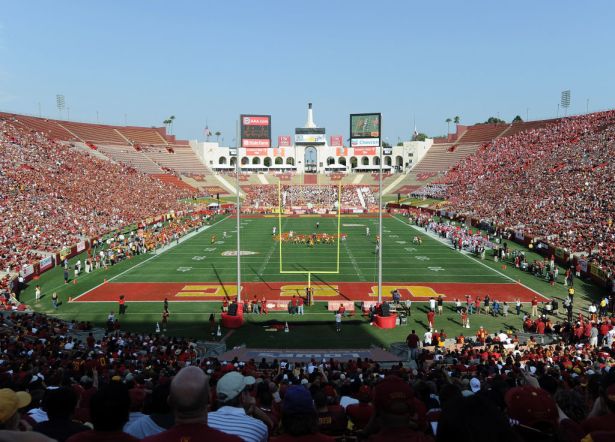 *** The Pac-12 Hotline newsletter is published each Monday-Wednesday-Friday during the college sports season and twice-a-week in the summer. (Sign up here for a free subscription.) This edition, from Oct. 6, has been made available in archived form.

First came the vote to play; then came the revised schedule; and now, naturally, come the wagering options.

BetOnline.ag has released regular-season win totals for each Pac-12 team in the upcoming, seven-game regular season.

Our team-by-team projections will be published later this month, but the Hotline couldn’t resist a bit of fun with the BetOnline totals.

1. Push = we agree with the projection and would not place a wager on the bet we’re not actually placing a wager on.

2. BetOnline totals account for the crossover matchups on championship weekend but not the outcome of bowl games.

Arizona
Crossover game: at Washington
Win total: 1
Our pick: Push
Comment: The rugged start will frame what might be Kevin Sumlin’s third and final season.

Arizona State
Crossover game: vs. Cal
Win total: 4.5
Our pick: Over
Comment: Toughest games are the first two: USC and Cal. Split those, and the Devils are well set.

Cal
Crossover game: at Arizona State
Win total: 4.5
Our pick: Over
Comment: Continuity is key after the disrupted offseason, and Cal has plenty of it, everywhere.

Oregon
Crossover game: vs. UCLA
Win total: 6
Our pick: Under
Comment: Over doesn’t carry enough margin for error. We considered a Push, however.

Stanford
Crossover game: vs. Colorado
Win total: 3.5
Our pick: Under
Comment: The even-year schedule features Oregon, Cal and Washington on the road.

UCLA
Crossover game: at Oregon
Win total: 3.5
Our pick: Under
Comment: Multiple upsets would be required for the Bruins to win four. Tough to envision.

USC
Crossover game: vs. Washington State
Win total: 5.5
Our pick: Over
Comment: Beat either ASU (home) or Utah (road), and the Over moves well within reach

Utah
Crossover game: vs. Oregon State
Win total: 4.5
Our pick: Over
Comment: The seventh game (on championship weekend) will be the key to the fifth win.

Washington
Crossover game: vs. Arizona
Win total: 4.5
Our pick: Under
Comment: With Cal and Oregon on the road, the Huskies have no margin for error on the Over.

Here’s the link to the BetOnline site, if you’re interested in the money totals assigned to the Over/Under. — Jon Wilner

Hot off the Hotline

The content production slowed a bit in the past week, as the Hotline took a few days off to recover from the Aug.-Sept. push and to rest up for a furious next six months. (December alone is going to be ridiculous.)

• However, we published an analysis of the Pac-12 schedule on Saturday morning with context from Merton Hanks, the Pac-12’s new football operations chief. If you’re wondering why USC and Oregon won’t meet in a crossover matchup — or how the TV selection process …read more

California’s daily average death count has dropped to its lowest point in more than three months, signaling that the mid-summer’s wave of infections is finally over — even as coronavirus infections spread unevenly yet again across the state. As of Friday, California’s seven-day daily death average hit 61, putting the state back on par with […]

As 2020 winds down, independent Bay Area movie theaters continue to struggle with the impact of COVID-19 closures. The loss of studio blockbusters from the holiday release calendar, along with continued concerns about safety and other issues, has made it unlikely that these theaters will open any time soon. But when it comes to riding […]

BERKELEY — Both incumbents of Berkeley City Council’s Districts 5 and 6 face challengers who are questioning their leadership roles, including on fire safety and past voting on police-related issues. In District 5, incumbent Sophie Hahn’s district, her challengers are realtor Todd Andrews and community center organizer Paul Darwin Picklesimer. In District 6, incumbent Susan […]