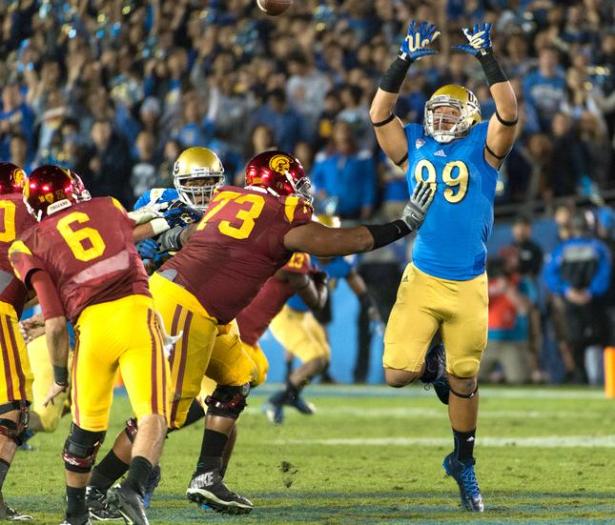 *** The Pac-12 Hotline newsletter is published each Monday-Wednesday-Friday during the college sports season and twice-a-week in the summer. (Sign up here for a free subscription.) This edition, from Oct. 9, has been made available in archived form.

Larry Scott on Criticism: “Goes with the territory”

The latest has washed ashore over the past two months, with layoffs and furloughs at the conference office, executive bonuses that were paid before the staff downsizing, the expenses incurred in San Francisco and the absence of football on the Pac-12 Networks.

Earlier this week, Scott appeared on the Bickley and Marotta radio show on Arizona Sports 98.7 for an informative, candid conversation that touched on all the touchy touch points.

I’d encourage everyone to listen to the full 15 minutes — the first half focuses on the football season — but here are a few relevant snippets.

• Whether the Pac-12 is wasteful with executive bonuses and rent paid in San Francisco:

“We’re also based in San Francisco. That decision to be in the Bay Area certainly preceded me.”

“We have a rigorous process we go through with our finance committee, which is made up of university presidents and university chief financial officers, and I’m very confident that we’re pursuing the mission and the mandate on behalf our members at a high level in an efficient way.”

• The potential for his tenure to end and whether he has lost the support of the presidents:

“It’s achieved a lot of what its objectives were … It has not reached its full potential, for sure, in terms of distribution. I know the DirecTV issue has been a huge irritant for fans that have it and weren’t willing to switch to the several other networks in every market that have (the Pac-12 Networks).”

“Sure, there are things we could have done differently. We might have made different tradeoffs, but certainly, there have been a lot of benefits our members have gotten by having the network, and what we’ll see in 2024″ — when the new media contract begins — “is the wisdom of keeping our rights and owning and controlling it ourselves and being able to adapt to a rapidly changing media landscape.”

* How he can elevate the conference’s reputation:

“The most important is that we have teams that win.”

California has prepared an unprecedented vaccination campaign against the COVID-19 virus, according to a plan submitted to federal authorities on Friday, a major step along the Golden State’s roadmap to protect 40 million residents from the deadly disease. That plan, while not yet made public, specifies who will first get the vaccine, where it will […]

Kurtenbach: The NFL needs a bubble

The Deets is a weekday morning dose of commentary — delivered at 7 a.m. — from sports columnist Dieter Kurtenbach that wraps up everything important in the world of sports and looks forward to another crazy day ahead. I know the NFL wants to expand its footprint. They play games on Thursday, Saturday, Sunday, and […]