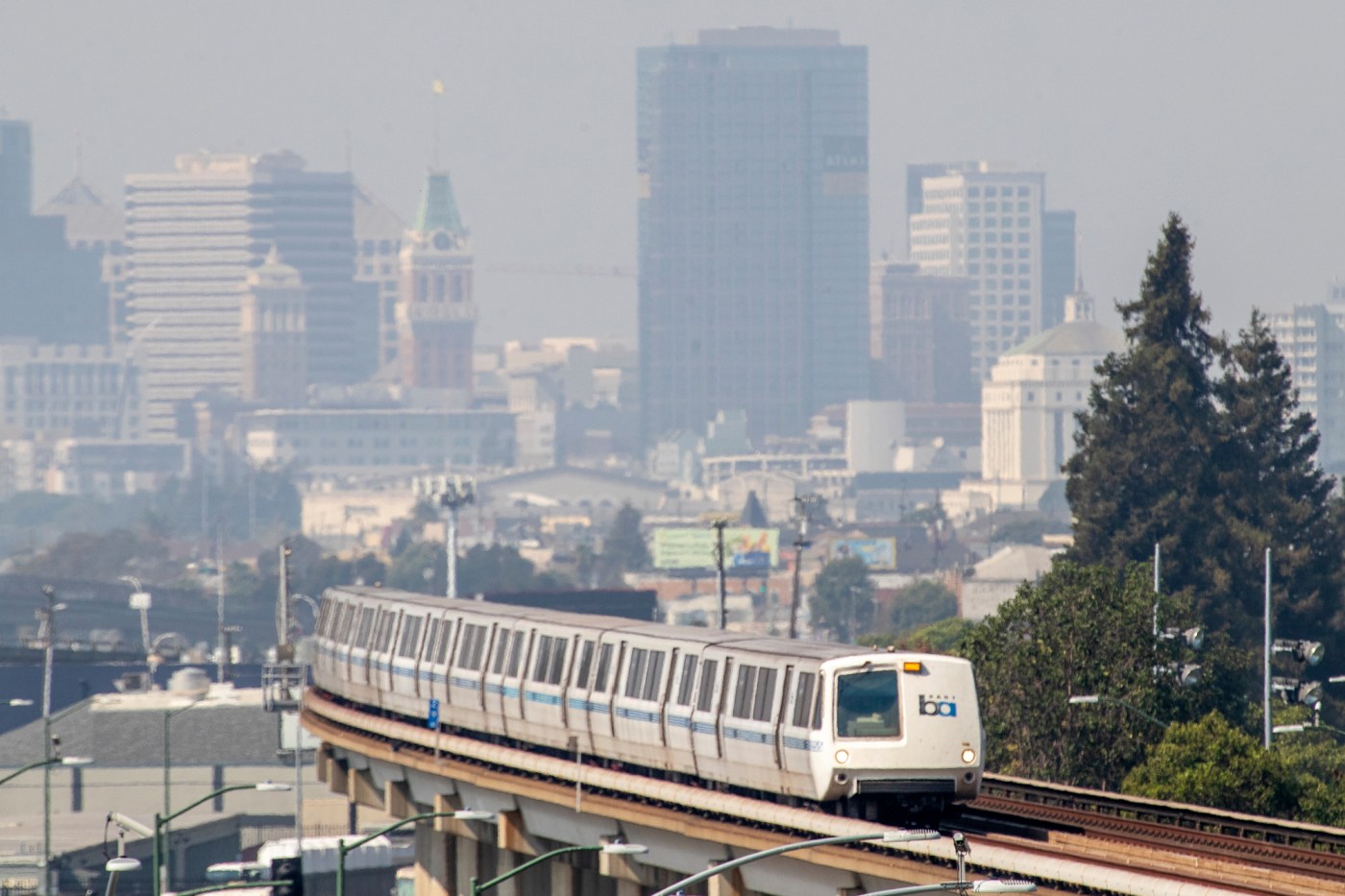 The increasing sun and warmth that replaced the stormy and chilly weather that preceded it has given rise to another another element  that’s not unusual in the Bay Area.

“It is quite hazy out there,” spokesman Aaron Richardson of the Bay Area Air Quality Management District said Thursday. “The rain storms really cleared things out. Now, we have that high pressure and an inversion, and the cooler air is staying close to the ground, and that’s trapping pollution.

“What we’re getting is really not untypical for this time of year.”

That said, the unclean air wasn’t so dirty for a Spare the Air alert. Air-quality readings by the air district showed the fine particulate matter through the region was moderately healthy for everyone with measurements between 51-100 at 1:30 p.m. Richardson said the readings are based on 24-hour models.

The air quality reading in East Oakland was at 104 and in Redwood City it reached 132. Anything between 101-150 is considered unhealthy for people with respiratory issues.

Readings on Purple Air, a company that measures air-quality in 10-minute increments, showed readings in the Santa Clara Valley as high as 154 at 3 p.m.

“The pollution doesn’t have anywhere to go. It hasn’t been windy, it’s been stagnant,” Richardson said. “When there’s not a storm system coming through, we often see this kind of air quality.”

Weather forecasters at the National Weather Service said there are no foreseeable storms on the horizon but that relief for the hazy air is coming.

“We will see some stronger winds develop (Thursday) night into Friday,” NWS meteorologist Matt Mehle said. “That should help. The more the wind kicks up, the more of the particulate matter it will take with it.”

The off-shore winds will blow northeasterly — a perfect recipe for fire danger if not for the recent wet weather, Mehle said — and will blow stronger at higher elevations.

“These are fall-like winds,” he said. “It’s just that they’re here in the winter.”

The winds also will help the inversion layer of high pressure to break up a bit. The inversion layer, which forecasters also call a “lid” was between 3,000 and 4,000 feet Thursday, Mehle said.

Here’s where (and how) you are most likely to catch COVID, according to a new study

“Hopefully, we can hold onto those breezy conditions through the weekend,” he said.

Forecasters also are keeping an eye on a low-pressure system that’s been stagnant in the southern Pacific that could start to move and bring rain to Southern California by the weekend. Mehle said remnants of that storm could reach as far north as Monterey by Sunday night.

‘Survivor’ Host Jeff Probst Reveals He Never Looks at the Jury’s Votes Before Reading Them at the Finale, Except in Season 41

Jeff Probst | Photo by Robert Voets/CBS via Getty Images Jeff Probst surprised the castaways during the ‘Survivor’ Season 41 finale Due to the coronavirus (COVID-19) pandemic, the Survivor producers weren’t sure that they would be able to have an in-person finale for season 41. So, instead, they decided to read the jury’s votes in […]

Kim Kardashian West and North West | Marc Piasecki/Getty Images She is dealing with four different personalities, and in addition to her busy work schedule, she goes out of her way to make as much time as possible for her children. Now, the reality star and aspiring attorney admits that she is even more intimidated […]

‘Encanto’: Why Lin-Manuel Miranda Intentionally Wrote Mirabel’s Song ‘Out of Beat’ With the Rest of the Family

Being different is cool — unless you’re the only person in your family without magical powers. Even Mirabel’s solo song, “Waiting on a Miracle,” from Encanto, was written “out of beat” from the rest of the characters in this Disney movie.  Here’s what Lin-Manuel Miranda said about the intentional differences he added while composing “Waiting […]