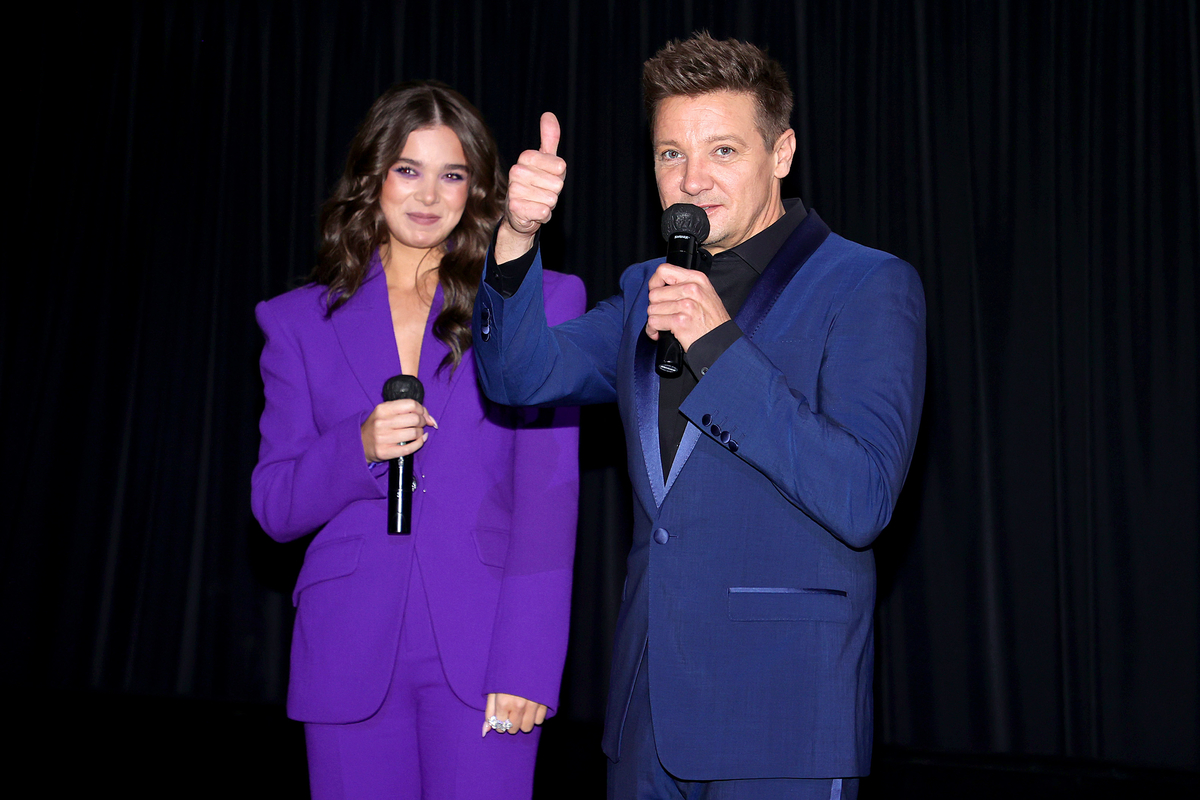 Filming never has a straightforward process. Actors laugh and goof off in many behind-the-scenes clips and

Fans know the ins and outs of their favorite franchises, sometimes more than the actors portraying the characters. Hawkeye stars Jeremy Renner and Hailee Steinfeld took a Marvel quiz online to see how much they knew. However, the two could barely introduce what the video was about without giggling and breaking out in laughter.

Filming never has a straightforward process. Actors laugh and goof off in many behind-the-scenes clips and gag reels.

However, even edited down, the Hawkeye stars Renner and Steinfeld laughed and cracked for nearly a full half minute.

“We’re never going to make it through this quiz,” Steinfeld laughed between breaths.

my new comfort video is this 41 second clip of hailee steinfeld laughing hysterically at jeremy renner while trying to introduce the marvel trivia quiz we had them take pic.twitter.com/ADTJDAF46s

Renner could hardly say, “Hi, I’m Jeremy Renner, and I play Hawkeye,” without Steinfeld or himself breaking into hysterics. The two tried to compose themselves several times, only to laugh again.

“Relax, you’ve got to get your head in place,” Renner told Steinfeld, despite laughing just as much as she did.

However, they eventually managed to hold themselves together long enough to start with the first Captain America question.

When someone spends even a few moments online, they come across Marvel quizzes and ‘test your knowledge’ challenges. Hawkeye and Kate Bishop, played by Renner and Steinfeld, decided to take one of these quizzes.

They answered ten questions from Buzzfeed on various movies from the Marvel Cinematic Universe. Some asked about Black Widow’s key moments, while some focused on Stan Lee’s cameos.

However, the Marvel heroes managed to put up a decent score, answering around 80% of the questions correctly.

Among the 20% the Marvel archers missed in the quiz, Renner answered questions wrong about scenes he filmed in the Avengers sequels, however.

The ‘Hawkeye’ actor answered questions wrong for scenes he filmed

While it seems like Hawkeye star Renner would struggle to answer trivia for movies he did not star in, he actually missed answers for scenes in which he appeared. He tried to remember Natasha Romanov’s final words and recalled them at the last moment.

The Marvel quiz then asked who first tried to lift Thor’s hammer in a question about Avengers: Age of Ultron.

Renner struggled to remember the scene. He reasoned that Tony Stark sounded like he would try to lift Thor’s hammer first. However, Steinfeld’s jaw dropped.

“Wrong!” Steinfeld read. “Clint Barton makes fun of Thor’s hammer and then is the first person to try and lift it.”

“Hey, you don’t have to push it,” Renner said, laughing again.

Robin Williams | Vera Anderson/WireImage It’s no secret that Robin Williams had always been orbiting the Batman universe in one way or another. He was first tapped to play the Joker in Tim Burton’s Batman, but plans later fell through. “It happens,” Williams said in an interview posted by the Robin Williams is seen by […]

‘The Blacklist’ Actor James Spader Was Once Called ‘The Strangest Man Alive’ by Rolling Stone Magazine, Here’s Why

James Spader as Raymond ‘Red’ Reddington | Will Hart/NBC/NBCU Photo Bank via Getty Images James Spader plays Red in ‘The Blacklist’ The Blacklist, For nine seasons, James Spader has played Raymond “Red” Reddington in The Blacklist. And throughout all of those episodes, his character has remained entangled in darkness and mystery. Apparently, in real life, […]