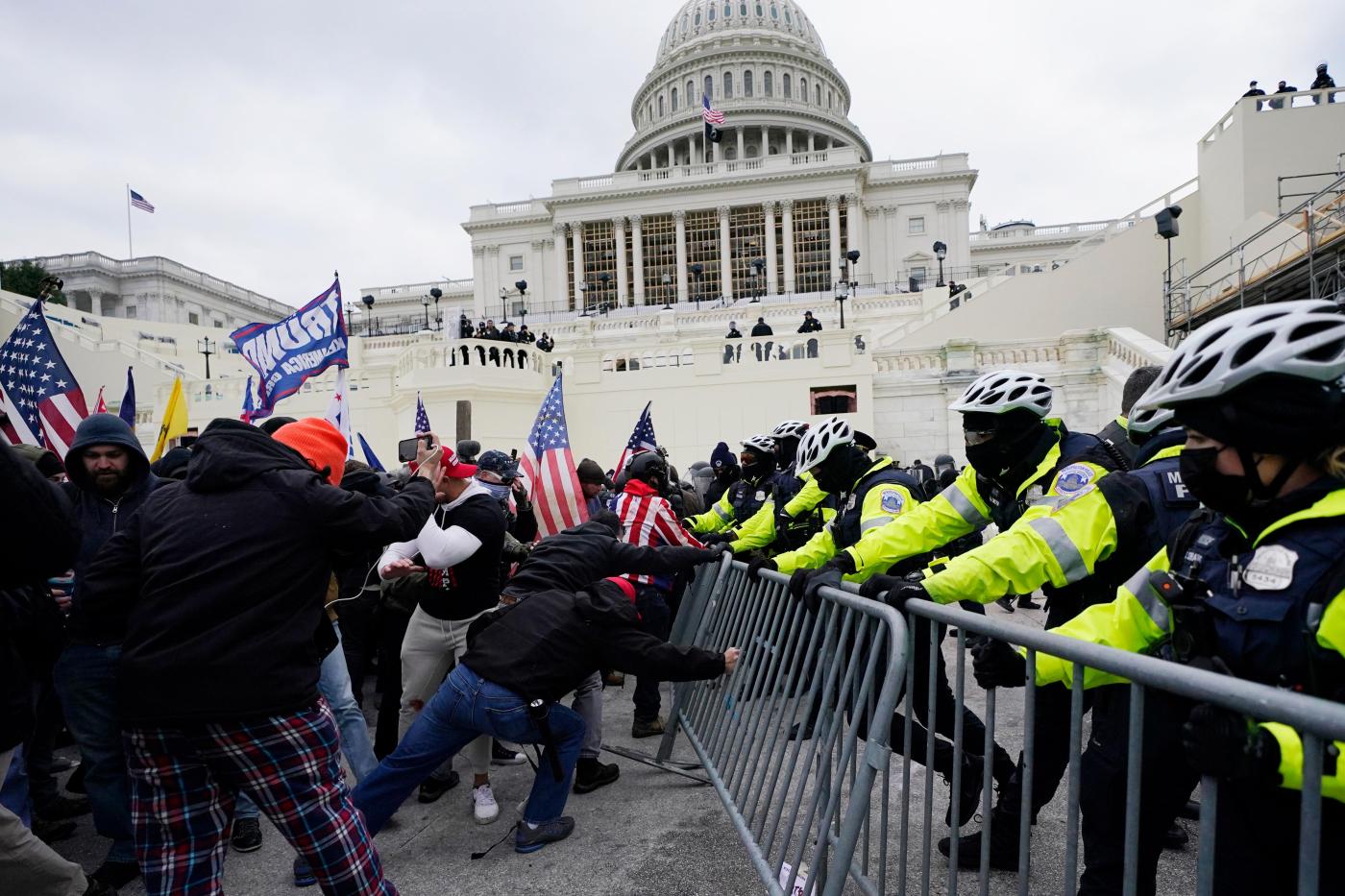 WASHINGTON  — Under battle flags bearing Donald Trump’s name, the Capitol’s attackers pinned a bloodied police officer in a doorway, his twisted face and screams captured on video. They mortally wounded another officer with a blunt weapon and body-slammed a third over a railing into the crowd.

“Hang Mike Pence!” the insurrectionists chanted as they pressed inside, beating police with pipes. They demanded House Speaker Nancy Pelosi’s whereabouts, too. They hunted any and all lawmakers: “Where are they?” Outside, makeshift gallows stood, complete with sturdy wooden steps and the noose. Guns and pipe bombs had been stashed in the vicinity.

Only days later is the extent of the danger from one of the darkest episodes in American democracy coming into focus. The sinister nature of the assault has become evident, betraying the crowd as a force determined to occupy the inner sanctums of Congress and run down leaders — Trump’s vice president and the Democratic House speaker among them.

This was not just a collection of Trump supporters with MAGA bling caught up in a wave.

That revelation came in real time to Rep. Jim McGovern, D-Mass., who briefly took over proceedings in the House chamber as the mob closed in Wednesday and Pelosi was spirited to safer quarters moments before everything went haywire.

“I saw this crowd of people banging on that glass screaming,” McGovern told The Associated Press on Sunday. “Looking at their faces, it occurred to me, these aren’t protesters. These are people who want to do harm.”

“What I saw in front of me,” he said, “was basically home-grown fascism, out of control.”

Pelosi said Sunday “the evidence is that it was a well-planned, organized group with leadership and guidance and direction. And the direction was to go get people.” She did not elaborate on that point in a ”60 Minutes” interview on CBS.

The scenes of rage, violence and agony are so vast that the whole of it may still be beyond comprehension. But with countless smartphone videos emerging from the scene, much of it from gloating insurrectionists themselves, and more lawmakers recounting the chaos that was around them, the contours of the uprising are increasingly coming into relief.

The mob got stirring encouragement from Trump and more explicit marching orders from the president’s men.

“Fight like hell,” Trump exhorted his partisans at the staging rally. “Let’s have trial by combat,” implored his lawyer, Rudy Giuliani, whose attempt to throw out election results in trial by courtroom failed. It’s time to “start taking down names and kicking ass,” said Republican Rep. Mo Brooks of Alabama.

Criminals pardoned by Trump, among them Roger Stone and Michael Flynn, came forward at rallies on the eve of the attack to tell the crowds they were fighting a battle between good and evil. On Capitol Hill, Republican Sen. Josh Hawley of Missouri gave a clenched-fist salute to the hordes outside the Capitol as he pulled up to press his challenge of the election results.

The crowd was pumped. Until …read more

By Lisa Marie Pane and Patty Nieberg | Associated Press The U.S. is entering the second month of the biggest vaccination drive in history with a major expansion of the campaign, opening football stadiums, major league ballparks, fairgrounds and convention centers to inoculate a larger and more diverse pool of people. After a frustratingly slow […]

Linebacker Patrick Willis and defensive lineman Bryant Young won’t make the next Pro Football Hall of Fame class, and the 49ers legends didn’t even reach the finalist stage that was unveiled Tuesday. Last fall, they were named semifinalists for a second straight year, with Willis in his second year of eligibility. Young was a first-time […]