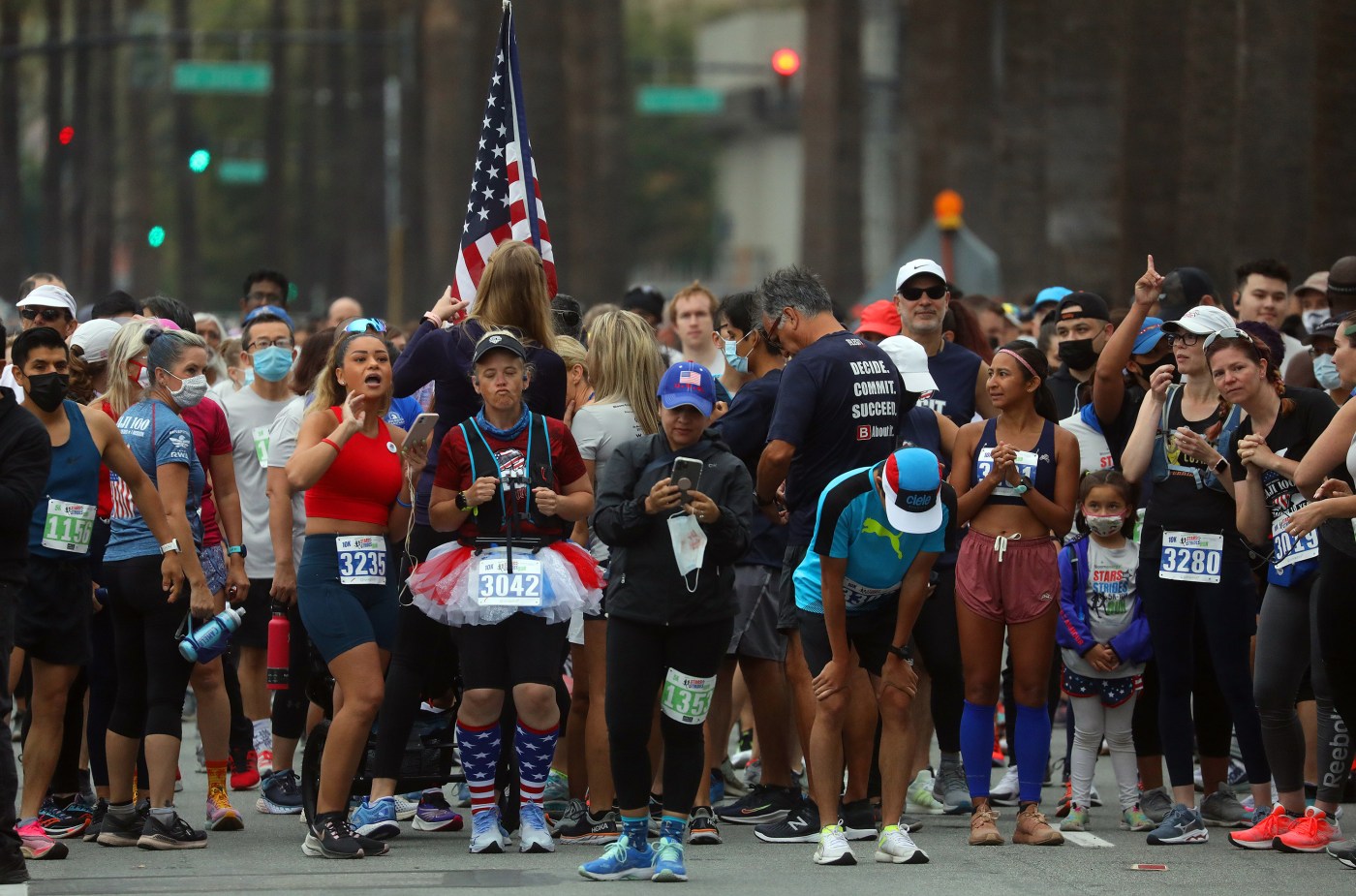 I can’t wait to see Uncle Sam in a pair of Nikes or maybe a Statue of Liberty strolling through downtown San Jose at Bloom Energy’s Stars and Strides run on July 2. After a successful inaugural event last year, organizers have added to the fun with a costume contest for the second edition — and as it takes place over the Independence Day holiday weekend, the theme was obvious.

And there’s a good incentive for getting dressed up, too: Alaska Airlines is providing two round-trip tickets for the best Independence Day themed costume; plus two more round-trip tickets for the best non-Independence Day themed costume. Either way, a lot of costumes will add to the spectacle of the run and walk, which raises money for the Valley Medical Center Foundation.

Everything starts and ends at the Guadalupe River Park’s Discovery Meadow, which will be the site of a post-race festival and a kids’ fun run

Bloom Energy Executive Vice President Carl Guardino — who founded the race (along with the Silicon Valley Turkey Trot, the Santa Run and the Heart & Soles Run) — says that after last year’s initial event zoomed past its $250,000 fundraising goal, the bar has been set higher this year at $350,000. Whether you’re dressing up or not, you can still register for the race at www.starsandstridesrun.com.

FOLLOWING IN MOM’S FOOTSTEPS: Last month, I wrote about Dr. Kamakshi Zeidler’s medical practice Aesthetx in Campbell and her plan to donate about $20,000 of stockpiled medical supplies to the San Jose-based grassroots organization Hearts for Ukraine to distribute in the war-torn nation. Well, Zeidler’s 7-year-old son, Zane, had something to add to the donations of IV fluids and surgical supplies that were packed up last weekend.

He had rallied classmates at his Los Gatos school to create about 50 drawings and notes of encouragement that were added to the care packages. I’m sure those “Hugs for Ukraine” will help heal in their own way. You can find out more about Hearts for Ukraine’s efforts at www.heartsforukraine.us.

UP ON THE ROOF: When San Jose State took over management of the Hammer Theatre Center,  a reception was held to welcome then-new Executive Director Chris Burrill on the second-floor outdoor terrace of the downtown San Jose venue. It has since been noted by many, including Burrill, that the terrace was an underutilized resource.

That’s changing with the new Sunset Series kicking off July 1 with the colorful jazz and swing sounds of Svetlana & the New York Collective. The series continues every other Friday into September, with all shows starting at 8 p.m. at the Hammer, 101 Paseo de San Antonio. You can check out the lineup and purchase tickets at www.hammertheatre.com.

MISSION CONTROL: There’s a new face at Mission College in Santa Clara with the appointment of Seher Awan as the community college’s new president. Her job starts in August after being given the official stamp of approval by the West Valley-Mission Community College Board of Trustees …read more

Noah Schnapp as Will Byers | Netflix Fans think Will’s painting for Mike holds a clue about his sexual orientation Stranger Things fans have been questioning if Will Byers (Noah Schnapp) is gay or not since the show began. That’s probably because the Brothers Duffer, Matt and Ross, have been leaving breadcrumbs hinting at Will’s sexuality […]

One is a beloved children’s movie. The other is a bloody post-apocalyptic sci fi film. Yet Gene Wilder in Willy Wonka & the Chocolate Factory and Chris Evans in Snowpiercer might have more in common than it seems. A fan theory explains how Bong Joon Ho’s 2013 movie is the long-lost sequel to Wilder’s wildly […]

A man who was fatally shot in Fresno, reportedly during an argument over parenting, was a member of a standout football family including former 49er Tim McDonald. William “Billy” Wright. (Fresno Police Department)  William “Billy” Wright, 31, was pronounced dead Wednesday afternoon at a Fresno hospital, police said. The suspected killer is his father, also […]