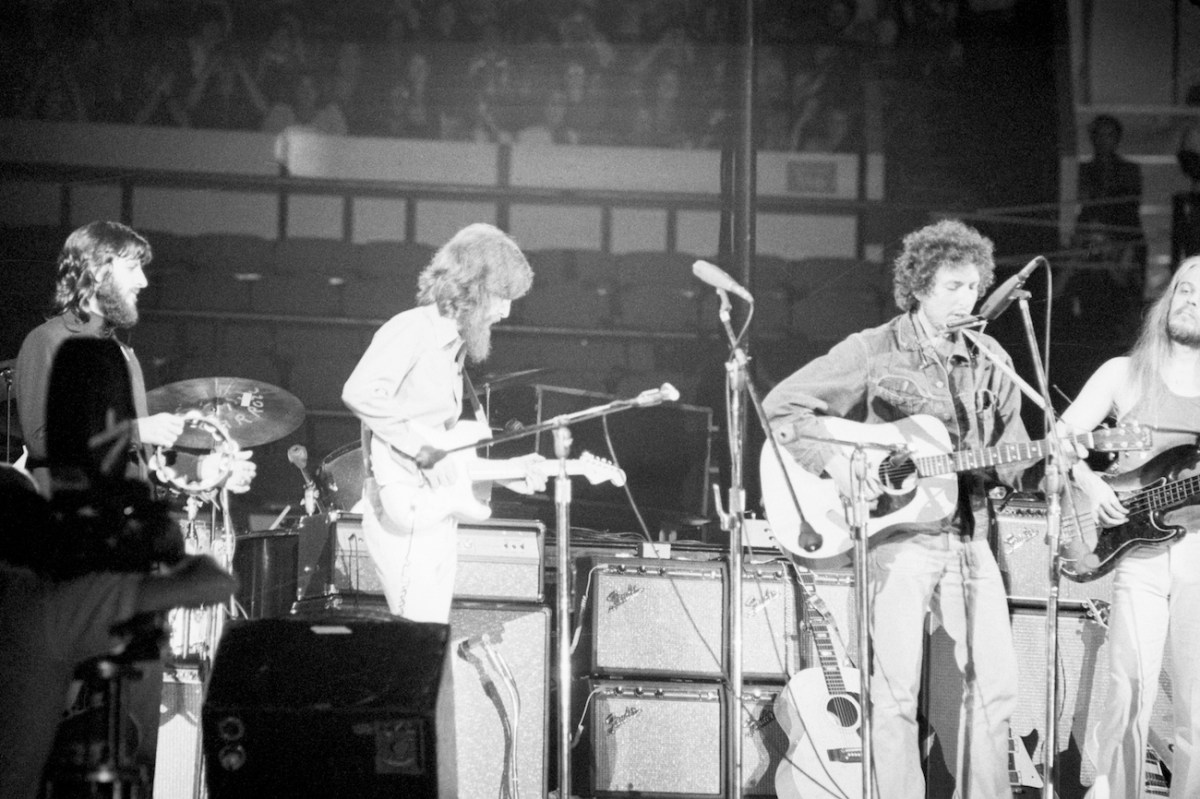 In the early 1960s, George and Dylan became fans of each other. They met in 1964, and Dylan’s Blonde on Blonde was the only record George brought with him to India in 1966.

George Harrison thought it was good that Bob Dylan took a break from music in the late 1960s. When the Beatle visited his friend in 1968, Dylan had already been in his self-imposed exile for years. Dylan appeared different, but underneath, he was doing what he wanted.

In the early 1960s, George and Dylan became fans of each other. They met in 1964, and Dylan’s Blonde on Blonde was the only record George brought with him to India in 1966.

George attended many of Dylan’s concerts. He was amazed at everything the singer/songwriter did, whether it was folk, rock, or country.

George was present at Dylan’s performance at London’s Royal Albert Hall in May 1965, where Dylan walked on stage with an electric guitar. He was supportive of his friend.

In Here Comes The Sun: The Spiritual And Musical Journey Of George Harrison, Joshua M. Greene wrote that the move prompted boos from fans “who viewed the switch from acoustic as a betrayal of his folk purity.”

He continued, “George called those who walked out of the concert ‘idiots’ and argued ‘it was all still pure Dylan, and he has to find out his own directions. If he felt he wanted electrification, that’s the way he has to do it. Who’s laying down the rules?’

“Dylan had started his career with folk songs and protest music but by 1966 had moved away from pointing fingers at others and begun examining himself,” Greene continued. George was entering a period of self-examination around that time as well.

According to Britannica, Dylan constantly toured in 1965 and 1966, “always playing to sold-out, agitated audiences.” Finally, in 1966, Dylan had had enough.

RELATED: George Harrison Revealed The Beatles Stole a Bit of a Stereos Hit for 1 of Their First Songs

Along with constantly being booed on stage, a 1966 motorcycle accident that resulted in a broken neck made Dylan enter a self-imposed exile. He disappeared for the next two years but slowly started to emerge in early 1968.

George visited Dylan in November, and his friend’s attitude surprised him. During a 1977 interview with Crawdaddy (per George Harrison on George Harrison: Interviews and Encounters), George explained that his friend was unusually quiet and shy when he arrived. He thought it was strange, considering Dylan had always seemed confident. However, playing music got him out of his shell.

“I was with Bob and he’d gone through his broken neck period and was being very quiet, and he’d didn’t have much confidence, anyhow—that’s the feeling I got with him in Woodstock,” George said. “He hardly said a word for a couple of days. Anyway, we finally got the guitars out and it loosened things up a bit.

“I felt somehow very close to him, or something, you know, because he was so great, so heavy, …read more

This Week in the Garden: The spread of super-naturalism

Behavior is contagious amongst organisms, often referred to as “social contagion” by animal behaviorists. We can see that living things with or without voices are constantly signaling group events with wings, growls, bursting seeds, the release of pheromones, and other means. Whether we are conscious or not, we are triggered. We go to task with […]

Chris Perkins: Howard vs. Diggs matchup could be as good as the Dolphins vs. Bills matchup

There’s two ways to look at the possibility of the Dolphins using cornerback Xavien Howard to shadow Buffalo wide receiver Stefon Diggs in Sunday’s AFC East showdown. The attention-getting, headline-grabbing point of view is that it sets up a titanic matchup between Howard, an All Pro, and Diggs, a fellow All Pro, a matchup that […]