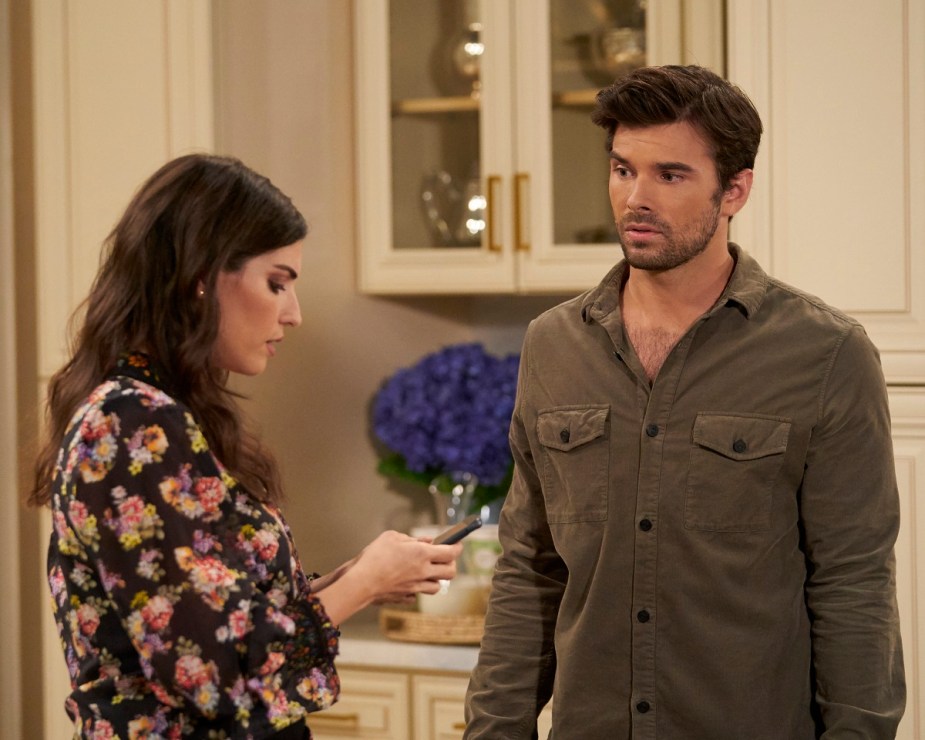 Thanksgiving arrives at the Quartermaine mansion, and the family has much to be thankful for.

General Hospital spoilers for Nov. 28 through Dec. 2 reveal a week of interrogations. A lot is happening with Brook Lynn Quartermaine’s (Amanda Setton) betrayal to Holly Sutton’s (Emma Samms) secrets. Here’s what to expect for the coming week.

Thanksgiving arrives at the Quartermaine mansion, and the family has much to be thankful for. Brook Lynn’s relationship with Harrison Chase (Josh Swickard) is going smoothly. However, this week their relationship hits a roadblock.

According to Soaps.com, General Hospital spoilers reveal Chase confronts Brook Lynn about her secret. After being suspended from the police force, Chase has found a new career as a singer. With Brook Lynn’s help, they’re hoping to make him Port Charles’ next star.

WATCH: Blaze gives Chase some insight into her relationship with Linc. #GH pic.twitter.com/ARJ8hry667

RELATED: ‘General Hospital’: Josh Swickard Reveals How He Feels About Chase and Brook Lynn Getting Together

However, being a cop is important to Chase, and he thought his law enforcement career was over. Unbeknownst to him, the suspension was lifted, but he knows, thanks to Dante Falconeri (Dominic Zamprogna). Chase’s shock continues when he learns Brook Lynn knew about the suspension lift and didn’t tell him.

Chase’s next career move will affect his relationship with Brook Lynn. If things don’t work out for the couple, Chase could find support from his friend Sasha Gilmore (Sofia Mattsson), whom he meets this week.

Holly’s return has created a stir in Port Charles. While Robert Scorpio (Tristan Rogers) was thrilled to see his lady love back from the dead, that joy was soon diminished. Holly confessed to working with Victor Cassadine (Charles Shaughnessy) by framing Anna Devane (Finola Hughes) for Lucy Coe’s (Lynn Herring) shooting.

According to Fame 10, General Hospital spoilers reveal more trouble for Holly when she lands in the hot seat. Will she face more interrogation from Robert? Or will Victor question her dedication to their partnership?

Pregnancy is supposed to be a joyous time, but not for Willow Tait (Katelyn MacMullen). The mom-to-be is battling leukemia, which has now reached stage 4. Time is of the essence to save Willow and her unborn baby. According to Soap Dirt, General Hospital spoilers reveal that Willow is rushed to the hospital following another medical emergency.

Carly knows who Willow’s biological mother is. The problem is: she doesn’t know why that’s important.
Tune into a brand-new #GH – STARTING NOW on ABC! @lldubs pic.twitter.com/wwnJb23z8Z

Meanwhile, Drew Cain (Cameron Mathison) agrees to help Willow search for her biological parents, who might be …read more

In 1966, Bob Dylan was 24 years old and claimed that he had accomplished everything he wanted out of life. He was a successful musician, had met his longtime hero, Woody Guthrie, and, on a smaller scale, had left his hometown behind. When pressed, though, Dylan said there were a few things he still hoped […]