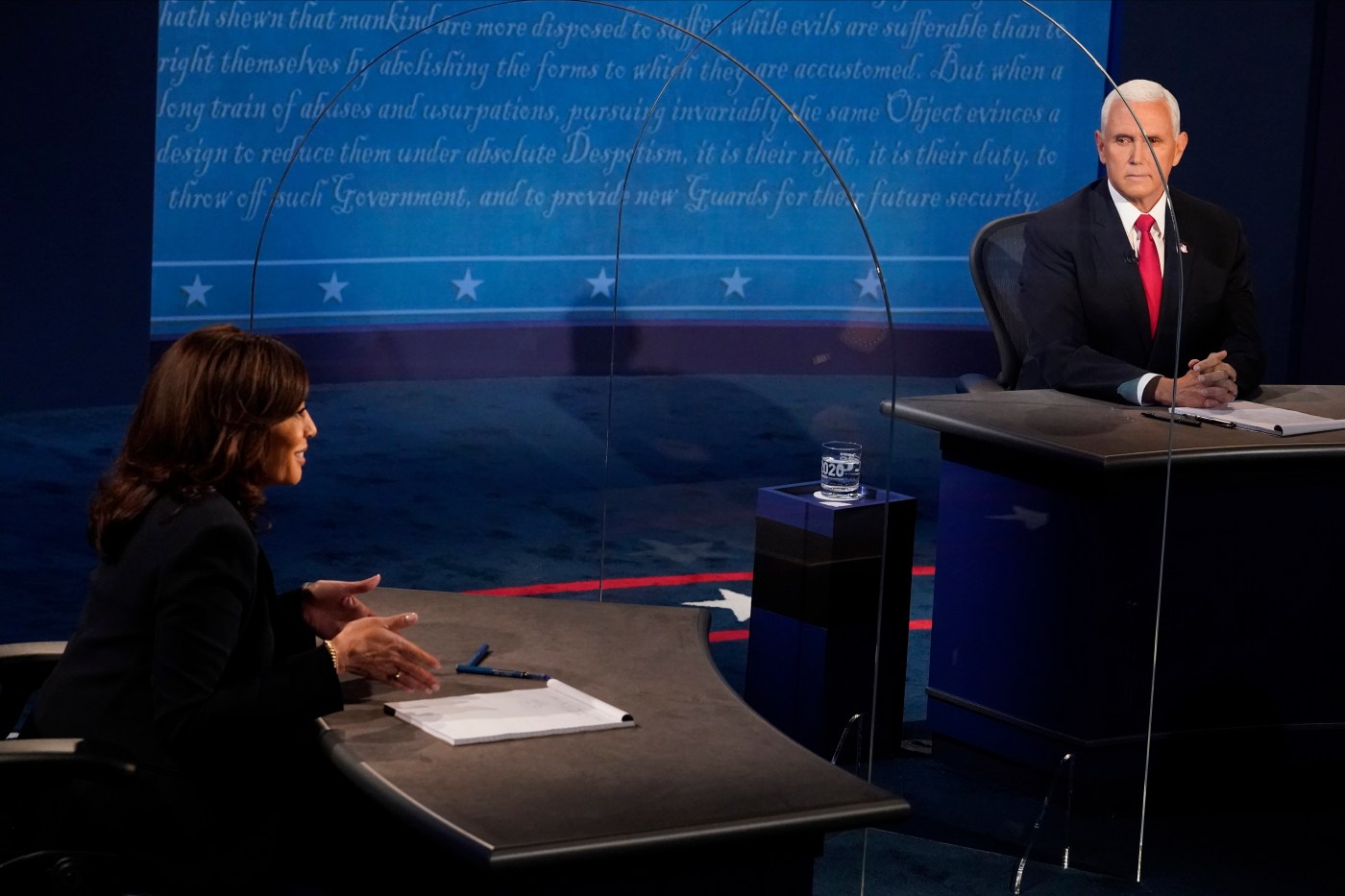 WASHINGTON (AP) — Although more buttoned-up on the stage than his boss, Vice President Mike Pence nevertheless echoed many of President Donald Trump’s falsehoods Wednesday in the one and only debate with Democratic rival Kamala Harris.

Pence muddied the reality on the pandemic, asserted Trump respects the science on climate change when actually the president mocks it, overstated the threat of voting fraud and misrepresented the Russia investigation in the Salt Lake City debate.
Harris got tangled in tax policy at one point and misleadingly suggested that Trump branded the coronavirus a hoax.

Altogether, the debate wasn’t the madhouse matchup of Trump vs. Joe Biden last week. But there were plenty of distortions. A sampling:

ECONOMY
PENCE: “Joe Biden wants to go back to the economic surrender to China, that when we took office, half of our international trade deficit was with China alone. And Joe Biden wants to repeal all of the tariffs that President Trump put into effect to fight for American jobs and American workers.”

THE FACTS: The tariffs were not the win claimed by Pence.

For starters, tariffs are taxes that consumers and businesses pay through higher prices. So Pence is defending tax increases. The tariffs against China did cause the trade deficit in goods with China to fall in 2019. But that’s a pyrrhic victory at best as overall U.S. economic growth slowed from 3% to 2.2% because of the trade uncertainty.

More important, the Trump administration has not decreased the overall trade imbalance. For all trading partners, the Census Bureau said the trade deficit was $576.9 billion last year, nearly $100 billion higher than during the last year of Barack Obama’s presidency.
___
HARRIS, on Trump’s tax cuts: “On Day 1, Joe Biden will repeal that tax bill.”

THE FACTS: No, that’s not what Biden proposes. He would repeal some of it. Nor can he repeal a law on his own, much less on his first day in office. Harris also said Biden will not raise taxes on people making under $400,000. If he were to repeal the Trump tax cuts across the board, he would be breaking that promise.
___
CORONAVIRUS

PENCE, on the Sept. 26 Rose Garden event after which more than 11 attendees tested positive for COVID-19: “It was an outdoor event, which all of our scientists regularly and routinely advise.”

The U.S. Centers for Disease Control and Prevention says large gatherings of people who have traveled from outside the area and aren’t spaced at least 6 feet apart pose the greatest risk for spreading the virus.

Guests were seated close together, not 6 feet apart, in rows of chairs outside. Many were captured on camera clapping backs, shaking hands and talking, …read more

Trump slams ‘disaster’ Fauci as he seeks to rally campaign

The Latest: Harris: GOP wants court to do their ‘dirty work’

WASHINGTON (AP) — The Latest on the Senate confirmation hearings for Supreme Court nominee Amy Coney Barrett (all times local): 1:25 p.m. California Sen. Kamala Harris says Republicans are trying to get the Supreme Court to do their “dirty work” by installing a new justice who will overturn the Affordable Care Act. Harris delivered her […]

SAN PABLO — A Pinole man was charged with felony hit and run but avoided more serious manslaughter charges in an Oct. 5 crash that killed an 88-year-old woman, court records show. Kelly Lynch, 64, allegedly confessed to the 5:15 a.m. fatal hit and run after investigators identified his truck from surveillance footage of it […]