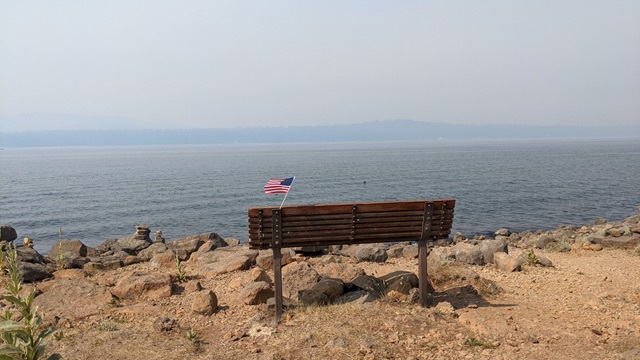 PULGA — Though the Dixie Fire grew by several thousand more acres Wednesday and containment didn’t change, fire officials said crews are making progress and remain optimistic they will get a handle on the fire “very soon.”

The Dixie Fire had grown to 91,628 acres by Wednesday evening. The containment on the fire remains at 15 percent. The fire grew by about 15,000 acres overnight Tuesday, and approximately 6,000 acres between Wednesday morning and evening.

Tony Brownell, Cal Fire operations section chief, led Wednesday night’s briefing going over details of the fire map, which appeared to show significant growth on the north and east sides of the fire, also referred to the as the head, right flank and right shoulder of the fire.

Priority areas included above Bucks Lake, where 40 engines are positioned for structure defense. A spot fire also developed near the Eagle Rock area, which firefighters were working to contain as the top priority, Brownell said.

Cal Fire said 10-15 mile per hour winds with gusts up to 25 mph were expected overnight, and the fire is likely to remain active.

According to Cal Fire incident commander Nick Truax, eight structures, which appear to be a mix of residential and outbuildings, have been destroyed. Truax said the structures all appear to be in the Plumas County areas of Tobin, Belden and Caribou. A team has been brought in to gather more specifics on those structures.

An estimated 1,500 structures are currently threatened.

Though firefighters highlighted progress Wednesday, a number of evacuation orders and warnings were expanded in Plumas County, indicative of the active threat the fire has on several communities.

Wildfire evacuation checklist: Here’s what you need to pack before you must leave
Map of California wildfires now burning
Ready for a public safety power outage? 5 things you probably forgot to do
How to check if your home will lose power during PG&E public safety blackouts

First, a mandatory evacuation order for residents of the west shore of Lake Almanor was issued Wednesday morning by the Plumas County Sheriff’s Office because of the Dixie Fire.

The evacuation area included Canyon Dam. The east side of the lake, which is the more heavily populated side, is now under an evacuation warning, in addition to Chester, Hamilton Branch and the Lake Almanor peninsula.

Evacuation warnings were also added Wednesday evening for Butterfly Valley, Round Valley Reservoir and Long Valley due to the aforementioned spot fire.

An evacuation center was set up at Chester Memorial Hall.

Existing evacuation orders still in place include the Highway 70 corridor from the Butte-Plumas County line, east to the junction of Highway and Highway 89 (The Greenville Wye), Bucks Lake and Meadow Valley.

A shelter has been opened at the Springs of Hope Church in Quincy, located at 59 Bell Lane.

Plumas County Sheriff Todd Johns said his Sheriff’s Office was previously offering escorts for Meadow Valley residents to check on their properties, but that service has been suspended for the time being with fire activity still prevalent in the area.

OAKLAND — A 24-year-old man was in grave condition after a Sunday night shooting in East Oakland that left another man wounded, authorities said Monday. The shooting was reported around 10:04 p.m. Sunday in the 1900 block of Foothill Boulevard near a neighborhood market. Police said the man was part of a group of people […]

The Tamarack Fire grew to the northeast Sunday and joined with the East Fork Fire, according to an update from the Forest Service. As of Monday morning, Tamarack’s area was estimated at 23,078 acres (36 square miles) with no containment. Smoke and weather conditions had prevented a mapping flight to get more accurate information about […]