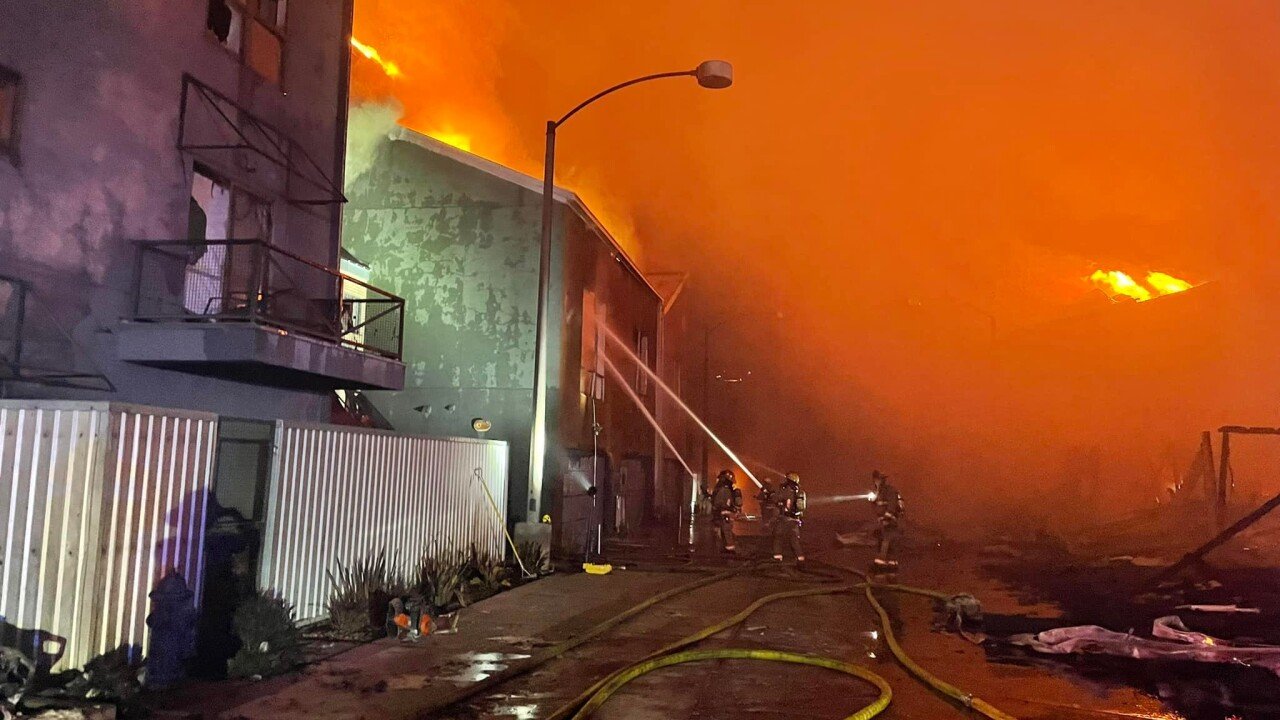 A fire early Sunday in downtown Las Vegas was the city’s biggest in 25 years, the Las Vegas fire agency said.

Firefighters returning from another call shortly before 1 a.m. saw smoke coming from a condominium complex and discovered that a building under construction was already fully involved.

Residents from the complex were awakened and evacuated, and personnel eventually numbering 140 were called to fight the fire.

It was largely controlled by 6 a.m., though crews remained on the scene all day to monitor hot spots.

Another apartment complex and a motel were also evacuated, and at least 100 people went to a shelter set up in a school. The collapse of a power pole caused an electrical outage to a large area of downtown.

One injury was reported, a case of smoke inhalation.

Ten or more buildings were destroyed or damaged, Las Vegas Fire & Rescue said. The accounting of the exact number of residences, businesses and vehicles destroyed or damaged would probably take until Tuesday, the agency said, but it declared the fire the city’s biggest involving occupied dwellings in 25 years.

The gated complex where the fire started comprises about 15 two- and three-story buildings, with two-bedroom condos selling for $350,000 to $400,000. The oldest units were built about 10 years ago, and construction continues at the rear of the 4-acre lot.

The cause remains under investigation.

Allison Lanier as Summer Newman | Sonja Flemming/CBS via Getty Images Allison Lanier plays Michelle Stafford’s on-screen daughter Summer Summer is the daughter of Phyllis and Nick Newman. The mother-daughter relationship between Phyllis and Summer has been anything but perfect. As a teenager, Summer was rebellious and hated her mother. Summer also had an interest […]

Maya Hawke as Robin Buckley and Natalia Dyer as Nancy Wheeler in ‘Stranger Things 4’ | Netflix RELATED: Why Some ‘Stranger Things’ Fans Think Eddie Might Be From the Hawkins Lab The first part of season 4 had characters point out that Nancy and Steve still have feelings for each other. But some Stranger Things […]

The story of the draft-night marriage between Serbian big man Nikola Jovic and the Miami Heat is one of being smitten at first sight. For the Heat, it was catching the skilled 6-foot-11, 223-pound big man at last summer’s Under-19 World Cup in Latvia. There, Jovic was named to the All-Tournament team along with Chet […]