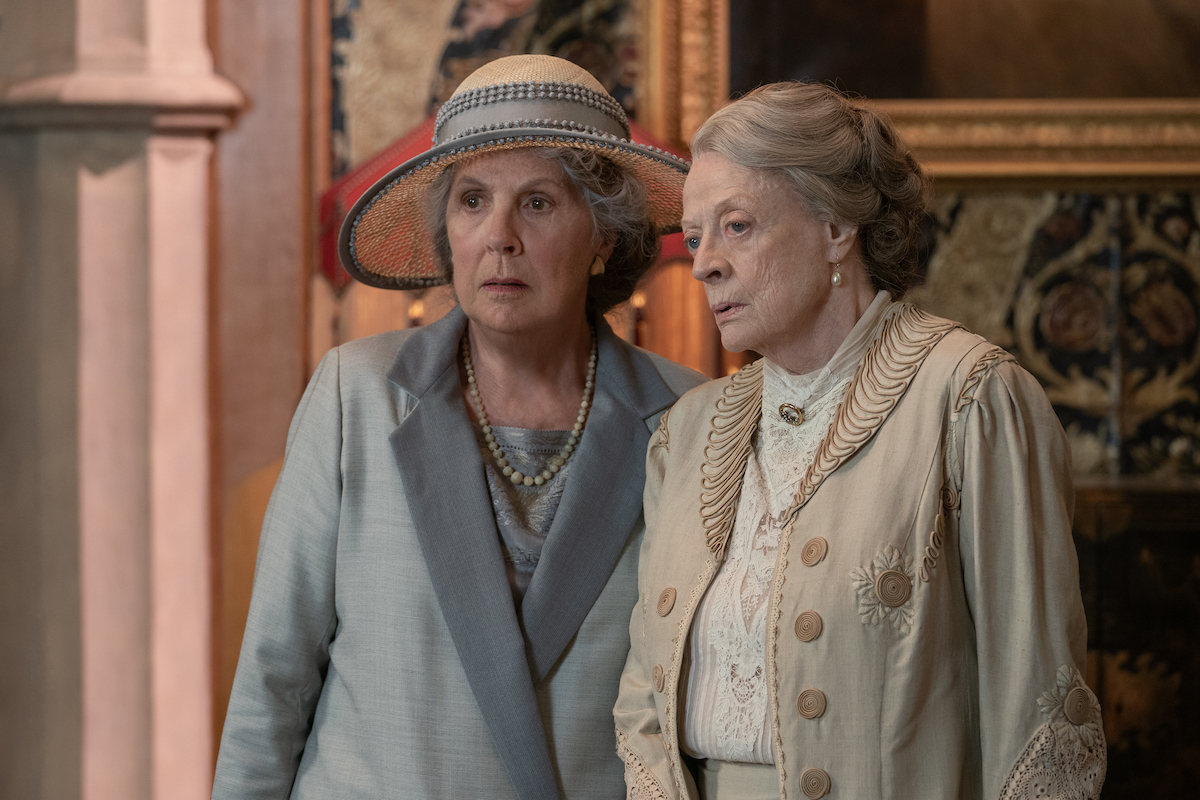 The cast of Downton Abbey has all become famous thanks to the hit show. Creator Julian Fellowes credits Downton Abbey to Maggie Smith. Smith was already a name when he cast her as Violet Grantham, the matriarch of the Crawley clan living in Downton Abbey. Fellowes said Smith was the “get” that attracted the rest of the cast.

Fellowes is hosting a series of fireside chats in anticipation of the release of Downton Abbey: A New Era. We’ll have more with the cast and director of the film before its May 20 release, but here’s what Fellowes said about Smith joining the show.

‘Downton Abbey’ cast Maggie Smith before most other roles

By now, Downton Abbey is one of Smith’s signature roles. Prior to the show, Smith had appeared in the Harry Potter movies, Fellowes’ Gosford Park, the Sister Act movies, and many more since the ‘60s. She’d only occasionally done television miniseries and one-offs.

“I think we knew we were going to sink or swim on the basis of the cast we could attract,” Fellowes said in the video. “I think we knew that there were certain parts that would be our starting point. Violet Grantham was pretty early because if we could attract Maggie into doing her first open-ended series… She’d done terribly smart television with [Capturing Mary director Stephen] Poliakoff and that kind of thing but she’d never done a popular series that just went on and on and on and on.”

The ‘Downton Abbey’ cast wanted to work with Maggie Smith

Fellowes said that casting Smith became a magnet for talent. Downton Abbey would also star Hugh Bonneville, who sat with Fellowes by the fire, as well as Michelle Dockery, Joanne Froggatt, Laura Carmichael, and many more.

“Of course, she was marvelous and came on board,” Fellowes said to Bonneville. “By the time you’d come on board, you started to get the feeling this was a show people wanted to be in.”

Julian Fellowes says there were no bad guys on the show

Bonneville asked Fellowes why he thought Downton Abbey caught on. Modestly, Fellowes said he didn’t know, but speculated it was the good-natured characters. There were few villains, and even they were sympathetic to a degree.

Discover the mystery, picture the possibilities, experience a new era.

Watch the new trailer for #DowntonAbbey: A New Era, and experience the motion picture event only in theaters May 20. pic.twitter.com/rJwPWXPkmw

I don’t really know the answer. I think it’s most of the characters are decent people trying to do their best. The feeling of the show is a positive one. There are very few that you dislike and even the ones you dislike, what I have hoped to do is to explain their predicament so it’s not so simple to …read more

‘Shark Tank’: Barbara Corcoran Revealed a Personal Reason for Joining ‘Dancing With the Stars’ in Season 25

Barbara Corcoran of ‘Shark Tank’ | Christopher Willard via Getty Images Barbara Corcoran appeared on season 25 of ‘DWTS’ Though she gave it her best shot, Corcoran was the first to be eliminated in Dancing With the Stars’ 25th season. Still, the real estate guru had a blast in the process. “It was such an […]