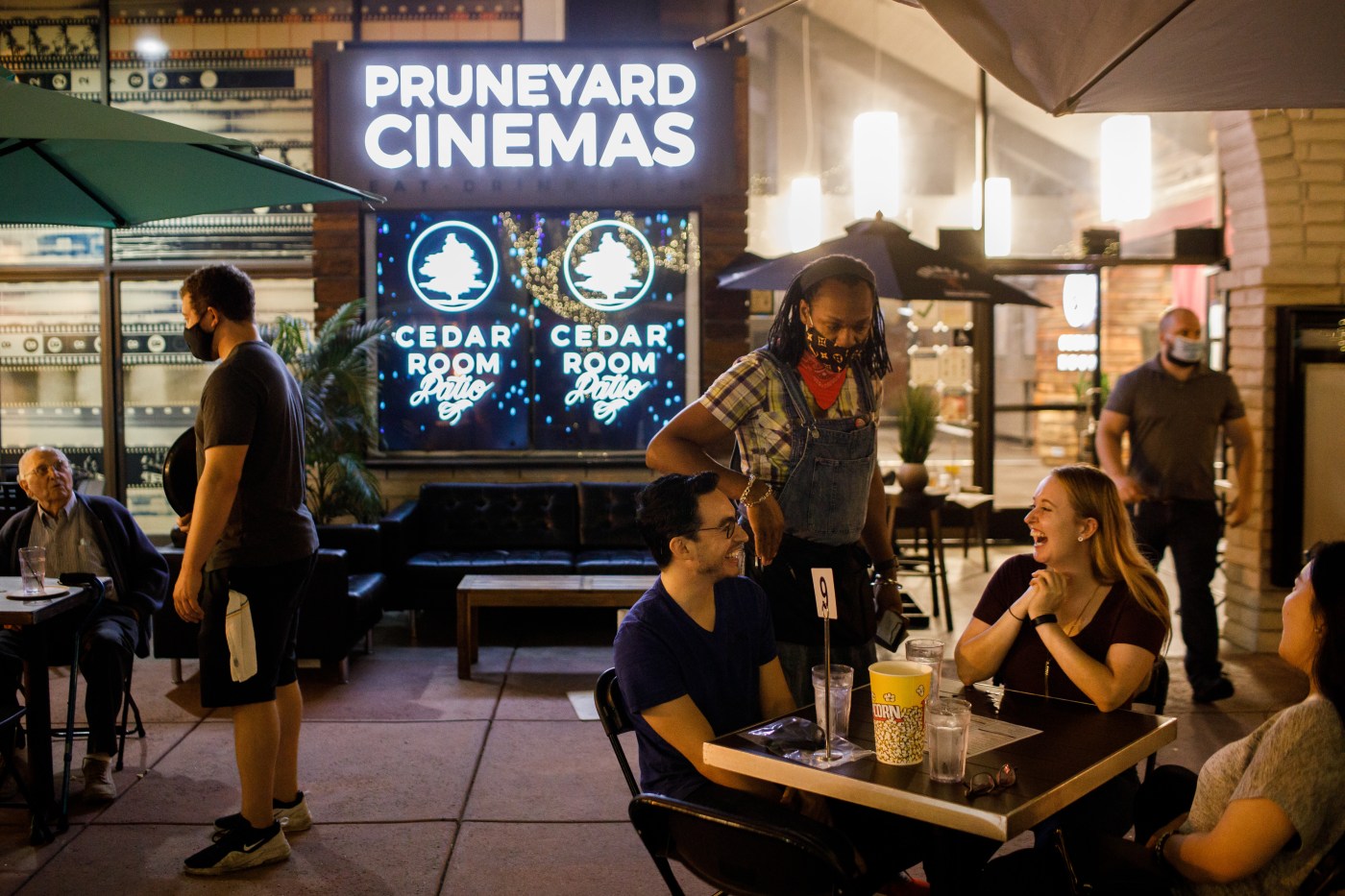 When Santa Clara County moved into the state’s Orange Tier on Tuesday, entertainment-starved movie fans may have been elated to hear that indoor movie theaters were among the businesses being allowed to open at a limited 25% capacity.

But no indoor cinema in the county announced any plans to open its doors this week, and it turns out there’s a really good reason why.

I talked to Dan Orloff of Pruneyard Cinemas in Campbell, which provides an in-theater dining experience, who told me that while the Orange Tier status allows movie theaters to open, Santa Clara County’s Mandatory Directive for Gatherings — based on state COVID-19 guidelines — says indoor gatherings, specifically including movie theaters, can’t serve food or drinks.

“We’re limited to 25% seating, studios aren’t releasing any blockbuster movies right now, and we can’t have food or drink in the theaters,” Orloff said. “That’s our whole business.”

San Francisco Mayor London Breed also banned concessions at that city’s movie theaters, prompting the National Association of Theatre Owners of California/Nevada to announce that its membership had unanimously agreed to remain closed in the City by the Bay. But theaters in several other counties in California have reopened with full concessions.

You can certainly debate how safe it is to spend 2 hours at an indoor movie theater during a pandemic, but it would be nice to have everyone on the same page.

GOOD FOOD, BETTER CAUSE: Hunger at Home, the nonprofit that has served 2 million meals since the start of the pandemic, had a great concept for its annual Bridge the Gap fundraiser — bring together various chefs from around the South Bay and have them provide some of their specialties to guests, along with music and other entertainment.

So how does that translate in the COVID-19 world? Hunger at Home CEO Ewell Sterner and Chief Operating Officer Dinari Brown — who have already pivoted the nonprofit’s food recovery model — turned it into a drive-thru, of course.

This year’s Bridge the Gap gala is Oct. 24 at Earthquakes Stadium on Coleman Avenue, and it will include a five-course meal — designed and prepared by some of the top chefs in Silicon Valley, many of whom also have been lending their talents to Hunger at Home during the pandemic. The menu is pretty mouth-watering with a charcuterie, followed by a fire-roasted corn and blue-crab bisque, manicotti alla bolognese and an heirloom apple and berry crisp for dessert. (A vegetarian option also is available.)

Tickets are $100 per meal, and include wine and a raffle ticket, as well as entertainment during the 20-minute drive. You can select your arrival time slot between 2 and 5 p.m., and Hunger at Home suggests people “dress up from the neck up” for festive photos taken in your car. Check it out at hungerathome.org/bridge-the-gap-gala.

LIFTING UP LOCAL ARTISTS: One of the events I’m always proud to be part of is the Leigh Weimers Emerging Artists Awards, which were presented on Wednesday during an online meeting …read more

The Raiders had their best pass rush of the season against Kansas City mostly without defensive end Carl Nassib, and it may have to continue that way when they resume play following the bye week. Nassib played just five snaps, pressuring quarterback Patrick Mahomes on one play, before departing the game for good. The NFL […]

The La Niña climate pattern is expected to worsen existing drought conditions in California in the coming months, according to a new outlook published by the National Oceanic and Atmospheric Administration’s Climate Prediction Center. The forecast covers the period between Dec. 2020 – Feb. 2021. La Niña refers to the cooling of ocean surface temperatures […]