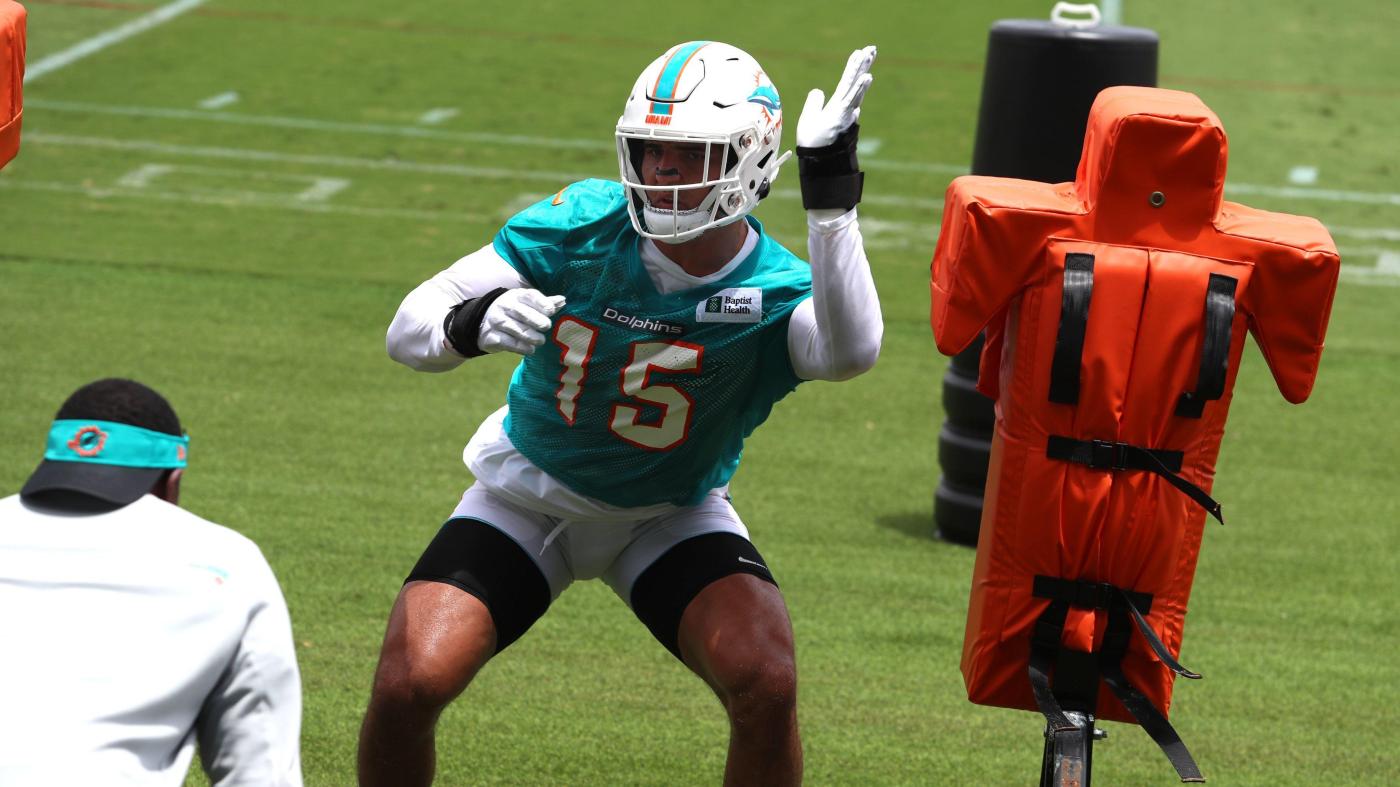 There was one play in the Miami Dolphins’ Saturday practice where the defense brought more pass rushers than the offense had blockers. Quarterback Tua Tagovailoa, as soon as he took the shotgun snap, had to get the ball out of his hands, and it resulted in him throwing almost blindly to a spot over the top and missing wide receiver Tyreek Hill.

It wasn’t a sack. It didn’t create a turnover. But, as Tagovailoa made the safe decision throwing incomplete, the heavy blitz completely disrupted the offensive play design at its origin.

As the Dolphins have gone deeper into training camp, the defense has incorporated more of its patented blitzing under defensive coordinator Josh Boyer after going with a series of vanilla looks through much of the first two weeks.

It has the Miami defense feeling like it’s getting closer to its dominant self that flourished the second half of the 2021 season.

“I think we’re constantly striving to get to that point where we’re really feeling dominant as a defense, so every day is really an opportunity to get better,” said Dolphins outside linebacker Jaelan Phillips. “I think we’ve all been working our [butts] off, so it’s exciting to see everything come together, for sure.”

But it’s still a process in camp for this defense, even as it returned all starters from last season’s second-half surge.

“It’s really a day-by-day thing, and you’re never fully ready. You always got to bring it every day, and that’s really our mindset,” said defensive tackle Christian Wilkins, who wore the orange jersey at Saturday’s practice for being the player of the day in Friday’s session.

“There’s always wrinkles or things we might adjust, but really, it starts with the leaders and just bringing it and having that mindset you’re never really complete as a defense. You’re always looking to improve.”

Aside from merely bringing pressure, the Dolphins’ defensive front has been tested in lateral quickness with Miami’s wide-zone scheme testing the edges.

“That’s been an emphasis for us,” Wilkins said. “We set the tone on the D-line, just kind of running to the ball. As D-linemen, if you set the tone running down the field on a big play, no one else has any excuse. That’s kind of just the standard, pursue the ball always.”

But the defense has also gotten a glimpse of why new coach Mike McDaniel’s offense, with its West Coast elements combined with that outside-zone rushing attack, is so difficult to contain.

“This is probably one of the toughest offenses that we’re going to go up against, just in terms of schematics,” said Phillips. “Being able to train that this early in camp, is really crucial for the rest of the season. Mike McDaniel’s a hell of a play-caller, for sure.

“[The offense] is just very multiple, and they have a lot of movement and a lot of things that are specifically meant to mess with your eyes. Being able to read your keys is one of the most important things …read more

Forty-five years ago, Little Feat traveled to the U.K. and set up shop for a four-night stand — Aug. 1-4, 1977 — at the Rainbow Theatre in London. The Los Angeles rock act then quickly returned to the U.S. where it would play three shows — Aug. 8-10 — at George Washington University’s Lisner Auditorium […]

By Bay City News Service SOUTH SAN FRANCISCO — A South San Francisco police officer received non-life-threatening injuries Friday afternoon after being dragged and forced to the ground following a traffic stop in which the stopped driver restarted his vehicle and sped off. A spokesperson for the South San Francisco Police Department said officers made a […]

Dave Hyde: On a night of nothing, Skylar Thompson showed something for Miami Dolphins

Third-string quarterback Skylar Thompson started the Miami Dolphins’ first preseason game Saturday night, meaning a lot of people betting on second-string Teddy Bridgewater lost in the office pool. The actual starter, Tua Tagovailoa, wasn’t even a consideration to play, which is all good and fine in today’s NFL where preseason has been diminished to the […]