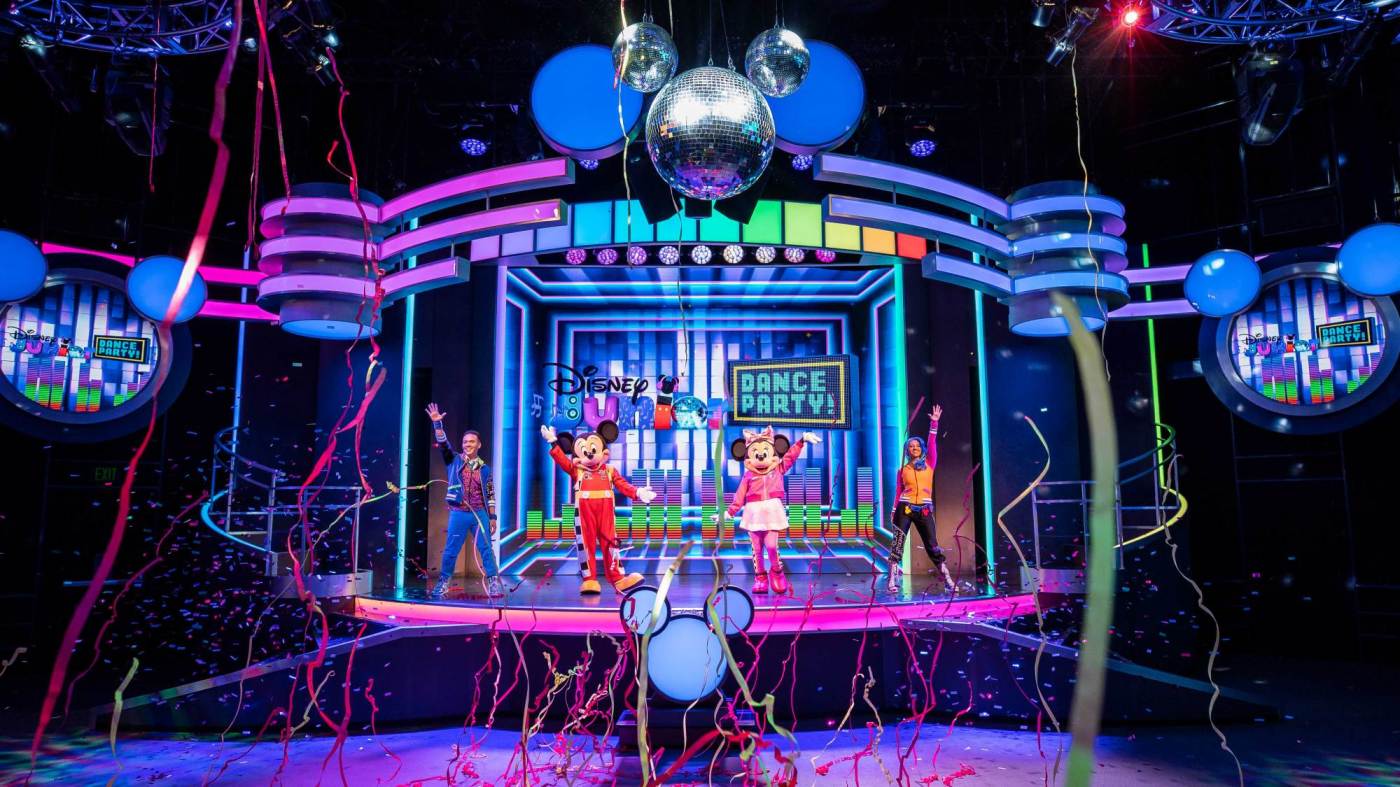 Disneyland is preparing to take the next step toward bringing back live shows and nighttime spectaculars that draw big crowds as part of a phased reopening following the yearlong coronavirus closure that so far hasn’t included large-scale theatrical entertainment.

The “Disney Junior Dance Party” will return Friday, Oct. 15 to its indoor theater in Hollywood Land at Disney California Adventure after a 19-month hiatus due to the extended pandemic closure of the Anaheim theme park and continuing COVID-19 health and safety concerns.

The returning children’s show will be presented in a modified format to allow for physical distancing among visitors and performers. Parents will be seated with their children on the carpeted floor of the indoor theater — a change from previous seating arrangements that had parents sit on bench seats at the back of the theater.

The return of “Disney Junior Dance Party” sets the stage for Disney’s Anaheim theme parks to bring back the Royal Theatre storytelling show in Fantasyland, larger productions in DCA’s Hyperion Theater and Disneyland’s Fantasyland Theatre as well as the “Fantasmic” and “World of Color” nighttime spectaculars that have all remained shuttered out of COVID-19 physical distancing concerns since the parks reopened.

Disneyland and DCA have been slow to bring back live entertainment that attracts large crowds out of continuing social distancing concerns — especially with younger children that are not yet eligible for the COVID-19 vaccines.

State guidelines issued when California theme parks were allowed to reopen in April limited live shows and performances to outdoor settings and restricted indoor rides to 15 minutes out of COVID-19 health and safety concerns. Most COVID-19 restrictions ended in June when state officials fully reopened the California economy after more than a year of pandemic lockdowns.

Disneyland and Disney California Adventure have taken a slow and measured approach to bringing back live entertainment following the pandemic closures.

Fireworks returned in time for the Fourth of July with “Mickey’s Mix Magic” offering pyrotechnics on weekends and video projections, show lighting and lasers during the week.

Throughout the summer, the Dapper Dans, Bootstrappers, Five & Dime, Pearly Band and other atmosphere entertainment have brought live music back to the parks with smaller acts that attracted smaller crowds.

Before Princess Diana married Prince Charles in 1981, she was simply a young woman named Diana Spencer. Diana lived a quiet life with an average job. When she became a royal girlfriend, this status affected her jobs quite a bit. One of Diana’s employers at the time revealed how she found out that her employee […]

An Alfred Hitchcock Movie Went Unmade Because of Walt Disney

Walt Disney | Hulton-Deutsch Collection/CORBIS/Corbis via Getty Images Disney “promptly made a statement that in no circumstances would Hitchcock, maker of that disgusting movie Psycho, would be allowed to shoot a foot of film in Disneyland.”  Hitchcock and Lehman could not work through the ensuing plot snag, and Lehman dropped out of the project. Hitchcock ultimately shelved […]