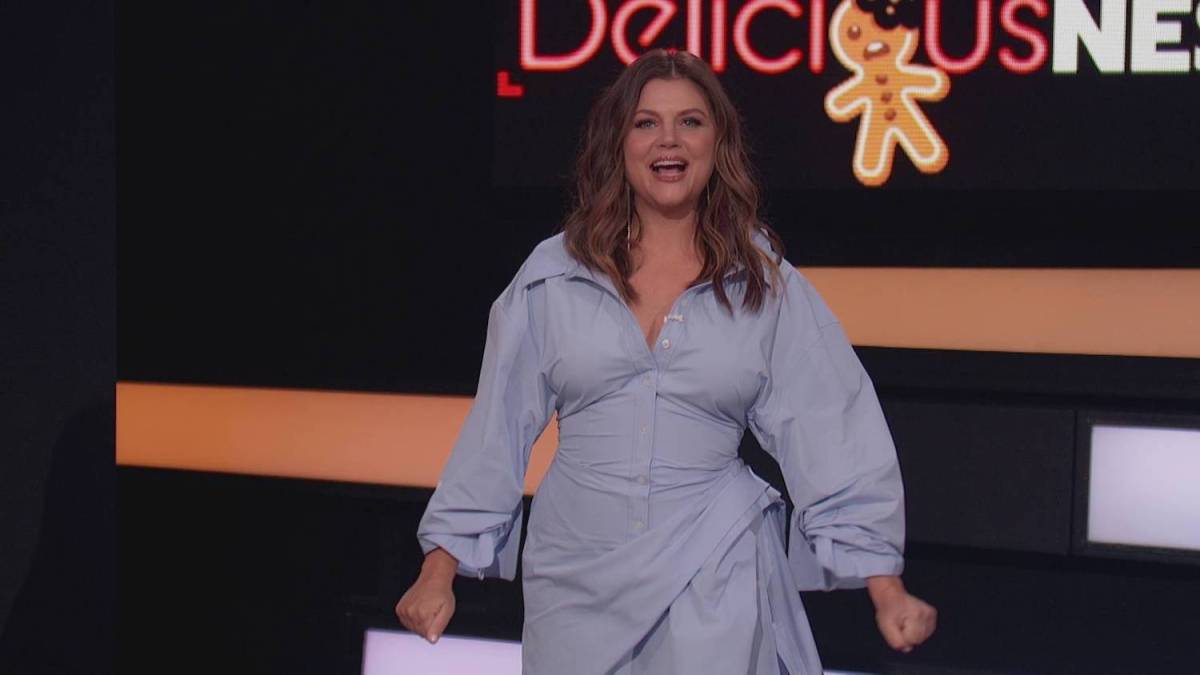 Deliciousness, the food-themed Ridiculousness spinoff, is officially returning to MTV in August 2022 with a week-long 10-episode stint. Find out when to tune in to new episodes of Deliciousness and what to expect from the third season of the MTV series.

On Monday, Aug. 15, beginning at 10 p.m. ET, fans can tune in to catch new episodes of Deliciousness. Episodes will premiere back to back all week long.

Season three of the spinoff series sees the return of host Tiffani Thiessen (Saved By The Bell, Beverly Hills 90210). What’s more, Thiessen’s fellow foodies Angela Kinsey (The Office), Kel Mitchell (All That, Kenan & Kel), and TV and internet personality Tim Chantarangsu (Wild N’ Out) all return to the couch to critique some of the funniest food fails.

As with previous seasons of Deliciousness, the cast will celebrate the greatest indulgences as they share the internet’s most viral and entertaining food videos. With moments from food blunders to kids cooking in the kitchen and epic restaurant fails, season 3 returns with some of the most entertaining food-filled videos yet.

Deliciousness is produced by Thrill One Media (formerly Superjacket Productions) and Gorilla Flicks.

Showbiz Cheat Sheet spoke with Mitchel earlier in 2022 about the third season of Deliciousness. At the time, he was still filming new episodes. Naturally, we had some questions about the filming process — mostly, do Mitchell and his castmates get to see the viral videos before discussing them on the show?

“So they’ll tell us what’s kinda going to come up,” Mitchell explained over Zoom. “But we never see the video first like we used to.” When Deliciousness began, Mitchell, Kinsey, Chantarangsu, and Thiessen would receive a Google drive of the clips they were going to discuss in an episode. That has since changed.

“But then we were like, ‘No, it’s fun to have that first reaction of … really seeing it on the couch,’” Mitchell added. “That [has] been so awesome. Now we just go into it blindly and see these crazy food fails. I can’t believe [there are] so many food fails.”

As revealed during our call with Mitchell, fans can expect nothing but laughs in the upcoming episodes of Deliciousness. “We definitely step it up this season,” Mitchell teased. “It’s [the] third season, so we can’t even believe it. It’s crazy. I hope we go as long as Ridiculousness [has] —they’re on season, I don’t know, 20 or something like that.”

Where to stream episodes of ‘Deliciousness’

Deliciousness will air on MTV, but fans can access previous episodes of the series through Amazon, Google Play, iTunes, and Vudu. They can also stream episodes of Deliciousness on MTV.com or with a Paramount+ subscription.

Tune in to see new episodes of Deliciousness beginning on Aug. 15.

RELATED: ‘The Office’ Actor Angela Kinsey Is a ‘Hot Mess’ in the Kitchen

Every Time Justin Bieber Was Linked to a Kardashian-Jenner Sister

Freddie Mercury transformed music forever as the lead singer of the band Queen. The icon received the biopic treatment with 2018’s Bohemian Rhapsody, named after one of the group’s most iconic songs. To do Freddie Mercury justice, Rami Malek had to fully immerse himself in the character — including taking on his accent.  ‘Bohemian Rhapsody’ […]