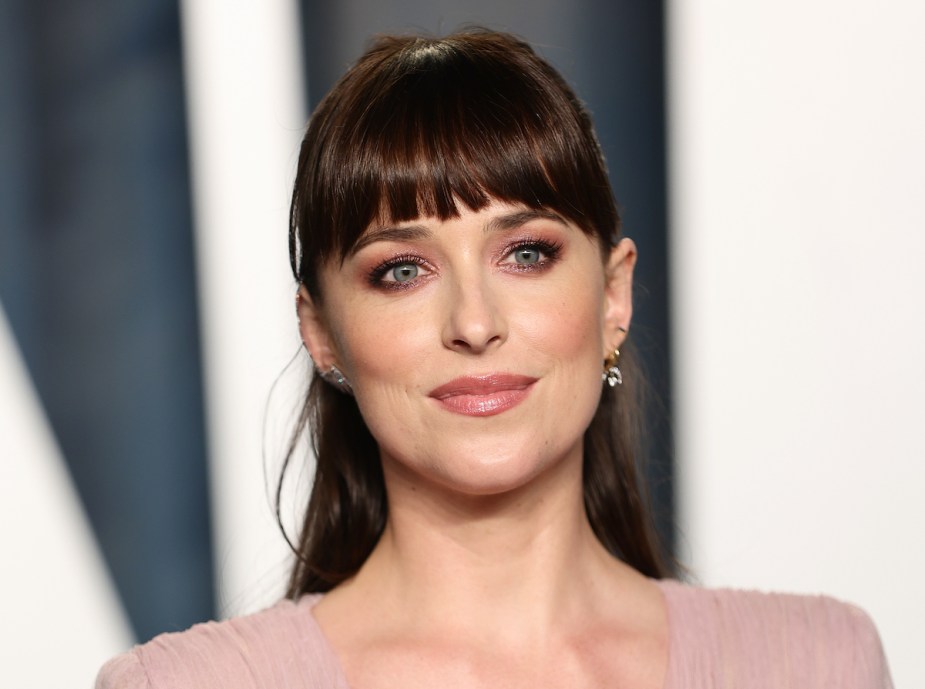 Dakota Johnson’s sneaky smile in Netflix’s Persuasion might involve more than just the clever fourth-wall-breaking dialogue of her character, Anne Elliot. In a recent interview, Persuasion costume designer, Marianne Agertoft, reveals a secret about Johnson’s gorgeous Regency-era costumes — or rather, what’s beneath them.

Much of Netflix’s Persuasion is built upon the traditional but includes somewhat surprising flourishes. For instance, the film remains firmly rooted in England’s Regency Era as was Austen’s original work. However, the movie’s sets break from the expected pale palette of the time, featuring rich, vibrant jewel tones instead.

Likewise, Anne’s wardrobe consists of period-appropriate dresses with flared collars reminiscent of the style made famous by rocker Patti Smith.

Netflix’s feisty iteration of Austen’s heroine commonly stomps around in boots similar to the combat boots popular today. Considering these touches, it should be no surprise that unconventional choices were also made regarding Elliot’s undergarments.

In an interview with Vogue, Agertoft says, “We decided that Anne would wear men’s underwear because women at that time didn’t really have underwear.” Agertoft continues, saying the choice was “inspired by the underwear men would have worn in the army and Dakota felt really at home in it.”

For those who are unfamiliar with men’s underwear from the early 19th century, The Conversation states that the underwear of the time was “bifurcated drawers with separate legs — a loose type of knee-length trousers suspended from the waist.” These types of drawers were also crotchless, a feature that “made relieving oneself more manageable.”

A closed-crotched style of drawers for women was introduced later, around the middle of the century. By the early 1900s, women’s attire included several types of undergarments.

Known for her Fifty Shades role, Johnson’s portrayal of Anastasia Steele often left little to the imagination. In a recent interview, Johnson revealed needing to glue her underwear (in this case a strapless thong — is that a real thing?) to her body.

“I had these sort of strapless thongs that had glue on them,” Johnson says, “It’s not glue, but it’s sticky…” Yet the actress says even that wasn’t enough. “…the adhesive would wear out, so then they would superglue it to my body so that it wouldn’t fall off.”

Johnson’s wore two layers of the pseudo-underwear and her co-star Jamie Dornan also donned a sort of covering. However, she says the intimate scenes from Fifty Shades of Grey, Fifty Shades Darker, and Fifty Shades Freed never got easier: “No, it’s never easy. It’s not casual and it’s not fun. It never got easy.”

Following the final installment of the Fifty Shades franchise (Fifty Shades Freed) in 2018, the actor made a cameo …read more

DEAR JOAN: I am moving from a house with yard to a fourth story apartment with my 8-year-old King Charles cavalier pup. How can I train him to use paper on a terrace so I don’t have to take him a long distance to the outside? He has had spinal fusion surgery causing him difficulty […]

The Yankees invited some of the heroes of their storied past to the Stadium Saturday. With no Old-Timer’s Game after extensive introductions, however, they just had to sit back and watch as the Yankees current hero continued to crush this game they played. Aaron Judge hit his major league-leading 42nd home run in the second […]

TL;DR: Bruno Mars wanted to write something better than The Beatles’ songs.He said that sort of ambition causes artists to write their worst work.He wrote one of his hit songs after he started to relax and unwind. The Beatles’ Paul McCartney, Ringo Starr, John Lennon, and George Harrison | John Pratt/Keystone/Getty Images Bruno Mars wanted […]