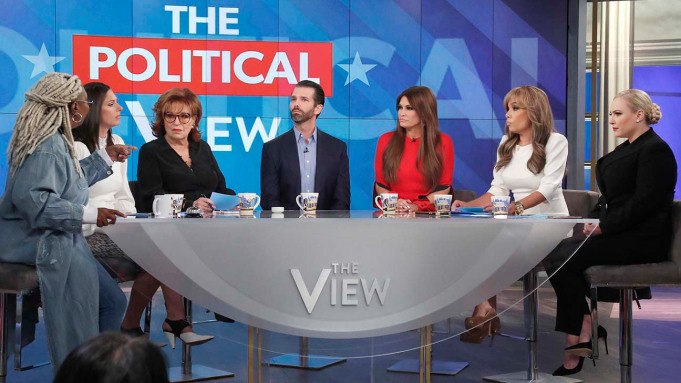 With the looming departure of Meghan McCain from “The View,” ABC is scrambling to find a another right-leaning co-host and may be considering an even more extreme replacement, according to a report in the Daily Mail.

“It’s chaos behind the scenes at ‘The View,’” the insider said. Joy Behar is “openly moaning” about the departure of McCain, her regular on-air enemy.

“Joy has only just realized that they could be getting someone much further right on the political spectrum than Meghan, who won’t put up with her crap,” the insider added.

Guest host Ana Navarro is vying for a permanent seat on the morning talk show, but the insider claims she won’t get the job because she was a vehement Trump critic, and the show is eager to attract a co-host who supported the former president, the insider said.

“We need to hire a Trump Republican to reach more of the available audience at home,” the insider said.

Critics of “The View” would be justified in wondering if ABC wants someone to replicate the drama that McCain regularly stirred up with her sometimes off-the-rails spats with her liberal counterparts, particularly with Behar and Whoopi Goldberg.

McCain, who aggravated many by regularly invoking the name of her late father, U.S. Sen. John McCain, announced that she was leaving “The View” at the end of this month. She said she was leaving for family reasons.

Guilfoyle’s name is in the mix to replace McCain because ABC tried to recruit her for “The View” several times when she was on Fox News, the insider added.

The ex-wife of California Gov. Gavin Newsom, and former San Francisco deputy district attorney, would “be great as she would literally prosecute the other members of the panel every day of the week,” the insider said.

“The View” also garnered some of its highest ratings when Guilfoyle and her boyfriend, Donald Trump Jr., stopped by the show in 2019, the insider said.

Trump Jr. memorably got into a sparring match with Behar after challenging her over her admission that she wore blackface when she once dressed as a Black woman for Halloween. Whoopi Goldberg also reportedly admonished the audience during a commercial break because they booed Trump Jr. and Guilfoyle.

The couple prominently campaigned for Donald Trump in the 2020 election and are key proponents of the former president’s MAGA-world view. Guilfoyle has been called “MAGA-world’s Eva Peron” after she screamed out her speech endorsing Trump at the Republican National Convention.

The insider, however, didn’t address whether Guilfoyle’s Trump support could be too extreme, even for a ratings-hungry “The View.” Notably, Guilfoyle spoke at a rally preceding the Jan. 6 insurrection, urging attendees to “fight” to overturn the results of the election.

Guilfoyle could be a problematic hire in other ways. She has been the subject of reports in the New Yorker, Politico and a new book about how she talked or acted in …read more

It’s too bad Dona Rose’s arms aren’t longer. She would be able to pat herself on the back. Not that the 80-year-old retired auditor needs self-congratulations. She has the gratitude of the entire hummingbird population. Led by Rose’s letter-writing campaign — plus a petition and plan to contact state officials as an insurance policy — […]

A giant Confederate flag went up in the Ozarks. One woman answered with a billboard

Robert A. Cronkleton | The Kansas City Star KANSAS CITY, Mo. — After a giant Confederate flag was erected this past winter along a popular route to the Lake of the Ozarks, Amanda Burrows of Tuscumbia, Missouri, felt compelled to respond. The flag, she believes, is an “outdated symbol of racism.” “I didn’t think it […]

Bankrupt hotel in downtown San Jose might not reopen in 2021

SAN JOSE — A bankrupt hotel in downtown San Jose might not reopen until December — if then — based on a new proposed timetable for the hotel’s owner to file a plan to revamp its shattered finances, court papers show. The current schedule eyed by the owner of the bankrupt Fairmont San Jose, located […]