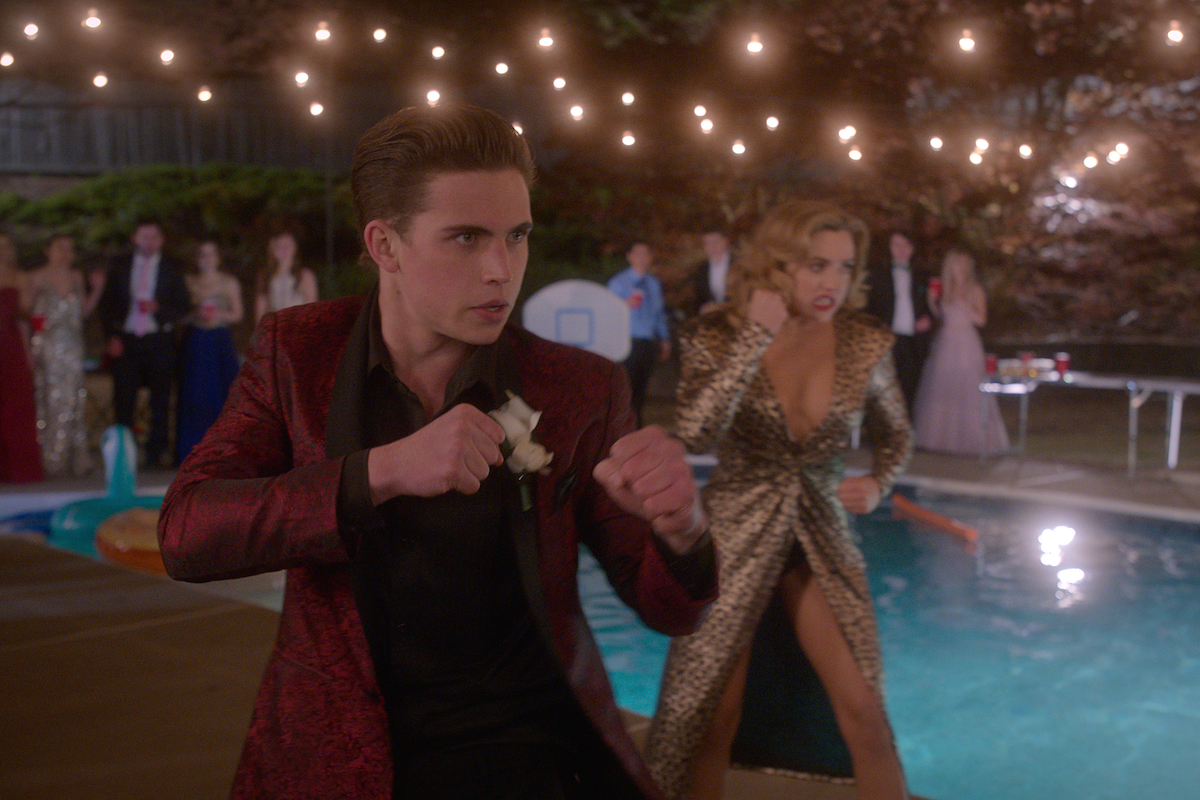 Cobra Kai star Tanner Buchanan admits he tends to swear when he ruins a take.
Tanner Buchanan’s swearing got so bad producers had to reprimand him.
There are many Cobra Kai actors who are under 18.

Cobra Kai is a family show. It’s rated TV-14 so the worst words they’ll say are damn and sh**. Apparently, some of the cast members work blue behind the scenes. Tanner Buchanan, who plays Robby on Cobra Kai, copped to dropping swear bombs between takes.

Buchanan joined his co-stars on stage for Cobra Kai: Live and Badass on May 5. During a trivia game, moderator Kristian Harloff asked the cast who is most likely to curse when they mess up a take. Cobra Kai Season 5 premieres Sept. 9 on Netflix.

Tanner Buchanan admits to swearing on the ‘Cobra Kai’ set

Buchanan plays Robby Keene, Johnny Lawrence (William Zabka)’s estranged son. It’s been a rocky road for Robby. He trained with Daniel LaRusso (Ralph Macchio) to get back at his father. He broke Miguel (Xolo Maridueña)’s back in their high school fight. After going on the run he ended up in juvie. Then he went back to John Kreese at Cobra Kai, although season 5 promises a reconciliation with Johnny.

When Harloff asked the question, several cast members pointed to Buchanan and said, “Tanner” in unison. Buchanan did not deny it.

“Me, I know that one right away,” Buchanan said.

Neither Buchanan nor his Cobra Kai co-stars would give examples of Buchanan’s curse words of choice. Mouser revealed it got so bad that the bosses had to step in.

“Tanner got a talking to actually,” Mouser said.

When Harloff suggested Buchanan’s mom scolded him, Buchanan joked, “I learned it from my mom.”

Our New Year’s tradition just got bumped up a few months. Cobra Kai Season 5 drops Sept 9, only on Netflix. pic.twitter.com/zwV47yCG5z

Had it been Cobra Kai creators Jon Hurwitz, Hayden Schlossberg, and Josh Heald, Buchanan probably would have named them. He just alluded to some unnamed producers who stepped in regarding his behavior.

“I got it from some of the producers that maybe I should just try to quiet down some of it, some of the bad words on set,” Buchanan said.

There are kids around

It is understandable that the Cobra Kai producers would want to maintain a wholesome set. There are a lot of young actors on the show. Robby didn’t have many scenes with Anthony LaRusso (Griffin Santopietro), but many of the Miyagi-Do and Cobra Kai students were younger than Buchanan.

Bert actor Owen Morgan was 14 when Cobra Kai began. Nathaniel actor Nathaniel Oh was only 12. Even as they got older, new young …read more

Dear Abby: I know they’ll ask where my husband is. What should I say?

DEAR ABBY: My former husband and I have been divorced for more than two years. We had our wedding reception in a club with live music, and we would go there every Saturday night to listen to the music. We were divorced shortly after our marriage because he had frequent violent outbursts. After our divorce, […]

Photos: Golden State Warriors sing the Memphis blues during epic loss to the Grizzlies in Game 5

MEMPHIS, Tenn. — Draymond Green had a message for his teammates ahead of Game 5 of the Western Conference semifinals. “Bring your hard hats,” Green told the team, according to acting head coach Mike Brown. “It could be ugly.” He was right — but not in the way he intended. As Memphis fans waved golden […]